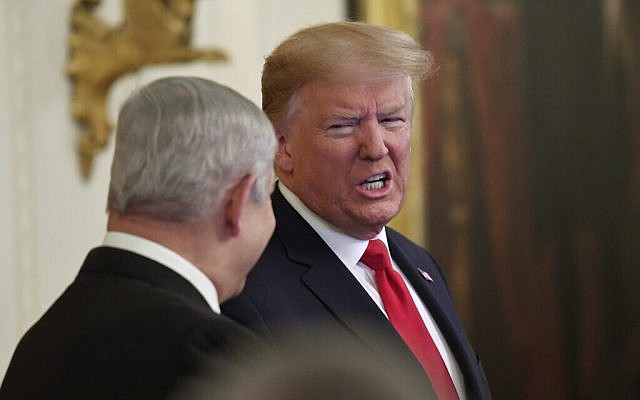 The disgraceful presidency of Donald Trump is winding down exactly as a master storyteller would have scripted: a megalomaniac schemes to overturn his election loss as decent people everywhere watch in fascination, wondering if the coup attempt could possibly succeed.

The leaders of important U.S. allies like Britain, France, Germany, Japan, South Korea and Australia have spoken to Joe Biden in recent days, offering congratulations, planning a resumption of rational relations and receiving assurances that the Democratic victor will indeed assume the presidency on Jan. 20.

Not so Benjamin Netanyahu, who also has refrained from referring to the Democratic victor as “president-elect” and is plainly hedging his bets that Trump’s gambit might succeed.

It is the type of gambit that can end up being enabled by people refusing to believe that it could possibly exist. That is a matter of psychology: human beings have a strong instinct to deny the existence of evil. When confronted with it, we prefer to see stupidity,  randomness or insanity instead.

Trump may be ignorant but he is neither stupid, random, nor insane. He is following a very clear plan, and anyone with a stake in how it plays out – which definitely includes Israelis – should be clear-eyed about what is going on.

Trump must have known he had excellent chances of losing the 2020 election. The Republicans have won the popular vote just once since 1988. They are supported by a minority of Americans overall, and stick mulishly to unpopular positions on important issues including healthcare, taxation, gun control, abortion and climate change.

The Republicans’ ability to retain any power rests on gerrymandering, voter suppression among minorities and machinations that are technically legal but outrageously unfair, combined with the Electoral College presidential system and a Senate setup that both vastly overrepresent rural states and their conservative populations (in a presidential election, a voter in Wyoming is worth 70 in California – no joke).

Even with these advantages, eking out a victory has generally rested on absurdly close elections in a handful of states. In 2000 it came down to a few hundred votes in Florida and a Supreme Court intervention, and the 2016 election was decided by tiny margins in Pennsylvania, Wisconsin and Michigan.

This situation allows the Republicans a good shot at the White House even in the highly probable event that if they never win anything close to a national majority again. But people had at least assumed that they would not try to further cheat their way to victory when losing the Electoral College. That assumption is now proving to be naïve.

These are the steps in the emerging Republican plan to steal an election that Biden has apparently won by more than 5 million votes, a three percent margin and an Electoral College majority of 306-232:

This plot depends on enough people being dumb enough to believe the lies, cynical enough to pretend, or just obsessed enough with the Republican agenda to go along with anything.

It furthermore relies on the cult Americans have made of their constitution; the above-described electoral theft may not be moral and may shatter every norm, but it does not, in fact, violate the US Constitution (similar to how in Israel a prime minister serving while on trial may be preposterous but does not violate the Basic Laws).

Critically, it depends on the Republican Party being willing to stage a coup d’etat. Is it?

It’s clear the party leadership believes the Trump scam is backed by many of their voters; an Economist/YouGov poll conducted in the days after the election showed an astounding 86% of Trump voters claiming Biden did not legitimately win.

And because the storytelling is so good, the Republicans will need Trump voters very soon, in an unprecedented way: they must win the two Senate seats up for grabs in the Jan. 5 runoff in Georgia to retain control of the Senate. That would enable them to block Biden at almost every turn, as they would surely do.

Whatever happens, Trump will be rousing his rabble for some time to come, remains a potential Republican kingmaker, and may run again in 2024. So Republican leaders are keeping their mouths shut right now, however shameful they surely know this to be.

That’s understandable, but it is also evil.

It is evil because the United States needs a government that has credibility and enjoys legitimacy at the height of a pandemic that has already claimed about a quarter million American lives and requires difficult decisions to be made.

It is evil because the last thing the world needs is for America to present as a banana republic and for cynicism about democracy to further deepen.

And it is evil because while it will very likely fail it just might succeed. And if it does – if Trump stays in power by abusing the system to the breaking point – the United States will have an illegitimate government. And I do not think that will go smoothly.

Netanyahu is projecting that he has no problem with all this and that he would welcome Trump finding a way to hold on, however devastating that would be to the stability of Israel’s most important ally. He risks poisoning Israel’s relations with the incoming administration through this dirty dance with Trump.

But then again, this is the man who appeared in Congress to lobby against a Democratic president during the dispute over the nuclear deal with Iran.  He is all in. And he probably cares what happens to Israel in his wake about as much as Trump cares about America.

Furthermore, the prime minister has himself done the once-inconceivable by hanging onto power despite being on trial for bribery, fraud and breach of trust – charges that seem to be the tip of his corruption iceberg.

Netanyahu has ample reason to root for the nasty and explosive precedent of Trump hanging on. It will make it easier for him to try a version of the same, a few months down the road.