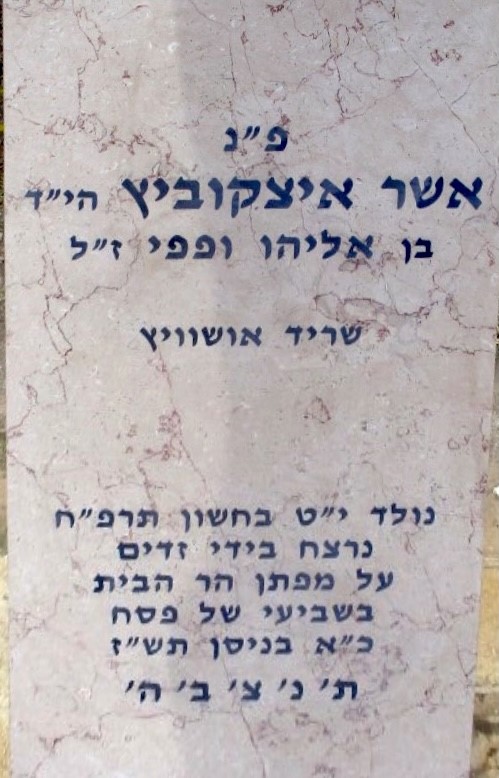 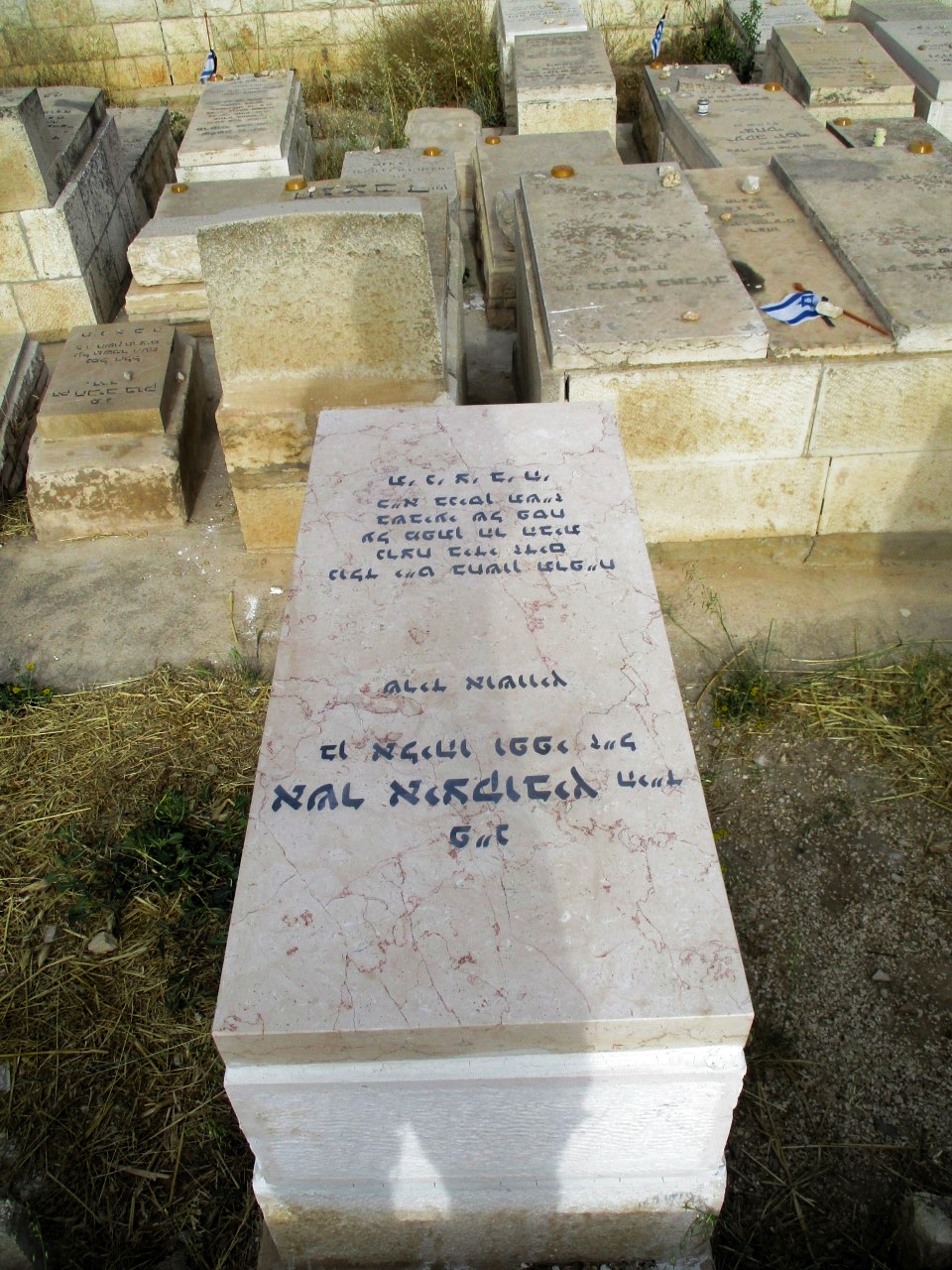 Asher Itzkowitz was murdered, beaten to death by enraged Muslim thugs after he mistakenly made a wrong turn in the warrens of Jerusalem’s Old City streets.  He was making his unfamiliar way to the Wall to pray.  It was the last day of Pesach, April 11, 1947.

His crime, being Jewish and getting too near the gate to the Temple Mount.

What mattered on April 11, 1947 was the hated Jew pay the price.  It was bad enough the Jew was on “Muslim land”. It was intolerable to the fanatics that a Jew might reach the Temple Mount.

Asher Itzkowitz was born November 14, 1927 to Pepi and Elijah, an observant family in Irhof, Czechoslovakia.

Asher’s life was uneventful as the dark clouds of the Holocaust gathered.  He attended public school with his siblings. He lived a quiet Jewish life and minded his own business until the Nazis came.

When he was finally liberated from Auschwitz, his parents and family were all dead, except for a sister.  He had no home.

Like many displaced refugees, he could not return to their former lives. Their former lives no longer existed. Asher sought a new life, a new start in Palestine.  He linked up with a Dror group that had secretly acquired a dilapidated Turkish ship renamed the Yagur after the Kibbutz the British had bulldozed in vicious retaliation on Black Shabbat.

The Yagur was seriously overloaded with 756 desperate refugees in Marseille. The plan was to run the British blockade and ferry Jewish survivors to safety in Palestine.

At sea, the Yagur was captured by two British destroyers.  She was taken to Haifa harbor.  The refugees were forcibly removed, August 13, 1946. They were transferred to the newly modified WWII cargo ship, the Empire Rival. The Empire Rival was a floating prison for Jewish illegal refugees who tried to run the British Palestine blockade.

The purpose of the British Blockade was to keep Jewish refugees from immigrating to Palestine.  It was an agreement the British had with the Arabs to keep the Jews out.  Only where could the Jews go when no one wanted them except for Jewish Palestine?

The Empire Rival heaved anchor for the newly created Jewish detention camps built for them in Cyprus. Asher, liberated from Auschwitz only 19 months earlier, was sent to another concentration camp for Jews run by the British.

Late 1946, Asher was given a quota certificate and permitted to legally enter Palestine.  He promptly located to Jerusalem, where he made his modest living working in a carpentry shop. Five months later, on his way to pray to God, offering thanks for liberation at the end of Pesach, he was dead…

The Empire Rival would continue its dark work of Jew ferrying.  Three months after Asher was dead, the Empire Rival was one of the British prison ships that became the worldwide focus leading to the Birth of the Jewish State.  July 1947, the Empire Rival was loaded with over 1500 desperate Jews in Haifa Harbor, again forcibly removed from a badly damaged, half-broken down American rescue ship dangerously overcrowded with more than 4,500 Jews.

The ship had been attacked in international waters by a flotilla of British warships. The British were perfectly willing to sink the refugee ship and drown all 4,500 refugees on board.  The Captain of the ship was Ike Aronowitz.  The leader of the mission was Yossi Harel.

The broken ship limped into Haifa harbor, having been horrifically damaged by ramming. British shock troops boarded, killing unarmed crew and passengers, beating the refugees into surrender. Journalist Ruth Gruber observed the scene as the ship pulled into Haifa Harbor. Her decks were packed with Jews singing the Hatikvah, the Hope. Gruber later renamed the ship, the Ship that Launched a Nation.

The damaged American hulk that carried the refugees to Haifa Harbor was the Exodus.

The British beat, carried and forced the Jewish refugees off of the Exodus into the barbed wire covered holds of the Empire Rival.

The refugees expected to be taken to Cyprus. The British had different ideas.  They were going to teach the Jews a lesson. The Empire Rival was not headed to Cyprus but ended up returning to Germany, discharging her human cargo back into the former German concentration camp.

Asher Itzkowitz was beaten to death by vicious Jew-haters just outside the closed gates to the Temple Mount. His broken body was modestly buried on the Mount of Olives the next day. The British feared the large Jewish funeral procession, so they limited access to his burial.

His grave was covered with an inexpensive stone. Over the years, it deteriorated, breaking into almost illegible crumbling pieces.

Asher was only twenty years old when his life ended was stolen.

April 1, 2021, Yisrael Medad wrote an article about Asher in the JPost.  He lamented Asher’s tragic story with so many paralleled ironies of contemporary Israel. Today, Arabs are rioting against Jewish legitimacy in Jerusalem for trying to reclaim their stolen homes.

“There is no memorial plaque near where Itzkowitz was murdered. He lies in a forsaken nearly unmarked grave.”

The Jewish American Society for Historic Preservation has a lot of experience restoring memory with dignity and honor.

In February, the Jewish American Society for Historic Preservation (JASHP) restored the disgracefully deteriorated grave of Shmuel Cohen, the musical composer of the Hatikvah. JASHP knew what needed to be done, how to do it and was willing to pay that it be done.

May 10, Jerusalem Day, as terror rockets crashed into Israel, Asher’s gravesite was restored to dignified memory.  He rests just a few rows from the graves of Menachem Begin and his beloved wife.

Asher has a small, obscure memory on another site in Jerusalem. Mt. Herzl is where the Memorial Wall to the civilian victims of Terrorism stands.  Its first entry dates back to 1851. Over 4,000 civilian victims of the contemporary euphemistically termed “Liberation Movement” from the Jews are memorialized.

Asher’s story and his picture can be found on the Memorial’s searchable website. Asher was an innocent young man who had seen much horror and suffered unimaginably.  He longed for his new life in Israel.

JASHP was honored by the opportunity to do the right thing for Asher.

May God give all their souls rest,