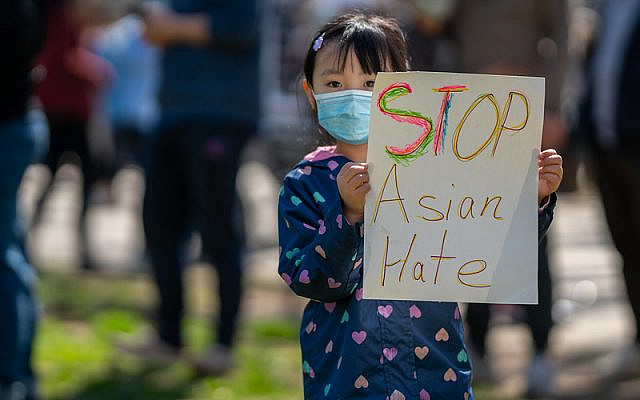 Last week I wrote an article about the Asian hate that’s going around in the United States. It was an angry article. It was not a good article. I’m glad I didn’t publish it.

Seeing Asian anger at the hate, I felt that Asian people are angry about hate that has been around since Trump’s infamous words about Mexicans. Jews knew to expect this increase in hate. When the expected attacks occurred, Jews had the usual response: to complain about it to be outraged and to expect others to be outraged about it and with the goal that others would come to our aid and stop it. Of course, no one ever does. Something that we should have learned from Holocaust, which was the reason why Israel was created because it was understood that if we don’t stand up for ourselves, no one else will.

So when #StopAsianHate took off, filling all of my social media and soon after all mainstream media, I felt betrayed. I felt betrayed by Americans who stood with Asian Americans but did not stand with Jews. I was also angered with the Asian American community and their request that we all stand with them against hate. I felt that Asian Americans ignored the rising hate directed at so many groups over the years and were only now speaking up after the hate came to them and are expecting everyone to help them stop it. I felt like they were not good allies.

Of course, I was wrong.

Not only have plenty of Asian Americans stood against hate but what I realized upon greater reflection, that I was not actually upset at how Asian Americans are standing up to hate. What was upset me was my approach to Jewish hate. I realized that we have always lived as a minority and expected the majority to come to our aid. Asian Americans seemed to apply an almost Kung Fu to fighting hate. They would fight the hate and it was up to all of us to be decent and join them.

There is little difference between the brazen attacks on Jews and Asians, online and in the streets. White alienated, entitled men are lashing out at Jews, Black, Latino, and Asians in deadly ways because life did not turn out according to their expectations. The difference between how Asian people responded to this hate and how Jews responded is that they demanded an end to it. They demanded that we all Americans join and end this hate. They made it visible, they made it clear that it is unacceptable and they gave only one possible action for any decent person: to stand up with them.

They did not ask for people to march with them, they simply marched. They did not ask for organizations to speak for them, they spoke. Their celebrities did not have to create flashy ads, they came to street protests and spoke. The Asian tiger was awakened and they showed that they are not meek, that they will not put up with these brazen attacks. They will not be ok with hate.

Compare this activism with how we the Jews have been fighting BDS, Jew-hatred, and anti-Zionism. We choose our words carefully. We try not to be too proud. We nuanced academic words created by nazis like “antisemitism” which doesn’t even have the word Jewish in it. We try not to upset the majority.

When an attack occurs, most Jews are not posting “end Jew-hate” on their Instagram. We take the hate half-expecting it. We have a view of the world that it is full of antisemites and that they are evil and we will show the world that they are evil and we think that those antisemites will realize that to be mean to Jews is bad and will change. We think if we just show these attacks that the world will care and when these attacks don’t make it on TV, we feel that the world is set out against us. Some of us maybe think that because 6 million of us died 80 years ago that the world feels accountable to us and that if we show that Jew-hate still occurs the world will jump into action and stop it.

We seem to think that our words “Never Again” are a motto for the world, misunderstanding that “never again” doesn’t mean that genocide will never occur. Never again actually means that we Jews will build Israel and will never again allow ourselves to be the targets of genocide.

But that’s not how the world works and Asian Americans’ response to the hate showed that. They reminded me that the world gives only that which you demand. The world doe not care about you, it cares about itself and it will respect you only if you stand up for yourself and demand respect.

Asian Americans showed me that when they demand that this Asian hate not be tolerated, the world will act and respond. This upset me because I was not outspoken, I did not demand an end to antisemitism, I did not demand action. I merely talked about it happening and was upset that no one took action.

Asian Americans who stood up to this ugly violent racism showed me not just how to fight hate, but also my own shortcomings when it comes to facing hate. So we can be angry and complain that the Stop Asian Hate slogan took off, or we can emulate and demand that Jew Hate must stop as well.