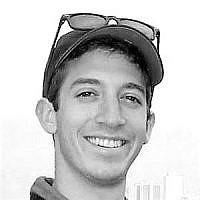 The Blogs
Michael Lewis
Apply for a Blog
Please note that the posts on The Blogs are contributed by third parties. The opinions, facts and any media content in them are presented solely by the authors, and neither The Times of Israel nor its partners assume any responsibility for them. Please contact us in case of abuse. In case of abuse,
Report this post.

In August of 2016, just before Tisha B’Av, the Chief Rabbi of Israel said that, “Reform and Conservative Jews are responsible for the assimilation of American Jews.”

In the narrative espoused by the Chief Rabbinate and parts of the government of our Jewish State, they assume that assimilation is the result of increased interaction with the lecherous American culture surrounding the Jews in exile. American Jews, especially Secular, Reform, and Conservative Jews, who spend time deeply integrated into American life, are the most significant threat to the Jewish people because we allow and even promote assimilation to challenge our Jewishness. And that dirty word, assimilation, is, in their way of thinking, the ultimate threat. We are the weak link in the chain of the Jewish story, first and foremost because of assimilation.

As a future Jewish community leader, this is especially difficult for me to hear as significant aspects of my work will be ensuring that American Jews do not fully assimilate into secular, non-Jewish life.

Yet, what these individuals and institutions fail to understand is that balancing assimilation and developing a Jewish identity properly is, in fact, the key to our Jewish story. Our Nation, our religion, our language and our people are marked by literature and ideas drawn from other cultures that have surrounded us. Yes, I would argue, the Jewish people have survived for 3,000-plus years because of our ability to balance assimilation with maintaining our own identity, not despite it.

In this week’s Parsha, Tetzaveh, we read the second parasha in a row detailing the construction of the Mishkan. But where, exactly, did this idea come from? In the entire book of Genesis and the beginning of Exodus, our Torah tells a story of a nation radically different than any other. In the most prominent example, our forefathers leave behind praying to statues of gods for rain and fertility and turn to a mysterious, unknowable, incorporeal Eternal with an unspeakable four-letter name. The beginning of our Torah creates a radical new vision for the world, separated from the idolatry that characterized the old.

And then, suddenly, we find ourselves with a section of Torah that appears to be the exact opposite of the ideal outlined by Genesis and the start of Exodus. We have extraordinary and intricate details relating to the construction of the Mishkan, a specific dwelling place for this supposedly eternal and incorporeal God.

The medieval Spanish commentator, Soforno, argues that HaShem and Moses had intended for God to reside all over the world and for the Israelites to have “direct access to the Shechinah, without the need for an intermediary,” (Soforno, Leviticus 11:2) He argues that the events of the Torah were actually out of order, and the sin of the Golden Calf, which we read the week after Teztaveh, was in fact, chronologically before the details for the construction of the Mishkan. In the eyes of the Soforno, Moses and God, upon witnessing the sin of the Golden Calf, realized that the people were not ready for the abstract, fully disembodied monotheistic revolution started by their ancestor Abraham.

To survive the radical shift that belief in the Eternal required, the Jewish people needed to adopt some of the cultic practices they were familiar with from the cultures around them. In other words, Moses realized that the Jewish people needed to balance assimilation with some of the cultural and religious expressions that spoke their language and addressed their needs. The Mishkan provided the perfect example of that balance – the text outlines detailed instructions for the cult service dedicated to this revolutionary, monotheistic God, but incorporating ideas and details in the ritual practice from surrounding cultures.

And the Mishkan is just the beginning. There have been countless other crucial moments where we have adopted ideas of the cultures surrounding us in the struggle with our weighted task of belief in a mysterious, omnipresent, Eternal God. As part of our “assimilation,” we built a Canaanite-style Temple, and when it was destroyed, a Second Temple that was eventually marked by Greco-Roman features. Our own language has been fundamentally altered by other languages: from the Persian Pardes to the Greek Afikomen and the English Televizia in modern Hebrew, the spoken language of the Jewish people has picked up words, structures and ideas from different cultures over the centuries. And just as our cultic practice and language were impacted by others, our ideas have surely depended on the ideas of other cultures as well.

Unlike our friends in the Rabbinate today, Ahad Ha-Am calls this concept “competitive imitation.” Jewish philosophy, historically, was marked by a conscious effort to imitate and adopt ideas from the society around us into the Jewish schematic. In order to succeed in competitive imitation, one must have a certain level of interaction with a dominant, non-Jewish culture. The Jewish community must be partially integrated and assimilated into a larger society to fully understand it.

In a commencement address at Hebrew College in 1966, Gerson Cohen, the Chancellor at JTS, expanded this even further. With the development of the modern ideas of freedom and equality placed in the context of increased tolerance for Jews, he spoke instead of a “healthy appropriation of new forms and ideas for the sake of growth and enrichment.” In fact, he argued, “Assimilation properly channeled and exploited can become a blessing… Assimilation is a not a one-way street: very much like the Torah itself, it is capable of paralyzing or of energizing, depending upon how we react to it.”

Which brings me to the final point – assimilation is not just a project of the 20th and 21st Century American Jewish diaspora. In fact, one of the most recent, significant forms of assimilating and connecting to the ideas of a surrounding culture happened as a result of emancipation in 18th Century Europe. With sudden access to the cultures around us, we found ourselves sharing in the national ideals of our European counterparts. In this era, democratic forms of government and sovereignty were replacing the autocratic monarchies of old. Zionism, and eventually the State of Israel, was the result of the collision of Judaism with these modern, European ideas.

Yes, modern Nation-States have struggled mightily with solving issues of minority rights and freedom and equality for all in the context of a State based on a common language and a unique culture – the Jewish State is not unique in facing similar challenges. But as we “tackle” assimilation head-on, by striving to find a proper balance between maintaining our own Jewish identity and assimilation, we must remember that Zionism is part of that story.

Just as the Mishkan, and later the First and Second Temples, were predicated on the cultures around them, Jewish sovereignty and independence rooted in modernity and a European ideal is a necessary part of our Jewish story. We can try to run away from Israel, its struggles and its intellectual challenges. But in doing so, we are running away from the world around us like the Rabbinate tries to run away from Reform and Conservative Jews. Just as we have the choice to be energized or paralyzed by assimilation in the United States, we have the same choice when it comes to the State of Israel.

About the Author
Michael Lewis is a Rabbinical Student at Hebrew Union College-Jewish Institute of Religion. Before starting Rabbinical School, Michael worked in Washington, D.C. for various campaigns. He is an alumnus of Tulane University, where he served as Student Body President.
Related Topics
Related Posts
Comments