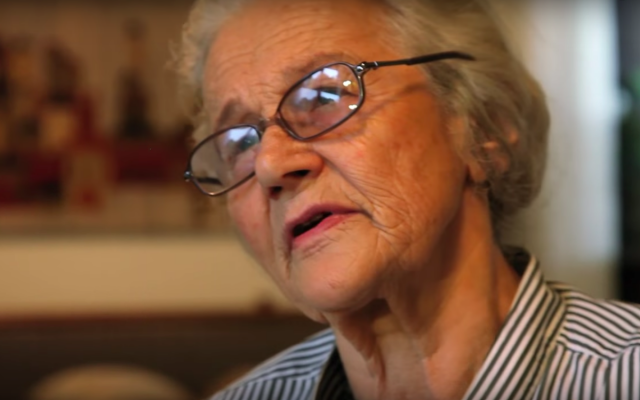 I think that it’s quite certain that while she was incarcerated in the Stutthof concentration camp near Gdansk, suffering from typhus, Halina Strnad never imagined that one day 76 years later, she would be sitting in Melbourne, Australia, and testifying via video against one of the guards in that camp, on trial in Hamburg. Yet 75 years and one day after the liberation of Auschwitz, an event marked with great solemnity in many countries throughout the world, that is precisely how she symbolically marked that anniversary.

Bruno Dey, a 93-year old German, is currently on trial for accessory to murder at the Hamburg district court. He served as a guard in Stutthof toward the end of the war, during the period that Halina and her mother were incarcerated there. Most of the time, his assignment was to man one of the camp’s watchtowers. His trial is the fifth of those mounted following a dramatic change in German prosecution policy, whereby anyone who served in a death camp and/or one with a gas chamber or a gas van can be convicted for accessory to murder, even if there is no evidence against them of having committed a specific crime against a specific victim motivated by racial hatred (which was the requirement for prosecution in Germany until about a decade ago).

Under these circumstances, survivors do not have to have witnessed the accused commit a crime, or even to be able to identify them. And in fact, one of the peculiarities of Halina’s testimony was that Judge Anne Meier-Goering never asked her if she recognized the defendant, a question which in previous Nazi trials was of critical importance and was almost always the most dramatic moment in the proceedings. Yet even without this element, Halina Strnad’s testimony was incredibly powerful, and clearly moved the judge, as well as the journalists and spectators in the courtroom.

Halina was originally incarcerated together with her family in the Lodz ghetto for 3.5 years. She and her parents were among the last Jews deported to Auschwitz. For reasons she did not explain, probably because of overcrowding at the death camp, she and her mother were sent by cattle car to Stutthof, arriving there in September 1944.

Halina described her life in Stutthof in graphic detail. The conditions in the camp were terrible. There were no bunks in the barracks, only some straw to lie on. The female guards harshly mistreated the inmates, beating them indiscriminately, spitting at them, and calling them “pigs” and Untermenschen (sub-humans), and Strnad’s skull was fractured during one of those beatings. To make matters worse, there were virtually no hygienic facilities and no showers. A latrine outside the barracks, which was merely a pit, was dangerously slippery.

In the midst of all this suffering, a woman who had recently arrived in the camp gave birth to a dead fetus. The inmates had to break a window to get a piece of glass to cut the umbilical cord, and Halina had to drown the baby’s body in the latrine. A few days later, she saw the fetus floating on the water, and had nightmares about the incident for many years later.

Another traumatic incident was her mother’s death of typhus in the winter of 1944-45. Both she and her mother fell ill and were unconscious, but Halina somehow survived and did everything she could to save her mother. She begged her to hold on, but ultimately she died in Halina’s arms. (Only 20-25 inmates out of hundreds survived the epidemic.) Later she was taken on a death march, and ultimately survived when she fell behind and hid in an abandoned railroad shack, with two other female inmates of the camp. Found by a local German who hid them for several weeks, they managed to survive.

If anyone needed any proof of the incredible importance of survivor testimony, even at this late date, Halina Strnad’s extremely lucid, graphic descriptions of the conditions in Stutthof are a clear example of their value. In this case, the irony is that both the survivor and the suspect are the same age, and each appears to be in relatively good health, reinforcing the validity of the prosecution of suspected Nazi war criminals, even when they reach this age.