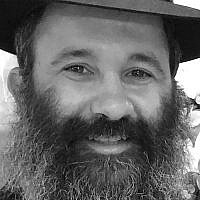 The Blogs
Peretz Chein
Apply for a Blog
Advertisement
Please note that the posts on The Blogs are contributed by third parties. The opinions, facts and any media content in them are presented solely by the authors, and neither The Times of Israel nor its partners assume any responsibility for them. Please contact us in case of abuse. In case of abuse,
Report this post.

The world of podcasts is cluttered like my grandmother’s basement. Practically every item she comes across is stored there, from hair pins, to floppy disks, to vacuum cleaners. In the same way every idea, in any area, exists in the “basement” of podcasts. Nonetheless I noticed a void, if only in my small orbit of life, for a new podcast. One that provides authentic and deep conversations with individuals from all walks of Jewish life. After craving such public discourses for the longest of times I’ve decided to create a space for them to occur. For now, it’s called Podcast with Peretz.

To provide an environment for honest talk the guests will be anonymous and have their voices altered if they prefer. They won’t be concerned with how others judge or view them and therefore won’t withhold or manipulate themselves to appear acceptable to others. Which often is the case in our conversations with others and what we share on social media.

My first guest is a first-year at Brandeis. He shared how, “[At Brandeis] there isn’t enough conversations going on about things that matter… [and] the only time that there was serious conversation was when people were discussing their mental health..their anxiety or depression.” While he acknowledges that it’s amazing that these conversations are no longer stigmatized, coming to college he was seeking additional substantive conversations. Ones ranging from Jewish identity, Zionism, to broader issues of politics, philosophy, and matters relating to the larger world. Though he admits that there are certainly individuals who engage in these conversation, as a whole, it does not exist in the campus culture.

Then we went on to discuss his abandonment of the Orthodox lifestyle he grew up with and how he rediscovered his Jewish identity and pride during his year in Israel prior to coming to college. At the end, I challenged him to explain why his Jewish identity cannot be replaced by either his American or human identity?

For a moment I’d like to reflect on the the lack of substantive conversations amongst students. This is a phenomenon that Chanie and I have observed and having it confirmed by a student made it all the more astounding and troubling. Troubling because growth and maturation occurs only through these types of encounters and when they do not occur amongst students in college, really the only time in one’s life when one has the freedom of time and mind to engage in this opportunity to grow, then our future is in peril.

In part two our conversation continues and my guest asks me to explain my take on this phenomenon and challenges me to tell him what I am doing about it. Stay tuned.

In the meantime you can listen to part one of our conversation here.

About the Author
Rabbi Peretz Chein is co-founder of the Chabad House at Brandeis, established in 2001. Born in Israel to Russian immigrant parents, Peretz also founded iLearn, an educational program attended by upwards of 100 students. Ran numerous marathons, inspiring students and alumni to join him. Founded a tech-startup that addresses the needs of event organizers, and was recognized for his organization's fiscal transparency.
Related Topics
Related Posts
Comments