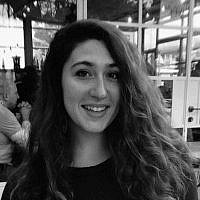 The Blogs
Raizel Direnfeld-O'Brien
Mental Health Education Specialist
Apply for a Blog
Advertisement
Please note that the posts on The Blogs are contributed by third parties. The opinions, facts and any media content in them are presented solely by the authors, and neither The Times of Israel nor its partners assume any responsibility for them. Please contact us in case of abuse. In case of abuse,
Report this post.

This article will be discussing the topic of suicide. If you are struggling with thoughts of suicide please call a hotline. Israel: ERAN 1201. A list of suicide and crisis lines around the world can be found on this page.

Nearly seven years ago, I was giving a suicide prevention workshop at a middle school outside of my hometown, Portland, Oregon. I almost never spoke about suicide to such young students because statistically those under 14 years of age rarely struggle with suicide attempts. However, this middle school had experienced three suicides in the previous six months.

As I walked up to the health class doors to begin my lesson, the regular teacher pulled me aside. Thinking she was doing me a favor she began warning me about a student, let’s call him Ben. “That kid over there is Ben. He is just a terrible student, totally helpless. If he can be disruptive he will. He will try to take the attention from the class. More than a class clown, he is just the worst, always seeking attention. He makes my job so hard, I will keep him in the back with me so he doesn’t bother you. I just want to apologize in advance.” I replied, “No thank you, he can join the class as usual. I am sure it will be okay.”

Sure enough, as soon as I started my workshop, he started with his jokes. Using all of the engaging educational strategies in my arsenal, along with a few sassy comebacks to match his energy, Ben soon became one of the most interactive and serious students in that workshop.

After my lesson when all of the students had left for lunch, he asked me if he could talk to me privately. Glancing back to make sure his regular teacher, who had so long ago branded him as disruptive and helpless, was out of the room. With tears in his eyes, juxtaposing his mask of bravado I saw in class, this 12 year old told me about his life. “My mom has to work two jobs so I end up taking care of my sibling, and I don’t mind. I am just so scared of letting her down. And my girlfriend…” his eyes were glued to the floor, hands fidgeting and he was clearly fighting back a sob. “My girlfriend yells at me so much. She makes me feel so bad. I want to break up with her. But she told me she will kill herself if I leave her. I am so tired. Everyone is depending on me, what if I let them down and it is all my fault. What if someone dies and it’s all my fault.”

My heart broke for this child. He had so much on his shoulders. Not knowing how to let go of the protective wall around himself that made everyone think he was strong, he called out for attention. He wanted someone to pay attention to how much he was hurting. He needed someone to see that his actions were really his begging for help. But, when it came to the people who should be there to support him, in this case his teacher, he was blown off as merely someone seeking attention. He was waved away as ungrateful, unimportant and annoying.

We need to pivot away from the stigma that attention seeking behaviors are inherently bad.

Last month, Tikva Saban called the police as a last attempt to get help for her thoughts of suicide. She called over 25 times. She was begging for attention, asking to be helped to a hospital. And instead of getting an empathetic civil servant on the other end of the phone line, she was told “You’re an idiot who wants to kill herself, so kill yourself quietly already. Go and kill yourself without telling us anything. We’re on our way to you, you idiot. Stay there.” She sadly followed this advice, and took her own life.

One of the most dangerous stigmas we can hold against a person experiencing a mental health crisis is that they are “merely seeking attention.” People say this with a wave of a hand and a roll of their eyes. But if we paused for a second and realized what attention seeking behaviors are, we can get back to our innate empathic abilities.

I want you to replace the word ‘attention’ with the word ‘help.’

For example: “That kid over there is Ben. He is just a terrible student, totally helpless. If he can be disruptive he will. He will try to take the help from the class. More than a class clown, he is just the worst, always seeking help. He makes my job so hard, I will keep him in the back with me so he doesn’t bother you. I just want to apologize in advance.”

All of a sudden, it becomes clear that Ben was a hurting kid; a child in crisis. He didn’t have the tools within himself to be able to clearly ask for help. More importantly, the teacher didn’t have the skill set to recognize that this child did not know how to accept help from her either. Thankfully, the non-profit I was working for at the time was able to connect Ben to long term resources and get him the help he craved.

When people call out for attention, they are hoping that someone will pay attention to their pain. Not knowing how else to communicate their pain, an individual may cry out for help repeatedly. Even when many people try to help, the type of support offered may not resonate with the person in need. Confused by why the assistance offered is not working, similar behaviors may persist as they continue seeking help.

For support people in the community, the cycle of: offering help, not having the help taken, and being met with repeated similar help seeking behaviors can be highly frustrating.

When I was working at the National Youth Suicide Crisis Hotline in America, I had a few similar types of cyclical cases. I would become extremely frustrated by the clash between me wanting to help someone and the help not being adequate which then prompted the caller to constantly reach out with the same story. In this type of situation, the protocol is to transfer the call to another operator who can maintain empathy.

“They made me out to be such a bad and unhinged person. For 29 years I have been serving this system…I saved a lot of people who tried to kill themselves…But this woman was being a nuisance.” The police officer’s statement shows that he was in an extreme state of frustration. Extreme states of frustration can shut down our empathy response.

Instead of seeing Tikva Saban’s behaviors as help seeking, he returned to the stigma associated with attention seeking behaviors: ungrateful, unimportant, and annoying. The police officer could no longer display the empathy and patience required as an emergency responder. He should have stepped away from the phone call and given Tikva to another operator who could respond to her in a helpful way.

In the same way that Tikva deserved help, the officer also deserved to have an established protocol which would prompt him to step away when calls were too much.

When in a position to respond to help seeking behaviors, it is important that you stay connected to your own needs for self-care so you can show empathy for others. If the conversation heads towards extreme frustration and you can no longer support those in need, step away. Before stepping away, direct the person in need to other support people they can lean on or give a number to a crisis hotline. Tell them that they deserve love, empathy, and support – even if it can’t come from you right now.

This tragedy should have never happened. To prevent it from happening again we need to change.

Ask yourself if you hold the stigma that ‘attention seekers’ are ungrateful, unimportant and annoying. Change the script and replace ‘attention seeking’ with ‘help seeking.’ If you are heading towards a highly frustrated state while trying to give support, step away and refer the person in need to those who can respond with empathy and patience.

May the memory of Tivka Saban be a blessing.

About the Author
Raizel Direnfeld-O’Brien, originally from Portland, Oregon, is a mental health education specialist. Raizel began her work in the mental health field as a suicide and crisis hotline operator and transitioned into the education field teaching social and emotional health to middle school, high school, and college students. She is passionate that education is one of the most powerful forms of mental health care! Through student focused interactive workshops and courses, on social media @mentalhealthedu.israel, and other educational outlets, Raizel aims to empower people with practical strategies and tools to take care of their mental health, both day-to-day and at challenging times in their lives.
Related Topics
Related Posts
Comments