Yet as I visited the Nazis’ most infamous camp along with 11,000 others – including 260 Brits – for March of the Living, I heard singing and saw dancing.

There was one thing I was acutely aware of at Auschwitz, as people celebrated.

Despite being surrounded by artifacts of history, I didn’t feel sombre. I wasn’t thinking about the victims of the Holocaust.

Young people from around the world asked to swap badges and hats with me, as if this was some kind of fete.

There was almost a carnival atmosphere.

Then the shofar pierced the noise and silence finally fell as 11,000 people prepared to walk from Auschwitz to Birkenau. 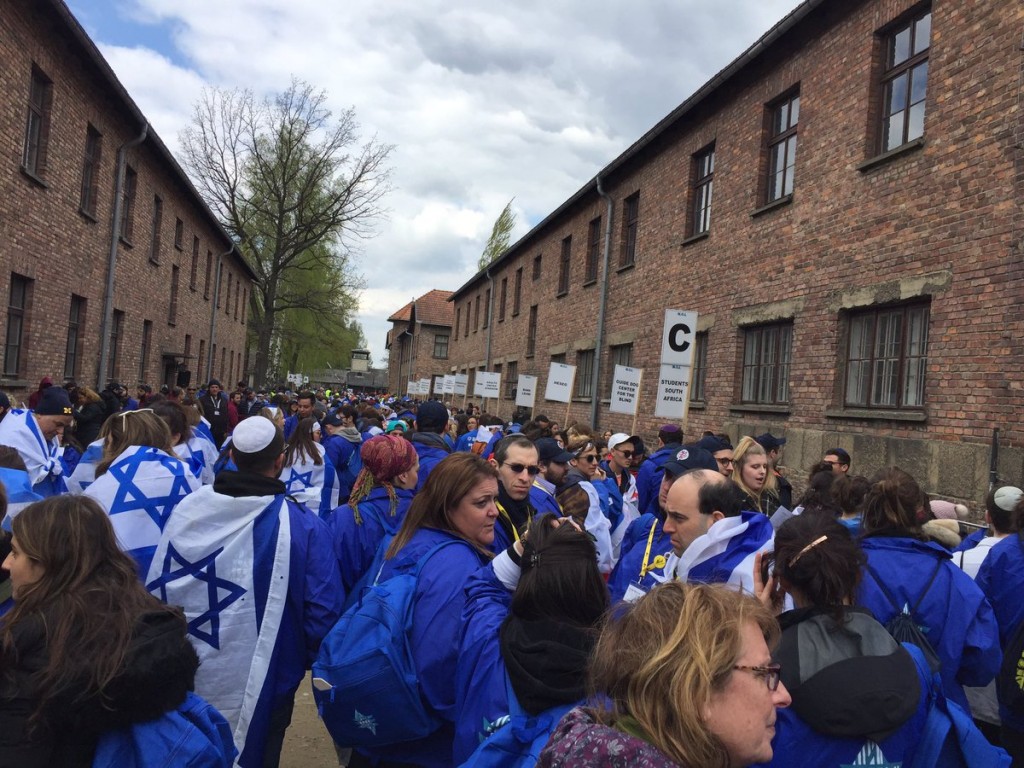 Participants on March of the Living at Auschwitz

Yet still people sang. The vast majority were hushed, but some had no time for silence.

I didn’t know the appropriate response to these sights and sounds. So I asked someone whose opinion matters most. A survivor.

Mala Tribich was deported to both Ravensbrück and Bergen-Belsen concentration camps.

Mala, 87, told me: “It’s absolutely not appropriate and something that I feel very strongly about.”

She added: “The English groups don’t tend to sing and dance. It’s the Americans and Israelis. It is so wrong, because we are at a cemetery. We’re thinking of all the people who died here. To have this attitude that we survived and now we’re here, it’s all very well, but I don’t think people should sing and dance about it.”

I posted a video of the singing at Auschwitz on Twitter, asking if it was OK.

Auschwitz 1 right now. Kind of confusing emotions. No sombreness in the heart of a death camp. Little uncomfortable#marchoftheliving #motl pic.twitter.com/iIP292U5NF

I got a mixed response:

“Youth movements have a long standing history of acts of defiance in the Holocaust. It is important to show our values have not been crushed”.

“Two years ago I stood there singing. No better expression of vibrant Jewish life in the shadow of the Shoah than to bring our joy and life!”

Perhaps one can’t blame those who choose to celebrate in a concentration camp. The event is called March of the Living, after all. A celebration of life.

I also spoke with Harry (born Chaim) Olmer, a sprightly and energetic 89-year old survivor. He had been deported to Kraków-Płaszów and Buchenwald concentration camps. He said: “I think singing is the right thing to do. We’re alive. There is nothing wrong with being happy about that in a place like this.”

With survivors giving me opposite answers, I continued to plough through Twitter.

One person said there was “no excuse to turn the event into a three-ring circus”. Another said it “shows the Jewish spirit is alive in a powerful act of defiance against hatred.”

On reflection, I’ve now made my mind up.

While March of the Living is a celebration of life, having a party in a place of unimaginable death steps over the line.

It makes you lose perspective of where you are and why you’re there.

It banishes the sincerity required to process what took place.