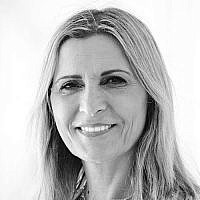 The Blogs
Rozita Pnini
Apply for a Blog
Advertisement
Please note that the posts on The Blogs are contributed by third parties. The opinions, facts and any media content in them are presented solely by the authors, and neither The Times of Israel nor its partners assume any responsibility for them. Please contact us in case of abuse. In case of abuse,
Report this post.

Like a mutating virus, anti-Semitism continues to raise its ugly head in the United States.

This virulent form of prejudice has infected the world for many centuries, culminating in the worst genocide in human history. Today, this virus is resurgent, and responsible governments should seek to stamp it out – just as they would in response to a viral pandemic – because innocent people die in both cases.

The rise of anti-Semitism in the U.S. exposes the distressing fact that the American Jewish community lacks both a unified leadership and a singular voice with which it can respond appropriately.

There are some who assign responsibility for the rise of this hatred to President Trump. Some within the Jewish community have even criticized his December, 2019 executive order against anti-Semitism on college campuses. Criticism of such an order is indicative of the depth of division that exists within the Jewish community. Where we need unity, we find only division.

The American Jewish community has always suffered from a lack of a national leadership. In New York alone, the Ashkenazi, Syrian, Persian and Israeli-American communities have their own leaders, and they are far from being truly unified.

The fact is that anti-Semitism in America cannot be blamed on any one administration. Anti-Jewish prejudice has existed for millennia and the rise of that hatred runs parallel to the broader divisions in American society.

At the organizational level, multiple groups work separately on their own initiatives to fight anti-Semitism, but still no united front has emerged.

That’s why I believe the time has come for changes at the grassroots level. Members of the Jewish community should pressure their leaders to come together and form one, clear, united voice. Nobody should assume that organizational leaders have the ability to take matters in hand. The evidence clearly suggests otherwise.

The Me Too movement became hugely effective when celebrities used their voice to stand together and say that men who engage in sexual aggression must face punishment. Jews in America also need a single, clear voice in these times.

Unfortunately, the lack of cohesion among community organizations has exhausted and alienated many grassroots, Jewish activists, but if the right leadership were to emerge, those activists would return to the battle for the Jewish future.

To a degree, the polarization of Israeli society further complicates the quest for Jewish unity in the United States. After three rounds of elections that spanned an entire year, there remains no clear Israeli figurehead to whom the diaspora can look for a policy to combat anti-Semitism.

Although there have been many attempts to build a single, national leadership that can represent Jews to local and federal governments, none have proven successful thus far.

Relying upon local government to send police officers to guard Jewish sites is not a sufficient response in light of the scope of the threat. Closing our eyes and hoping that others will solve the problem for us is not a working strategy.

One of the first steps that a unified leadership must take is to raise the necessary funds to place private armed security guards at every synagogue, Jewish community center, and Kosher restaurant in America. Doing so would decrease the vulnerability of such potential targets considerably. The unarmed guards currently deployed around Jewish facilities will prove ineffective in the face of armed attackers.

In addition, Jewish leaders need to be able to call out anti-Semitism wherever it appears, whether it masquerades as ‘mere’ anti-Zionism, or it presents itself in the actions of white supremacists.

Attempting to censor this discussion because of fears of ‘politicization’ is part of the problematic unwillingness to deal with the full scale of anti-Semitism.

The British Jewish community, and communities throughout Europe, though much smaller that their American counterpart, benefit from having a unified leadership that is able to speak with a common voice against anti-Jewish racism. American Jewry can learn from such examples. While in Europe, they possess the means of recognizing anti-semitism and the need for solidarity, they lack the means to be truly impactful at the governmental level. In America, regretfully, we have the means to be impactful, but we are often too slow to recognize the threat and too unwilling to act as one.

Though the coronavirus dominates the lives of all of us at this time; this pandemic will pass, and the ancient hatreds that once were, will rise anew. Nobody should underestimate what can transpire for the Jewish people in a country and a world that may well find itself in the grip of a sustained, severe economic downturn and social unrest; two hallmarks of what this pandemic may leave in its wake.

The situation is serious, and it requires serious community action. Continuing to act as we have done until now is no longer an option.

Though many new normals may come to pass post COVID-19, a world without anti-Semitism will not be one of them.

About the Author
Rozita Pnini is the Co-Founder and COO of The MirYam Institute (www.mirYaminstitute.org). She was born in Iran and moved to Israel with her parents and siblings as a young child. She served in the Nahal brigade of the IDF during the Lebanon War as part of her mandatory military service. Formerly the President of Our Soldiers Speak, Rozita regularly dispatched senior ranked, active officers of the IDF and the Israel National Police to brief elite graduate campuses throughout the english speaking world. She continues to convene Israel policy presentations for elected officials in the US and the United Kingdom. She is the proud mother of three daughters. Subscribe to her Hebrew Language podcast which features conversations with Israeli public figures via The MirYam Institute website. Follow her work at www.MirYamInstitute.Org .
Related Topics
Related Posts
Rozita Pnini
Comments