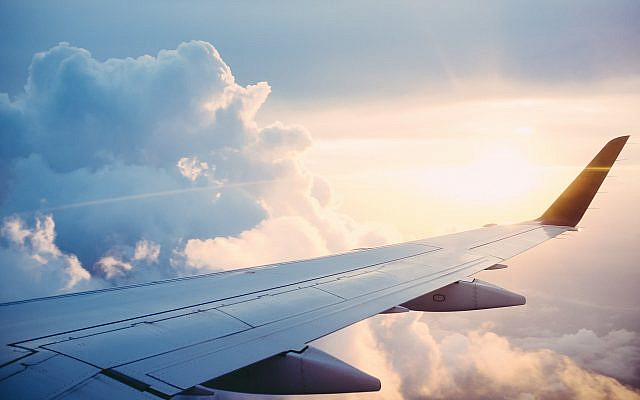 Photo by Ross Parmly on Unsplash

When our kids were teens, they traveled to Israel on programs that stopped first in Poland, bringing them face-to-face with the Shoah.

A week later, the teens boarded a plane for Israel.

When the plane landed at Ben Gurion, the kids descended the steps to the tarmac and kissed the ground.

It was not my kids’ first trip to Israel. But their exhilaration, jubilation, and overpowering sense gratitude upon landing in Israel was intensified by what they had just experienced.

It took me until age 41 to get to Israel for the first time, but once I got there, I was overcome with an immediate, visceral, primal sense of “home.” That feeling has only deepened with each visit. Nothing matches the days spent immersed in Hebrew, surrounded by Jewish history, faith, and culture, seeing our people’s great, collective endeavor alive and thriving. How I cherish the time spent with the loved ones who are our Israeli family and friends!

The precious days I spend in Israel each year replenish me. I return to Minnesota counting myself doubly blessed to have two places in the world that are home, a figure-eight I circle with a full and grateful heart.

Over the years, as each visit to Israel concluded, as the plane lifted off, as the last bit of the Israeli landscape faded from view, I would already be thinking about “next time.”

I never thought seriously about how something huge could disrupt that. Naturally, I assumed at some point, decades from now, I’d be too old and frail to travel. But until then? There would always be a “next time.”

In the midst of the COVID-19 pandemic, no one is going anywhere.

For the time being, Israel is closed to non-citizens. From Israel’s Ministry of Health:

“All foreign nationals are denied entry to Israel. In exceptional cases, one may apply for approval of the Foreign Ministry, subject to proof of the ability to remain in home isolation for 14 days upon arrival in Israel.”

Now we are in a moment when it is impossible to know when, exactly, “next time” will be.

That’s painful for those of us who long to visit Israel, but it’s devastating for Israel’s tourism industry, which employs around 145,000 people.

Samuel Green, an Israeli tour guide, compares the impact of the coronavirus shutdown to the downturns he has weathered due to security concerns: “But what the industry is experiencing now is much, much worse. Even during the Gaza wars; even during the Second Intifada, people still came. They did not come in large numbers, but they came.”

Green explains who is most impacted by the shuttering of tourism: “In areas such as the Galilee, Golan and Negev, where hi-tech jobs are less prevalent, tourism plays a much more important role in the local economies. Many of the people who work in tourism are at the weaker end of the economic scale.”

How long it will take to recover is anyone’s guess. Tourism is “an industry that they always say is the first to be hit but the last to revive,” said full-time tour guide, Alex Stein. His bookings for May have all cancelled, and he is bracing for the same in the following months.

Think of tourism’s vast infrastructure and the people who keep it running. Imagine the drivers whose buses sit empty. Picture the staff who keep hotels clean and running smoothly, lodgings now devoid of guests. Try to visualize the shops whose owners count on a steady stream of tourists eager to bring home gifts. Think of every restaurant, ice cream shop, hummus joint, and shawarma stand, depending on both Israelis and tourists to keep them in business.

Yuval Carmi, a falafel seller in Ashdod, has become a symbol of the financial devastation caused by the coronavirus crisis. In an interview that was featured on Israeli prime-time news and which brought the Israeli film crew to tears, a sobbing Carmi described how it feels to be a man who always prided himself on making an honest living and is now unable to provide for his family.  Meanwhile, hundreds of small business owners protested on Sunday outside the Knesset, demanding that the government do more to help them survive the lockdown.

What can we do from this side of the ocean to help? Perhaps some tech-savvy tour guides can sell virtual Israel tours to North American Jewish communal organizations looking for content while we are all sitting at home. Maybe groups hoping to visit Israel next year can put down a few (refundable) deposits now. Here’s my favorite: Pizza for the IDF, which delivers pizza, burgers, and other treats to IDF soldiers on duty. Supporting restaurant owners and soldiers, it’s a great two-for-one. I can’t do much to alleviate the devastation, but I can do this.

And, I can pray that the pandemic and its staggering loss of lives and livelihoods will end, soon. That some form of normal life will resume, so people everywhere can return to work and school, beginning the long road to mental, emotional, and financial recovery.

I can pray for the day when Israel will be able to reopen her borders to non-citizens, when it will be safe enough to travel halfway around the world, and people will feel secure doing so.

And when, God willing, that time arrives, and I’m blessed to travel once again to Israel, I’ll board the plane with gratitude beyond measure.

I’ll pull out my well-worn copy of  “Tefillat HaDerech” (the Traveler’s Prayer) and read it over and over before the plane takes off.

And when the plane finally touches down in Eretz Yisrael, after so much uncertainty and fear and worry and isolation…..when the door of the aircraft opens and a planeload of us arrives, at long last, in our beloved Israel?

I’ll kneel and kiss the ground. And I imagine others will too.

About the Author
Sally Abrams co-directs the Speakers Bureau of the Jewish Community Relations Council of Minnesota and the Dakotas. She has presented the program “Israel and the Middle East: the Challenge of Peace” at hundreds of churches, schools and civic groups throughout the Twin Cities and beyond. A resident of suburban Minneapolis, Sally speaks fluent Hebrew, is wild about the recipes of Yotam Ottolenghi, the music of Idan Raichel, and is always planning her next trip to Israel. Visit: sallygabrams.com
Related Topics
Related Posts
Comments