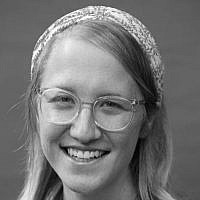 The Blogs
Emily Winer
Apply for a Blog
Please note that the posts on The Blogs are contributed by third parties. The opinions, facts and any media content in them are presented solely by the authors, and neither The Times of Israel nor its partners assume any responsibility for them. Please contact us in case of abuse. In case of abuse,
Report this post.

I find this verse from Parshat Shemini striking for several reasons. Aside from the fact that everyone was gathered together without masks, they gathered together for a seemingly common activity: observing the sacrifice of korbanot. Perhaps it was the communal sense of awe from Bnei Israel as they watched their korban become entirely ablaze, consumed by God in a fiery glory. Their awe was captured by the phrase “וַֽיִּפְּל֖וּ עַל־פְּנֵיהֶֽם”, or literally, they fell onto their faces.

I stopped at this pasuk, not because I could imagine myself experiencing korbanot in such a way, but because I yearn to feel a sense of awe from an all-consuming fire.

The last time we as a collective experienced a communal falling on our faces from awe was just one year ago, as thousands of people were plagued with COVID-19. We know the feeling of falling in fear as frontline workers worked tirelessly and held witness to what was, in a way, an all-consuming pandemic.

It has become difficult to reimagine a communal sense of awe from God’s closeness rather than God’s mysterious hiddenness.

It makes sense then, that after watching their father Aharon conduct the entire process of sacrificing korbanot on the mizbeach, sons Nadav and Avihu also wanted to experience the communal awe. They instantly spring into action in the next pasuk:

The commentators jump at the opportunity to explain or perhaps justify this tragedy. Rashi cites Rabbi Ishmael who states that Nadav and Avihu were drunk. Ramban emphasizes that they brought a “strange fire” before God, one that was not commanded of them. The Chizkuni boldly suggests that they were arrogant, purposely trying to circumvent the kavod for God. It is a midrash, however, that offers this compelling interpretation:

“After the death of Aaron’s two sons.” It was taught in a baraita in the name of R. Eliezer…. Nadav and Abihu died only because they had taught halakhah in the presence of their master, Moses….” מדרש תנחומא, אחרי מות ו׳:א’

In this midrash, Nadav and Avihu were killed for lacking kivod ha’rav, the humility in the presence of their teacher. They taught halakha, or proposed a different approach to closeness with God, in front of Moshe and Aharon with a kind of chutzpah that ideally dissipates with time and age. I want to suggest that Nadav and Avihu were consumed by their own fervor to “ וַיַּקְרִ֜בוּ לִפְנֵ֤י ה”, make themselves close to God. They were intoxicated by the very fire that consumed them, a fiery desire to be like Aharon and Moshe. ָIt is Aharon’s silence — his דומה (dumah) — that confirms his awe for his children, who are דומה (similar) to him.

This read of Nadav and Avihu is admittedly quite generous. It requires imaginative thinking and flexibility from commentaries left and right. But if we just switched the emphasis from something that riled up their neshamas to something that intensified that all-consuming fire, then we have to ask: what was so powerful in that moment that made Aharon’s sons strive to mimic it themselves? Beyond the blazing magnificence, what was so unique about the roaring flames of HaKadosh Baruch Hu that compelled Nadav and Avihu to make such an impulsive error?

Rabbi Yedidiah Tiah Weil, an eighteenth-century scholar and leading rabbi in Carlsruhe, Germany, hones in on the power of the kiruv (closeness) to God. When he anonymously authored the Marbeh L’isaper, a commentary on the Haggadah, he illustrated God giving the Torah on Mount Sinai as a moment that we can apply here to the korbanot process of Moshe and Aharon.  He writes,  “What was so significant about being brought close to Mount Sinai? All of their injuries and illnesses were healed when they came to Mount Sinai. Also, 600,000 angels descended at Mount Sinai and crowned each of the Israelites with two crowns, and placed the dew of resurrection upon them. At the moment that Israel declared ‘we will do and we will listen’ there was not a single leper, nor was anyone afflicted with any other illness or disability. Vayikra Rabbah18:4 At that hour, God said, “Every part of you is fair, my darling; there is no blemish in you.”

To see God as a blazing fire consume your offering is to be reunited with God at the bottom of Har Sinai.

To successfully offer a korban is to be healed and free of all blemishes and pain. We do not know what kinds of internal blemishes or defects were hurting Nadav and Avihu, but their desire to emulate Aharon, their Cohen-and-father gadol, stirred in them the desire to have their own Sinai experiences with their own resurrection crowns. While Nadav and Avihu were intoxicated in their zeal for growing close to God (and maybe with some alcohol, too), their error was running rather than falling to their faces in awe, like the rest of B’nai Israel had done. Our manifestation of awe is when our knees and faces touch the ground. Without that precious pause to soak in kedusha, we are at risk of being like Nadav and Avihu and becoming consumed by the fire rather than its light.  May our nefilah (falling) be our tefillah. And may we, too, have that universal healing moment that took place at Har Sinai.

About the Author
Emily Goldberg Winer loves community building and sharing Torah with people from all walks of life and across generations. She has served as an intern at Congregation Beth Sholom in Potomac, Maryland, Columbia/Barnard Hillel, visiting chaplain at Bedford Hills Correctional Facility, community educator at Brandeis, and teen coordinator at the Hebrew Home of Riverdale. She has participated in numerous fellowships including the Jewish Innovation Fellowship , the Join for Justice Fellowship, the rabbinic student fellowship at Shalom Hartman Institute, and is a Wexner Graduate Fellow. Emily is a graduate of Muhlenberg College with degrees in Religion and Jewish Studies.
Related Topics
Related Posts
Comments