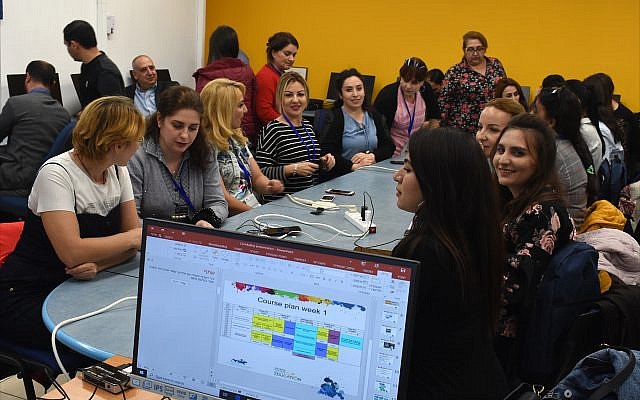 Israel imports 40% of its oil and gas needs from Azerbaijan, while the Caucasus republic spends $100 million or more on Israeli weapons, tanks and other defense equipment every year.

But the bilateral relationship is about more than gas, guns and the two countries’ shared fear of Iran. It’s also about educating youth for the future.

Thanks to an ambitious venture between Azerbaijan’s Ministry of Education and the nonprofit organization ORT Israel, 100 teachers from the former Soviet republic visited Tel Aviv in 2019 to learn the latest techniques in science and technology education — and apply those techniques in their classrooms back home.

Education is especially important for this predominantly Shiite Muslim nation of 10 million, whose offshore petroleum reserves are expected to run dry by 2045. 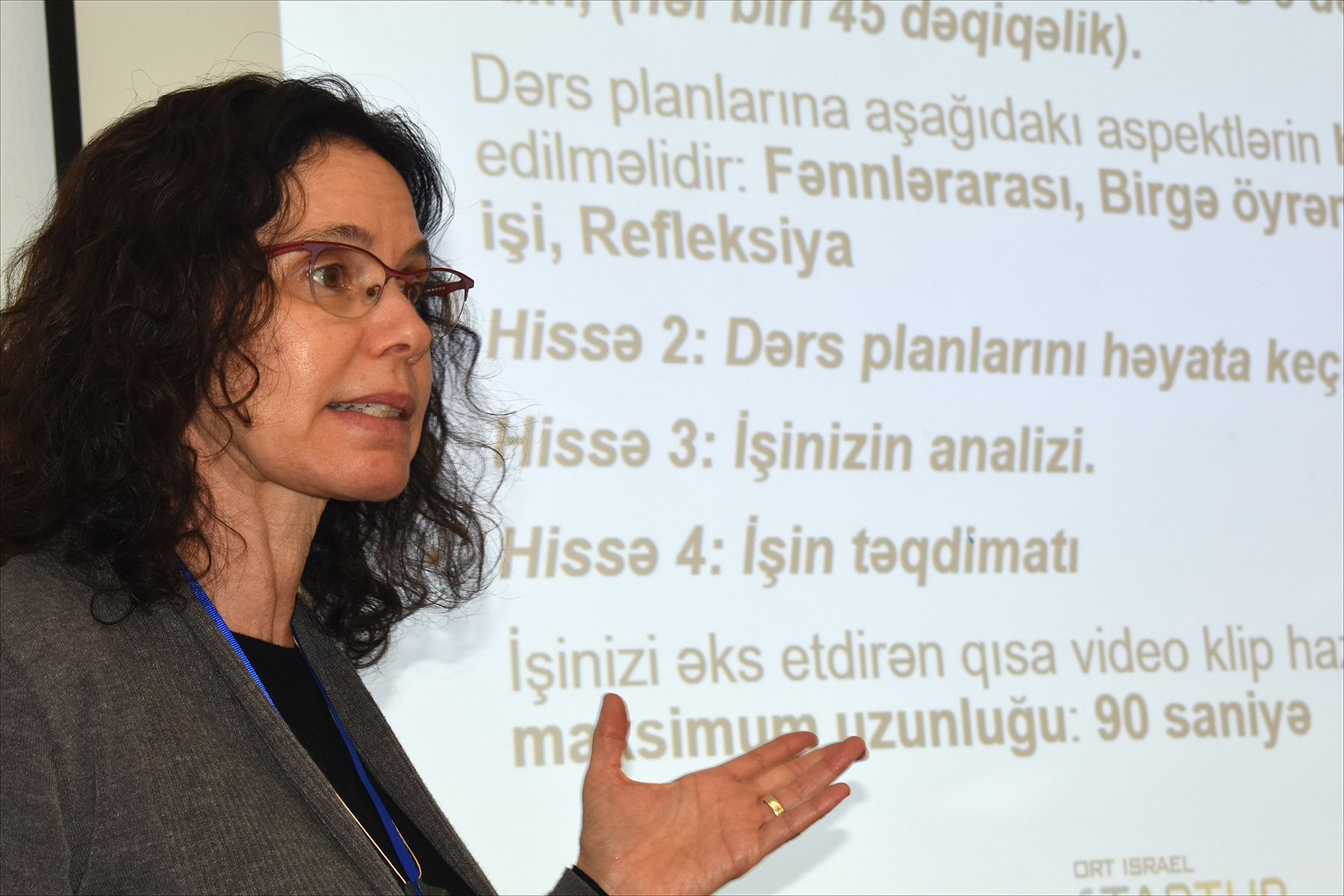 Bordered by Russia, Georgia, Armenia, Iran and the Caspian Sea, Azerbaijan — roughly four times the size of Israel — is struggling with worsening unemployment and poverty. About 60% of the state budget comes from oil revenues, yet annual per-capita income has steadily dropped, from around $7,900 in 2014 to just under $4,600 last year.

“Oil and gas don’t create jobs, and they don’t develop people,” private consultant Arthur Lenk told me on Monday. “Azerbaijan cannot just depend on what’s under the Caspian. They’re saying, ‘give us the tools outside of the energy sector so we can be creative and innovative.’ Israel’s wealth is not oil or gas because we don’t have any. It’s our people.”

Following his departure from the Israeli Foreign Service, the U.S.-born former diplomat went into the private sector and applied his matchmaking skills in bringing the two countries together on a project close to his heart. 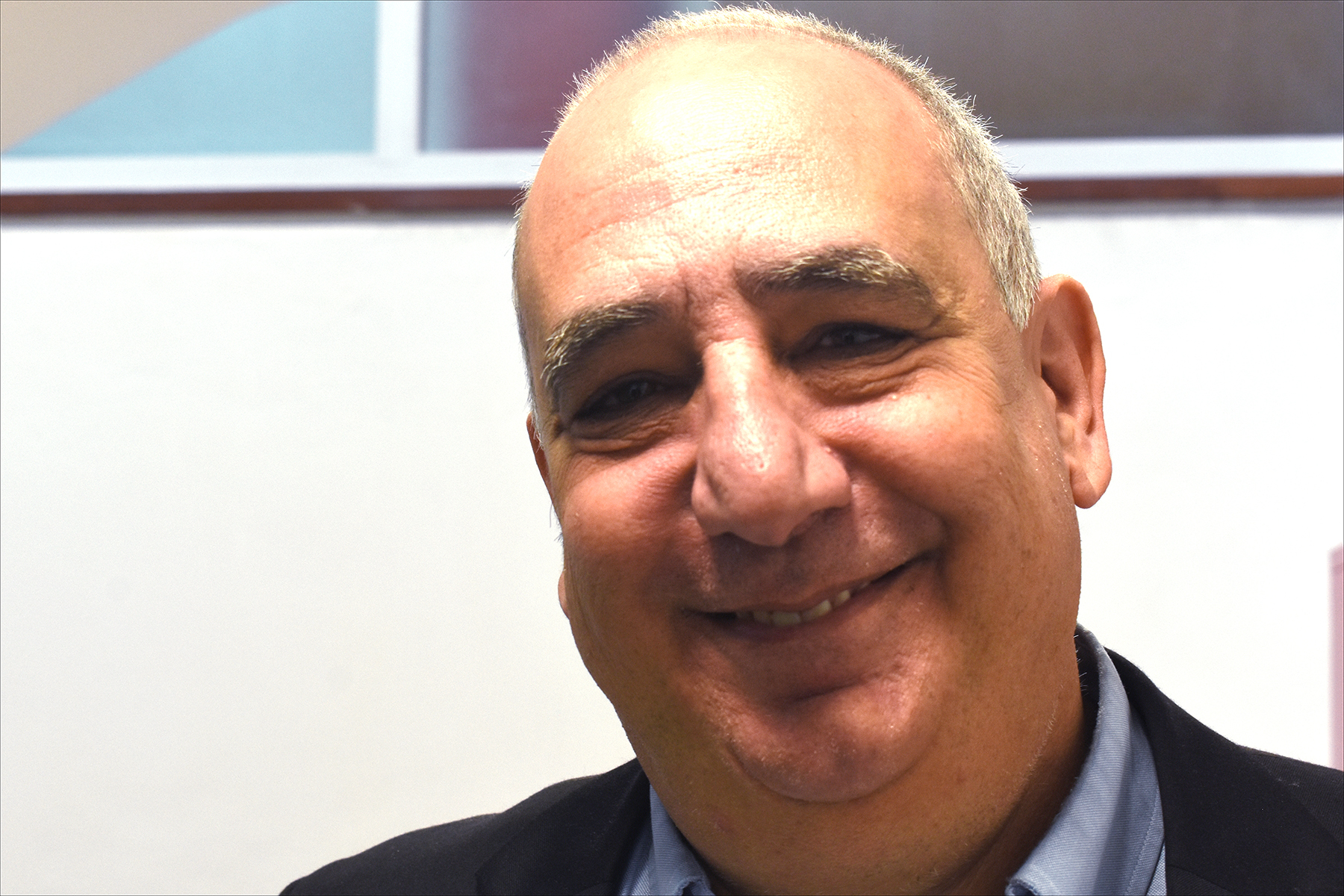 During a trip to Baku in November 2017, Lenk met with Azerbaijan’s then-minister of education (and now economics minister) Mikayil Jabbarov, who later visited Israel.

“We introduced him to ORT and how it teaches the next generation of Israeli innovators. He invited [ORT Deputy Director] Yoel Rothschild and me to come back to Baku, meet his successor and present a proposal,” Lenk said. That resulted in a contract to bring an initial 50 high-school teachers and 10 principals to Israel for a four-week training session earlier this year.

On Monday, a second group of 50 teachers — mostly women in their 20s and 30s — wrapped up their 24-day course in Israel with a catered lunch and closing ceremonies at ORT’s R&D Center in the Yad Eliahu district of Tel Aviv. And next week, 12 principals will arrive from Azerbaijan.

All those teachers and principals have become the local pioneers of ORT Israel’s iSTEAM program — which stands for innovation, science, technology, engineering, arts and mathematics. The idea behind iSTEAM is to incorporate project-based learning while obscuring the boundaries between school disciplines so that students will acquire the practical skills they need for the 21st century. 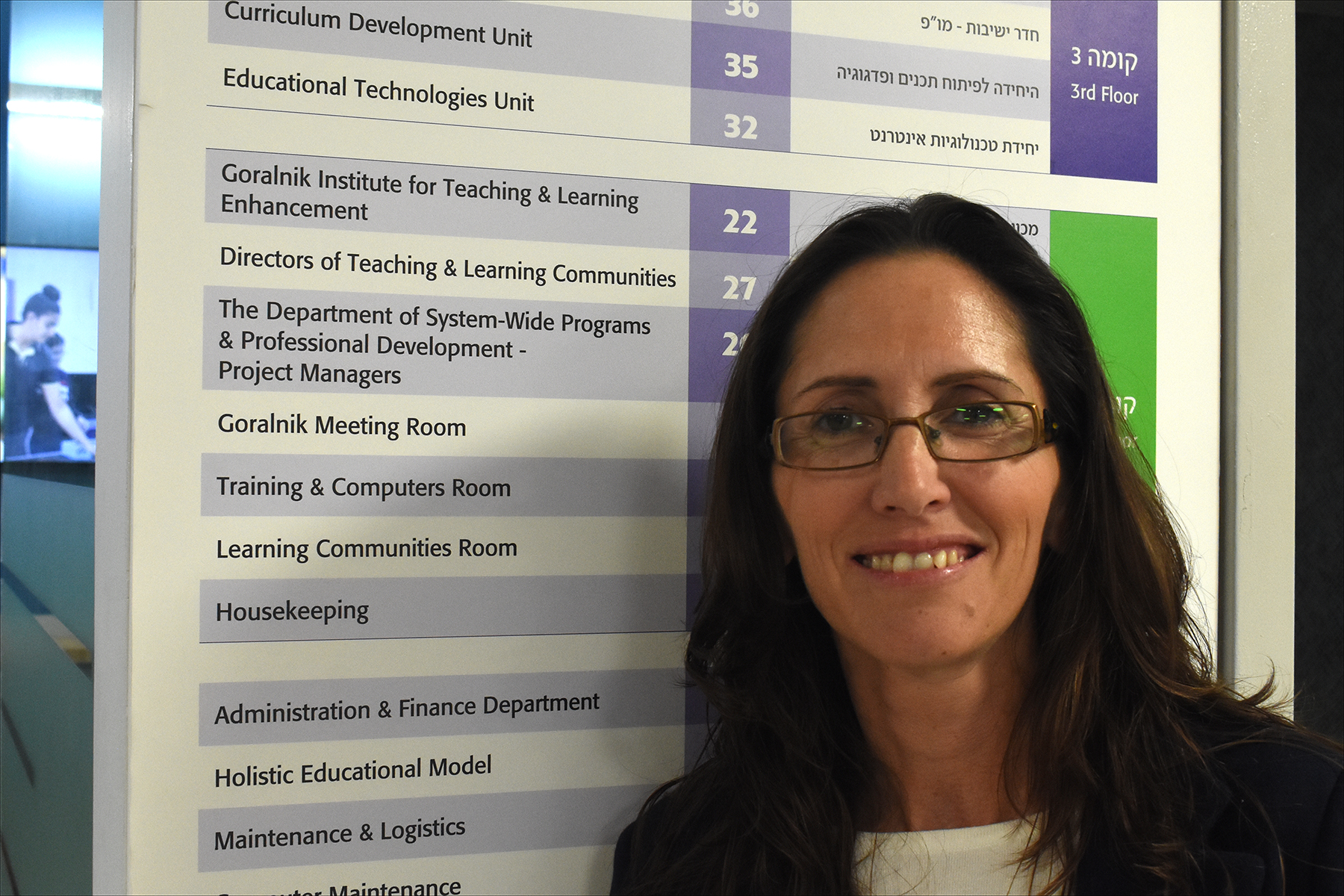 “There’s lots of great potential,” Lenk said. “By the end of this year, 100 teachers and 20 principals will have visited Israel and completed courses here. Each teacher can teach 100 kids, so that’s 10,000 kids. Hopefully we’ll pick out the best ones and they’ll become trainers too.”

One of those teachers is Bakhtiar Mammadov Besir, a seventh-grade chemistry instructor from Baku.

“I came to Israel to observe how they apply this iSTEAM process in their schools here,” said Mammadov, 26. “Israel has very advanced technology. Our students know a lot, but they would do better if these methods were applied.”

Likewise, Lale Kerimova teaches at Baku’s prestigious Arif Huseynzade School No. 20, which was inaugurated two years ago by the country’s president, Ilham Aliyev. During these past three weeks in Israel, she also served as one of two interpreters for her group, translating between English and Azerbaijani.

“I think we’re going back with a lot of new information,” said Kerimova, who’s been a teacher for 17 years. “We’ll use it in our schools and our lessons. We must work with our students to teach them how to create technology, not just to import it.” 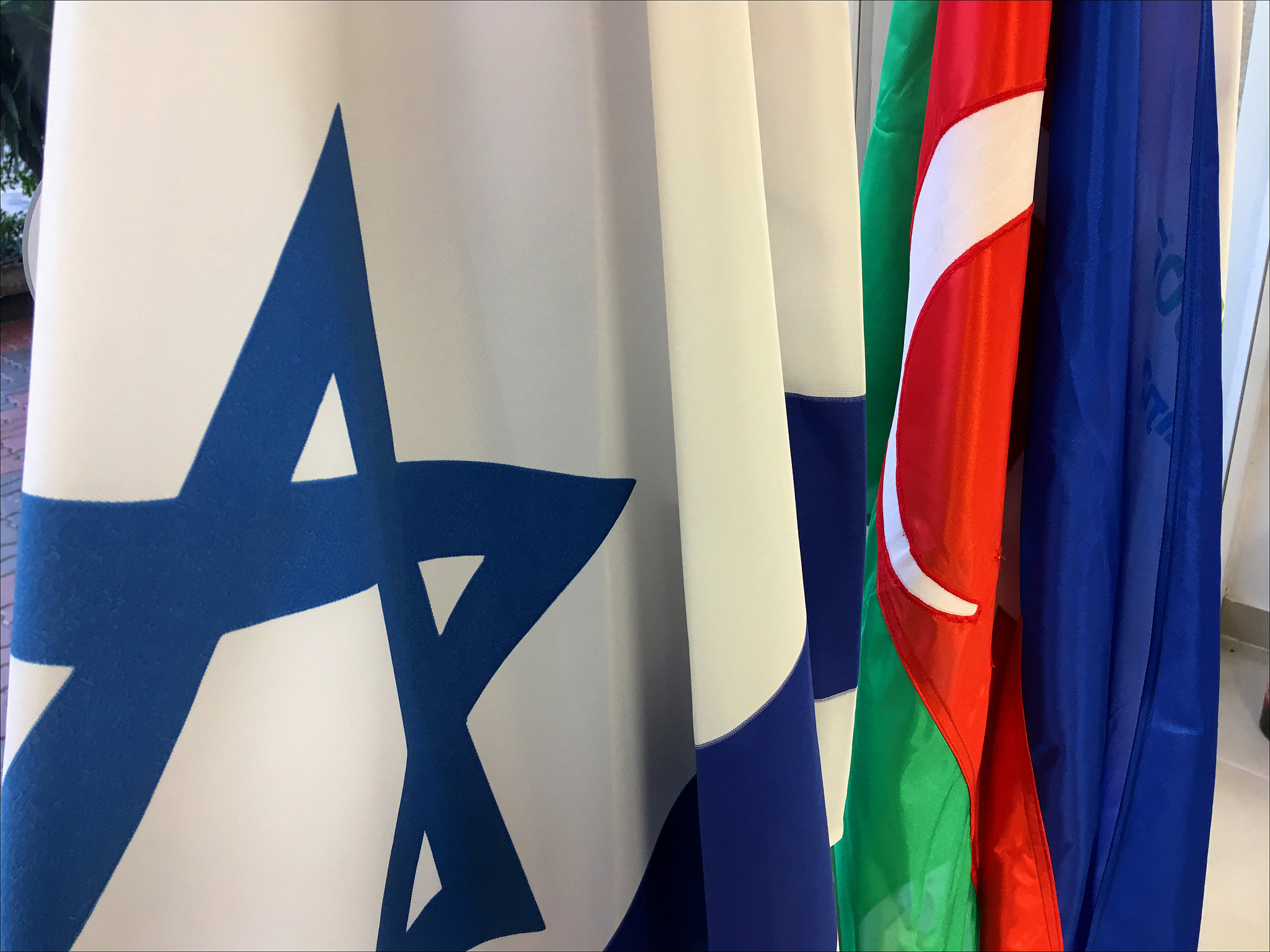 Flags of Israel and Azerbaijan decorate the lobby of ORT’s R&D Center in Tel Aviv as 50 Azerbaijani teachers mark the end of their 24-day visit to Israel. (Larry Luxner)

The organization also exports its knowledge, using its international programs to generate revenues that finance its work in Israel. ORT has trained teachers of Jewish schools in the United States to use its iSTEAM methodology, as well as teachers visiting Israel from Russia, France and the Philippines.

Looking to the future

But the Azerbaijan project is the largest yet in terms of the number of participants involved.

“The ultimate goal is that teachers in Azerbaijan will use our curriculum developed here and bring innovation to their classrooms,” said Shai Lewinsohn, director of ORT’s resource development and external affairs. “The government sends them here. ORT is being paid only for the training, not for their stay.”

In mid-November, a five-member Azerbaijani delegation came to Israel with the goal of strengthening bilateral ties, with a special emphasis on the Azerbaijani Jewish diaspora living here. The two countries are linked with once-a-week direct flights between Tel Aviv and Baku, and increasing numbers of Israeli tourists and business executives traveling to Azerbaijan. 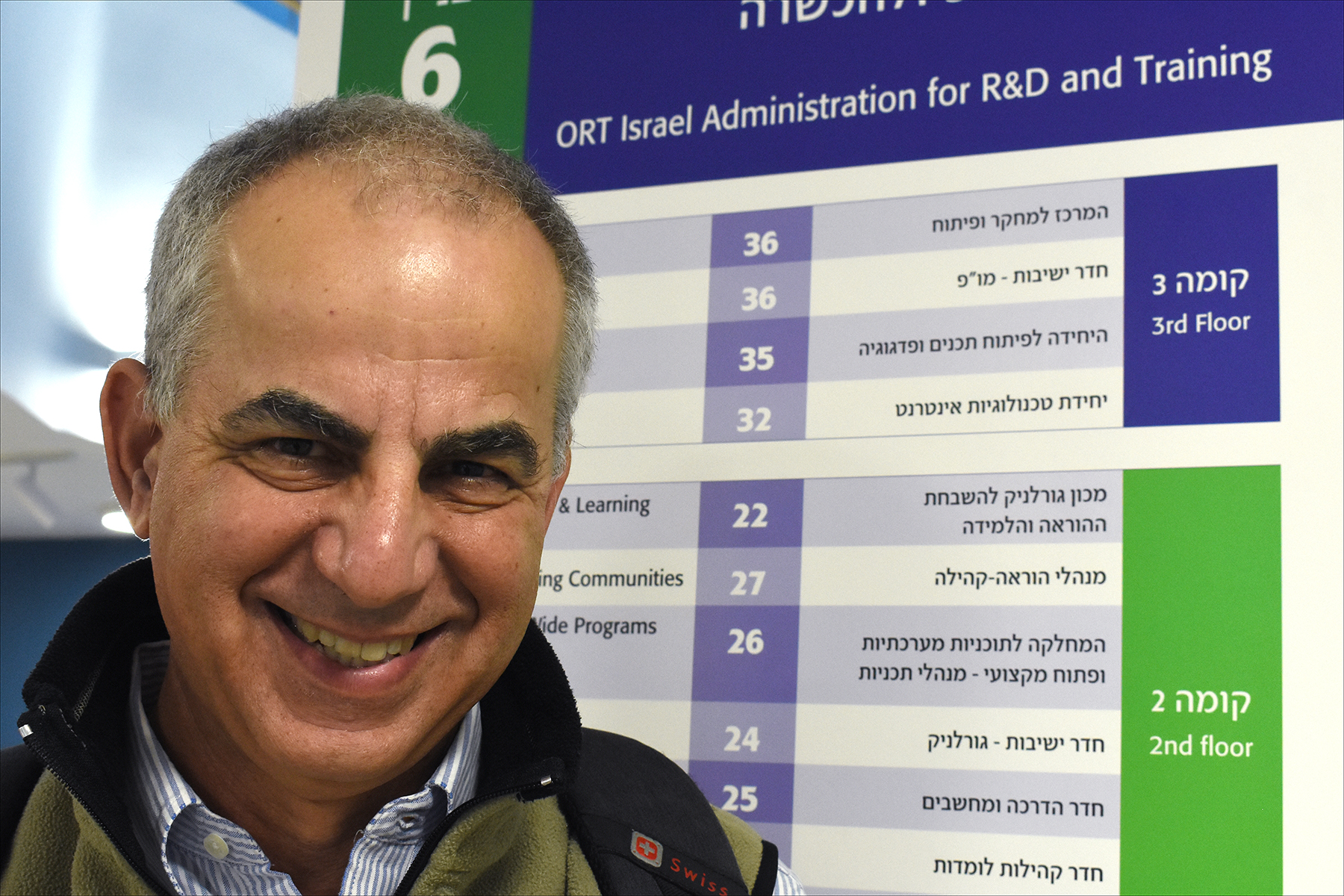 Lenk said this latest effort is a natural outgrowth of the trust and goodwill Israel has built with Azerbaijan over the years through cooperation on energy and defense.

“It’s a rarity in our world, for a Muslim country to partner with Israel and send their women there. This is not just another education program. They’re saying, buy one less tank and let’s spend our money on our real future,” he said.

Lenk isn’t sure how many Azerbaijani teachers will come to Israel in 2020, but he hopes the unusual program to continue generating success for many years to come.

“The friendship and empathy of the shared interests of Israel and Azerbaijan is certainly a model of what relationships with other countries should be like,” he told me. “Sometimes, in a relationship, one side is giving and the other side taking. With this relationship, we’re both giving and we’re both taking. How beautiful is that?”