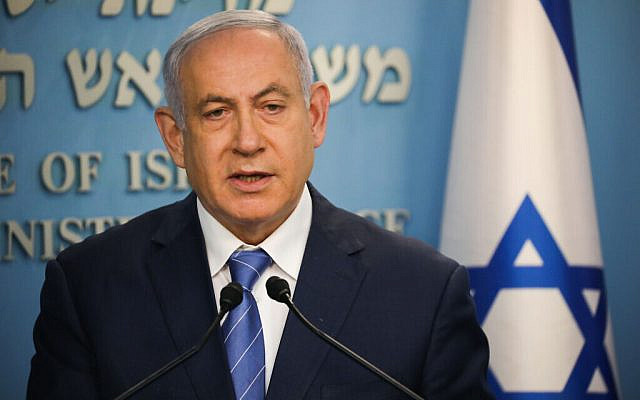 Prime Minister Benjamin Netanyahu speaks during a press conference about the coronavirus COVID-19, at the Prime Ministers Office in Jerusalem on March 25, 2020. (Olivier Fitoussi/Flash90)

Israel’s apparatchiks seem especially diligent these days in emphasizing that they only recommend corona mitigation measures while it is the prime minister who decides. Their humility seems more fervent by the day, as if directed by some master puppeteer.

And it seems a little odd, because formally, in fact, the Cabinet decides. Yet this weekend it happened again: measures to ease the closure were announced prematurely, as if they were a fact even before the rubber stamp, with Netanyahu front and center, speaking in first person. I spoke with a professor; I’ll receive the report; I’ll decide.

Could the prime minister be insistently framing the discussion in a way calculated to help him survive his legal entanglements after losing an election? It’s safe to say that almost everyone can see it. So why is the public not more upset?

The strategy works because Netanyahu has used his gift for propaganda to create a false impression of world-class success in fighting the coronavirus. He exploits every stage to paint a misleading picture of Israel prevailing against all odds on account of a special sagacity only he can offer. He is aided by a pliant broadcast media, so desperate for ratings that it cheers on the leader, troubles little with critics, and presents publicists as analysts.

Netanyahu was quick off the mark, but otherwise has done nothing brilliant or original during this crisis. The steps Israel has taken have been the average steps of developed nations. The government did not have the courage to stamp out the virus with a monthlong total lockdown, which may have been preferable. Neither does it appear to have seriously contemplated more surgical and liberal approaches that would have raised the short-term death toll but possibly saved lives down the line and avoided economic meltdown (as Sweden has done, with the outcome yet to be discerned).

And what are the results for Israel? According to official data Israel has to date suffered 19.25 deaths per million people, about the same as Hungary. That means 26 countries have it worse, and perhaps 200 theoretically have it better (though in many the data can’t be trusted). Nearby Greece and Cyprus have lost about 10 per million – meaning half. Finland, 16; Czech Republic and Serbia, 17. In Romania it’s 22 and in Turkey 23.

So Israel is in a middling place in the middle, and is doing worse than some countries that are less wealthy, even though it is far easier to isolate because due to the limited and well-secured points of entry. It adds up to a B-minus on the American scale of grades. Why is Startup Nation not doing better?

Maybe it is because the government was slow to demand acquiescence from the Haredim, which is where the big infection numbers can now be found, and whose political representatives are critical to Netanyahu? Maybe it is because the government was afraid to enforce its own regulations on quarantining arrivals from the United States, perhaps for fear of upsetting Donald Trump (and again the Haredim)? Maybe it’s because the medical system has been underfunded during Netanyahu’s decade in power, to the point that by important measures like hospital beds per capita it is below the average in the OECD?

And maybe it’s because the government is in fact handling the crisis in the Israeli tradition of arrogant improvisation. When they lack masks we hear that masks are not critical; the moment the shortfall is resolved, everyone is ordered to wear masks even when taking out the trash. Anyone familiar with the the distance learning issue knows how badly it has been bungled, and the teachers are still being properly paid. Independents and small businesses  desperately await the promised compensation.

Despite these mixed results, Netanyahu’s narrative of success has compelled poor Benny Gantz to drop his central demand that his election victory be respected and that the prime minister step aside. Gantz has fallen for the spurious argument that Netanyahu should be forgiven everything because the coronavirus has changed reality. In this he let Netanyahu control the message – a sure-fire way to remain in opposition. The virus indeed changes the perception of reality if we allow it to do so. A straight line leads from accepting Netanyahu’s argument to polls that show the right now in the lead. From weakness does not come strength.

There is no sacred principle against changing horses in the middle of a battle. Israel changed its defense minister in the days before the Six Day War. A more plausible idea is that you don’t change winning horses. That is why it is so important for Netanyahu to creating the impression of victory.

In this situation, we have a classic illustration of what Natanyahu himself said about Olmert:  the things he says and the decisions he takes cannot with any confidence be considered free of political motivation. One day he spreads panic about tens of thousands of deaths — and the next he decides in his munificence that we can roam 500 meters. Every decision can reasonably be suspected of being aimed at further delaying his bribery trial (it is now set for May).

He barely even hides it. A few weeks ago Netanyahu was arguing that the crisis demanded an emergency government (headed by him, of course). With Gantz having agreed, it seems the prime minister is no longer in a hurry and is insisting Likud be allowed to veto judges (!) and override the supreme court should it block a criminal defendant from forming a government. Shamelessly, street violence is hinted at should he be toppled from his throne.

Netanyahu deserves no prizes for his handling of corona. And Gantz has no real reason to give in.

One can only hope the former chief of staff understands the Machiavellian nature of his would-be partner. It’s not too late for a u-turn. Despite complications of his own device, Gantz still has a majority in the Knesset. Why not use it in the two weeks left until the Knesset automatically dissolves? All it needs is courage, which generals supposedly have in spades.