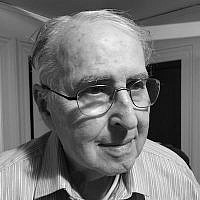 The Blogs
Steven T. Katz
Apply for a Blog
Advertisement
Please note that the posts on The Blogs are contributed by third parties. The opinions, facts and any media content in them are presented solely by the authors, and neither The Times of Israel nor its partners assume any responsibility for them. Please contact us in case of abuse. In case of abuse,
Report this post.

I recently had the opportunity to view Baltic Truth, a new film produced by Eugene Levin and Andrejs Hramcovs. It is an impressive documentary review of the Holocaust in Latvia and, to a lesser extent, in Lithuania. While much has been documented regarding the Holocaust in Lithuania, Latvia has not received the same attention, so this perspective is a welcome and important addition.

The film’s strength lies not only in the high professional quality of the photography and script, but also in its emphasis on the human side of the story, of both victims and victimizers.  In retelling this story, the makers of the film have, very effectively, used footage from film archives mixed with personal interviews, not only from Jewish survivors and witnesses but also from Latvian and Lithuanian witnesses, along with the commentary of contemporary scholars.  The power of this varied material is considerable.  The photos from the war years and the spoken commentary representing diverse perspectives on the events covered give the history being reexamined a special intensity.

The film begins by asking important questions about the happenings in Latvia, especially regarding the role played in the mass murder of Jews by their non-Jewish neighbors.  In doing so, it sets the historical context with skill and accuracy and highlights the failure of Latvians (and Lithuanians) to recognize, and oppose, the evil that they were enmeshed in.  The makers of the documentary appropriately highlight the central claim used to justify the mass murder of Jews, namely, that Jews had collaborated with the Russian state that briefly took over control of the Baltics in June 1940.  This partial truth was exaggerated out of all reasonable proportion, in order to legitimate annihilation.

Having explained the historical context, the film then provides an intelligent and moving picture of the Riga Ghetto and the mass murder of Jews in the Rumbola forest. This is done as part of a broader description of the destruction of the 100,000-plus pre-war Latvian Jewish community, a destruction in which the non-Jewish Latvian population played a central part.  At Rumbola, 25,000 Jews were exterminated in the space of two days.  Also described is the criminal action of the Arajs Commando unit that played a prominent role in the elimination of Jews in Rumbola, Riga, and the Riga Ghetto.  In all of these places, Jews were killed by these criminal local actors without significant German involvement or interference.  Also rightfully emphasized is the attention given since the end of the war to a number of local killers who, in spite of their monstrous behavior, have been honored across Latvia.  These include Waffen SS legionnaires, commemorated in the city of Lestene in 2019, and Vilas Tunkelis who has been twice honored with public monuments, despite his horrific actions in orchestrating the murder of the local Jewish population.

The film’s treatment of the annihilation of Lithuanian Jews occupies the last quarter of the film and is also persuasively presented.  In summary form, it briefly, but accurately, narrates the history of the murder of almost all the 100,000 to 120,000 Jews in Lithuania by a combined force of German Einsatzgruppen (killing squads), ordinary police units, and Lithuanian auxiliaries.  Regarding this mass slaughter, that essentially eliminated Lithuania’s Jewish community, the film rightly emphasizes the centrality of the murder of Jews outside the capital Vilna, in the Ponary forest, that was approximately six miles from the city.  It was at this barren location that 70,000 inhabitants of the Vilna Ghetto were exterminated in pits in which they were forced to lie down and were shot from above.  In this, and related actions, it was local Lithuanians who played a large role, not only in the executions themselves but also in rounding up Jews, conveying them to the killing site, pulling out their gold teeth, and trading the clothes of the dead.

Beyond Vilna and Ponary, the film covers the story of the Kaunas (Kovno) ghetto where 40,000 Jews were done away with, as well as the slaughter at the infamous Ninth Fort, a facility turned into a prison where Jews were held, tortured, and annihilated.  Ten layers of Jewish bodies have been found in the killing pits at this location.  Here again, the producers of this film have, very thoughtfully, retold not only the story of the murders but have also presented a report regarding how, since the end of World War II, many of the Lithuanians who were perpetrators of these crimes have been honored as national heroes.  In so doing, the film makes very effective use of the individual stories of these local killers, as chronicled by Ruta Vanagaite, herself a descendant of the perpetrators, in her important book Our People: Discovering Lithuania’s Hidden Holocaust.

To the credit of the filmmakers, the story they tell ends by properly noting that there were also a small number of Latvian and Lithuanian “rescuers.”  At Yad Vashem, Israel’s Holocaust Center, 720 Latvians have been honored as “righteous among the nations” for their wartime efforts to save Jews, and 873 Lithuanian individuals have been awarded the same honor.

The events in the Baltic during World War II are not as well-known as Nazi atrocities in Germany and Poland, and the makers of this documentary are to be thanked for advancing our knowledge and understanding of these lesser-known events, especially where Latvia is concerned.

About the Author
Steven T. Katz is the Alvin J. and Shirley Slater Professor of Jewish and Holocaust Studies at Boston University. He serves on the academic committee of the US Holocaust Memorial Museum and from 2011-2017 was the academic advisor to the 34 countries of IHRA, the International Holocaust Remembrance Alliance. He has lectured around the world and is the author or editor of 26 books, the most recent of which is The Cambridge Companion to Antisemitism (2022).
Related Topics
Related Posts
Steven T. Katz