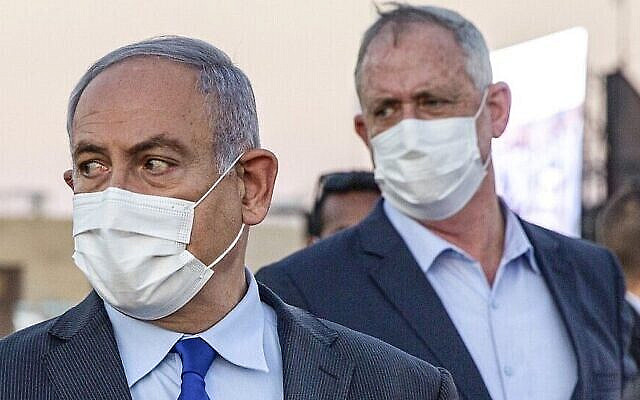 In his recent interview on these pages, Benny Gantz asked rhetorically whether Israelis prefer a “man of integrity” like himself, or “a maneuverer and a liar” such as the incumbent. When politicians draw such a contrast they assume integrity sells best. But I fear Gantz is missing something here.

I would advise the Blue and White leader, much derided for his credulous decision to join Netanyahu in now-defunct “unity” government last spring, to consult the Netflix hit I Care A Lot. It opens with a monologue that nails the spirit of our age.

“Playing fair is a joke invented by rich people to keep the rest of us poor,” says the magnetic Marla Grayson, whose vocation is tricking the system into appointing her “guardian” of elders she then robs.  “’Cause there’s two types of people in this world: the people who take, and those getting took. Predators and prey. Lions and lambs. And I’m not a lamb.”

Versions of this idea are as old as the hills, gaining currency whenever the times turn tough.  Honore de Balzac gave it eloquent life in his novel Pere Goriot from 1835, a period when France was dominated by a exploitative bourgeoisie – a little like today’s West.

“There are but two alternatives—stupid obedience or revolt,” the charismatic Vautrin advises a young student. “Honesty is nothing to the purpose … Corruption is a great power in the world. Moralists’ strictures will never change it. … The secret of a great success (is) a crime that has never been found out, because it was properly executed.”

When Vautrin is himself discovered to be a wanted criminal and hauled away by police, onlookers support him and turn viciously on the snitch.  So it can be when there is anger at the system.

In the two centuries since pre-Victorian times the West has tried to build something fairer: social safety nets, universal human rights, protection of minorities and equality under the law. Liberal democracy, in short.

But the wheels are coming off the ideals these days. Globalization, technology, climate change and migration have whipped up such a frenzy that democracies, with their assumption of a comprehending and rational public, are in significant distress.

America offers the most shocking indication of it. Despite great wealth the United States has the worst inequality in the developed world (Forbes found almost two-thirds of Americans couldn’t cover a $500 emergency). In the past 40 years the middle class has stagnated while CEO pay has risen tenfold.  Just when it needs healthcare, America tolerates tens of millions without health insurance. It has the world’s only student debt crisis. And none of it seems fixable because of an ossified setup underpinned by a non-egalitarian electoral system greased by corporate money. Vautrin would approve.

This incredible situation actually made Donald Trump sound truthful when in 2016 he said: “It’s a crooked system, folks… I have seen firsthand how the system is rigged against our citizens. If you think about it the economy is rigged, the banking system is rigged.”

America is full of people who bond with this message no matter the messenger. They are egged on by the likes of Fox’s Tucker Carlson to distrust the “mainstream media,” the cultural gatekeepers, Wall Street, academia, science and definitely “the government.” That is why so few seem to care about Trump’s scams and why despite the deadly Jan. 6 riot at the Capitol, Senate Republicans acquitted him without concern.

The power of this contemptuous narrative is why one finds admiration around the world for Russia’s Vladimir Putin, whose thuggery, mendacity and corruption leap straight out of the pages of Balzac. Putin understands that “honesty is nothing to the purpose.”

Which brings us to Israel, where Prime Minister Benjamin Netanyahu is running on a version of this idea. He is able to  convince people that “elements in the police and prosecution have joined the leftist media in stitching up indictments” on bribery, fraud and breach of trust.

He tells his followers that everything is a conspiracy and that they need him to be scheming on their behalf (for example, suggesting daily that his brilliance gamed the system to get Israel COVID vaccines).

Many Israelis consider Netanyahu a crook, but don’t mind it. Check out Eretz Nehederet’s candid-camera-in-a-cab sketch from last week in which citizens display laughing indifference at the charges against him.

“You’re saying it’s better to be a corrupt, cunning politician than a person of integrity and statesmanship,” Gantz marvelled, addressing the imaginary Netanyahu voter. And the answer is yes, you got that right.

For the growing group of nihilists angry at the world, chicanery is no vice. They back the likes of Putin, Trump and Netanyahu in part because they are perceived as crooked. If Gantz was the prey, they’ll cheer the predator.

This degree of cynicism, hopelessness, indecency and anger is the real pandemic, and fixing it will not be easy. But admission is the first step to recovery.

Oscar Wilde said that “life imitates art far more than art imitates life.” How do we know we’re living in a dark times?  When life imitates dark comedy on Netflix.