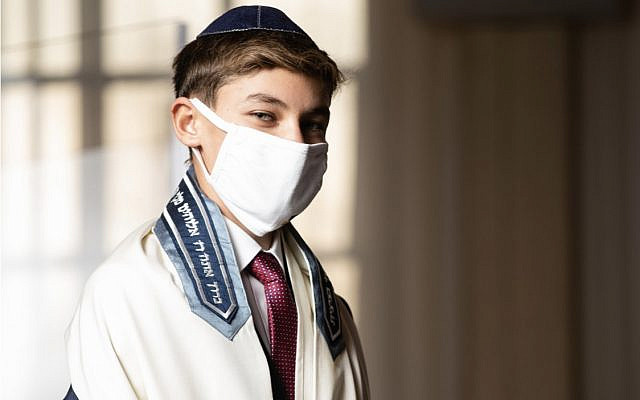 Celebrations in times of trouble. (courtesy)

Years ago, I read a beautiful story about a tiny Torah scroll hidden in the Bergen Belsen Concentration Camp used to help teach young boys to read and become a Bar Mitzvah while in the camp. Although the Rabbi that kept the Torah and taught the boys did not survive, the scroll itself did. The scroll made it to Israel and through the incredible world of Jewish connections, was taken up to space with Israeli astronaut Ilan Ramon. The Torah scroll along with Ramon and the 6 other astronauts were lost to the world when the Columbia spacecraft exploded on February 1, 2003.

Over the past few weeks, as my middle son has prepared for his own Bar Mitzvah under very uncertain times, I have thought a great deal about the story of that Torah. In fact, I’ve thought a great deal about all the young boys (during the time of the Holocaust it would have only been boys) that never had the ability to stand in front of their families, friends and communities and do what had been done for generations before them – be called to the Torah.

I was never quite sure if it was law or a commandment, but I have always known that we as Jews have been taught to celebrate the good times. To dance and sing and eat and drink. My grandmother and my great aunts would always reply to an invitation with, “I will be there with bells on.” And they always were – at any celebration, a Bar or Bat Mitzvah, a wedding, an anniversary. Even at birthday parties and family reunions my family would burst into song and dance – as a child those horas seemed to last forever.

And now here we are in the world of the COVID pandemic – a world where gatherings, if any, are limited. Eating and drinking are done only with our own nuclear families or bundled up outside – and a 200 person 30-minute hora seems to be a thing of the past. Yet unlike a wedding that may or may not be able to be pushed out, young Jewish adolescents are still turning 13. And just like the boy in Bergen Belsen, they should have the privilege of being called to the Torah for the first time as they reach adulthood.

As the lessons of the Holocaust have taught me over and over again – to be Jewish and to live a Jewish life — is the way in which we know that Hitler did not win. At any point under Nazi occupation – in hiding, in the ghettos or in the camps – a child having a Bar Mitzvah was a true act of defiance. It was the epitome of continuing on with our traditions no matter what, as new generations of Jews will come forth. Luckily, that new generation has grown and grown and us new Jewish adults are joining their communities 75 plus years after the end of the Holocaust.

Over the past few months, these words and thoughts have echoed within me repeatedly. As we have questioned what this day would now look like. Would it be at our synagogue, at home, on zoom – or a combination of all three? Regardless of the details, the constant would be that a Bar Mitzvah will take place for my son as he reaches the age of 13.

When the young boy in Bergen Belsen was called to the Torah, his mother snuck over from the women’s camp to be present. Despite the danger to her, she looked on as her son became a Jewish man, but he was without his father, the rest of his family and so many loved ones that he would never see again. At the completion of his reading, although there could not be a traditional celebration but there were whispers of Mazel Tov from the men in the bunk and gifts of a small piece of chocolate, an extra heal of stale bread, a deck of playing cards, and eventually, the small Torah scroll – possibly the greatest gift of all.

Today, we are so much more fortunate. No one will be in real danger watching as my son becomes a Bar Mitzvah; that can all be done safely thanks to modern technology. He will be called to the Torah in front of family, friends and our synagogue community. Of course, the aunts, uncles, cousins and friends, will not be dancing with bells on till all hours of the night, and yet although I learned from my Rabbi today that Deuteronomy 16:14, does in fact command Jews to celebrate, how and when we “celebrate our festivals,” is all up to interpretation; the act of becoming a Bar Mitzvah, being called to the Torah for the first time is a celebration all on its own.