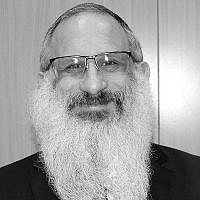 The Blogs
Baruch Myers
Apply for a Blog
Advertisement
Please note that the posts on The Blogs are contributed by third parties. The opinions, facts and any media content in them are presented solely by the authors, and neither The Times of Israel nor its partners assume any responsibility for them. Please contact us in case of abuse. In case of abuse,
Report this post.

In a recent article, entitled “In Slovakia, Acts Of Memory,” Helene Silverberg writes that the bar mitzvah ceremonies in Slovakia of her two nephews “have…reminded us of the importance of preserving Jewish history.” She continues, “Finally, my family has come to appreciate the heroic efforts of Jews in places like Bratislava.”

It is therefore regrettable that the article contains significant historical omissions that do injustice to the history of Slovak Jews and the heroic efforts of many during the Totalitarian period. The article also does not present an accurate picture of our community and its revival efforts in the present.

Ms. Silverberg writes that the bar mitzvah of her nephew in Samorin in July 2014 was the first bar mitzvah celebration in Slovakia since the end of WWII, besides the sons of the rabbi. With this assertion, the author erases entire chapters in Czechoslovak Jewish history.

After the end of WWII, those who returned from the concentration camps or emerged from hiding were reeling from the unimaginable trauma of the horrors they experienced. Yet, even in those years, they bravely re-established religious life. Our cantor of many years, Shlomo Kedar, was bar-mitzvahed in our Orthodox synagogue in 1946. In that same year, our former Federation vice president, Jewish figure, Dr. Jozef Weiss, had his bar mitzvah ceremony in the Topolcany synagogue, after returning from his family’s hiding place in the Tatra mountains.

Fast forward to 1948. To be sure, the totalitarian regime of the Czechoslovak socialist republic did not make active Jewish religious life easy. And while many, and probably most, Jews did feel intimidated by the system, many others all over Slovakia did participate in active Jewish life, including making bar mitzvahs. For their courage, they are all the more worthy of remembering, rathering than ignoring. Far from appreciation of “the heroic efforts of Jews in places like Bratislava,” the article completely ignores this fascinating and inspiring story.

Between 1948 and 1989, there were an estimated 100 bar mitzvah ceremonies in Slovakia. The earliest bar-mitzvah ceremony of the socialist period that I have discovered thus far was that of Mr. Jozef Pevny, who had his bar mitzvah in the Neolog Synagogue in May of 1948. It should be noted that between 1950 and 1968, the Bratislava Jewish Community had a chief rabbi, Rabbi Elias Katz.

The community of Galanta boldly kept all of the holidays and had regular services throughout the years of Communism. It is estimated that in Galanta alone there were over 50 bar mitzvahs during the socialist period. So too, the town of Hlohovec celebrated many bar mitzvahs, thanks to the teacher Mr. Binyomin Gluck, a near-saintly figure, who passed away several years ago.

And what about bar mitzvahs after the Velvet Revolution of 1989?

Since my arrival in 1993, I have officiated at 14 bar mitzvahs, not including my own sons. Ten of those had already taken place before the reported “first” bar mitzvah in Samorin in 2014.

Most of those boys, naturally, were from local Jewish families. A bar mitzvah in 2012 eloquently illustrates the interaction of Slovak Jewish past and present. The celebrant was a bright young man named David Feldmar, now studying medicine. In his speech, he spoke about how his grandfather, Fridrich, turned 13 in the Terezin concentration camp. His grandfather’s passage to Jewish adulthood was marked by a Pentatecuh he received from a fellow inmate, a rabbi from Amsterdam.

A few of the bar mitzvahs were from Jewish ex-pat families. They were no less memorable. Abe — today a tech entrepreneur in San Francisco — had his bar mitzvah in our synagogue in 2006. Abe’s mother was at that time a United States Embassy employee. Abe’s father is an Arab Muslim, who enthusiastically designed the beautiful invitation for the occasion.

And in 2003, I was approached by a family who were members of the Bnai Israel Reform Congregation in Sacramento, California. They decided to honor the memory of Slovak Jews that perished in the Holocaust by making the bar mitzvah of their son in our synagogue on Heydukova Street. I mention this last example to underline the efforts of our community to welcome and unite Jews from all backgrounds.

In spite of this, the article erroneously refers to our community as “ultra-Orthodox.” In fact, our synagogue is the historical Bratislava Orthodox synagogue, built in 1926. Yet the vast majority of our members are not observant and most of my regular minyan attendees are intermarried. They are, like many Europeans, non-observant Jews who choose to worship according to the traditions of their parents.

It is a sense of continuity that characterizes the Jewish re-awakening in Slovakia. Whether it be bar mitzvahs, bat mitzvahs, weddings or circumcisions, the significance of these Jewish life-cycle events is not that they are somehow a “first,”, but that they are a continuation, restoring of a link in a chain reaching back to previous generations and forward to future generations.

About the Author
Baruch Myers, a native of New Jersey, has served as the official rabbi of the Jewish Community of Bratislava, and the emissary of Chabad Lubavitch to Slovakia, since 1993.
Related Topics
Related Posts
Comments