Former First Lady and First Mom Barbara Bush left us on April 17, 2018. No other woman besides Abigail Adams held both titles in history. She died in 1818, exactly 200 years ago.

Besides that fact, Barbara Pierce Bush left a legacy as THE fashion icon like no other. Her look was ageless, sizeless, seemed effortless and most important, represented a strong and beautiful woman, inside and out. She leaves an indelible impression on Jewish fashionistas, especially religious ones who follow the guidelines of tznius dressing.

It was probably no coincidence that everyone associates Barbara Bush with pearls. Why pearls? Did looking at those pearls on her ears, around her neck or on her wrist make everyone listen to her amazing “Words of Wisdom?” Pearls represent experience, generosity, integrity, wealth and luck. All words to describe her.

Barbara Bush was born into a life of privilege. In fact, she was a direct, distant relative of President Franklin Pierce, the 14th Commander-in -Chief. Perhaps she got her first taste for classic fashion from the woman’s magazines her father, Marvin Pierce, published. As President of McCall Corporation, he oversaw Redbook and McCall’s among their titles.

Bush’s mother, Pauline, was a socialite, described in a W magazine article as a “beautiful, critical and meddling beauty with extra agent tastes.”

First Ladies are known to have “love affairs” with their favorite fashion designers. Jackie Kennedy had Oleg Cassini, Nancy Reagan had James Galanos and Barbara Bush had Arnold Scassi.

Arnold Scassi was born Arnold Isaacs (Scassi backwards) in Montreal, Quebec, Canada to Jewish parents. He changed his name when he started designing in the mid Fifties, when Cadillac refused to run his given “Jewish-sounding” name Isaacs credits for an ad that featured a model wearing one of his designs, according to published reports and multiple biographies. It was then he decided to start spelling it backward, according to Stan Herman, Fashion Designer and Former President of the Council of Fashion Designers of America, who first befriended the designer in 1953. “At that time, even though Seventh Avenue was considered to be very Jewish, a lot of people were trying to hide their Jewishness,” Herman said.

Scassi was known for the sexy, very revealing Barbra Streisand Oscar outfit. In a different approach to design, he made Barbara Bush look regal. Who could forget her inauguration gowns, those one-of-a-kind pieces Scassi created for Bush as The First Lady for State Dinners and even the daywear for media and White House tours?

When Scassi passed away in 2015, Former First Lady Barbara Bush said, “I loved Arnold Scaasi. He was a dear friend and a brilliant fashion designer who could make any woman feel like a princess. His dresses brought me great joy – whether they were for a state dinner or just a simple suit I could wear anywhere. We sometimes would fight a little about colors and styles, and he, of course, was always right. Arnold’s legacy will be on display forever, thanks to the gorgeous blue Inaugural [Ball] gown he made for me, now at the Smithsonian’s American History Museum. His friends and the world of fashion will miss him terribly.”

Many of the Scassi gowns were coordinated with miniaudieres created by Judith Lieber. Lieber, a Jew from Budapest, Hungary, survived the war and married an American soldier in 1946. Who could forget the matching blue silk and stone bag matching the Scassi gown? Probably her most famous accessory, was the bag made of Austrian rhinestones in the image of Millie, the First Family poodle.

Throughout Her Life, Pearls and Classic Modest Dressing 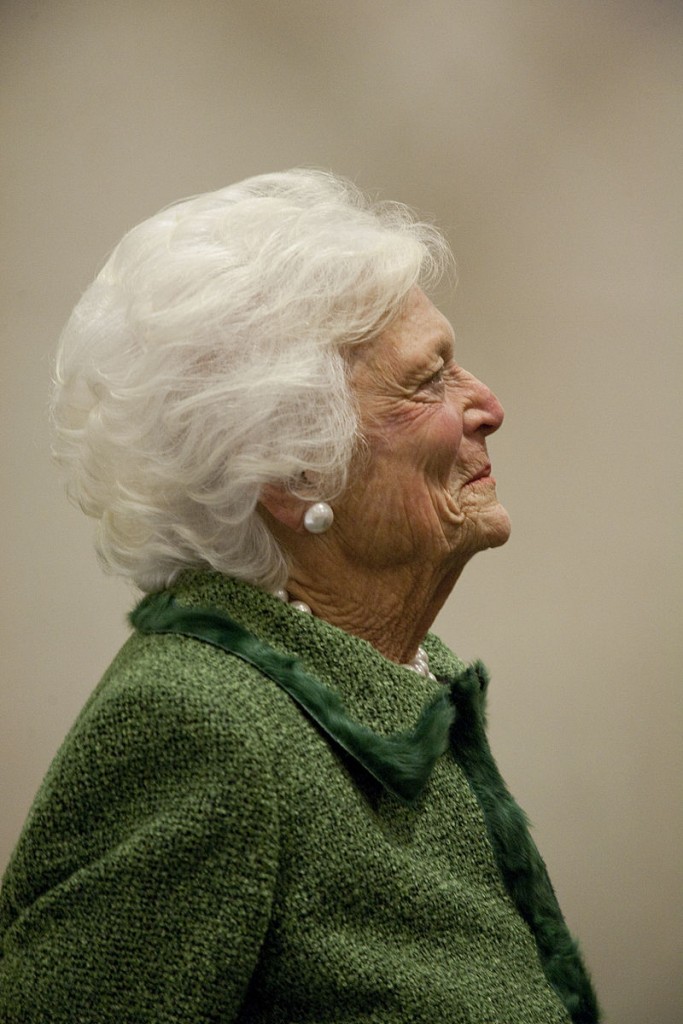 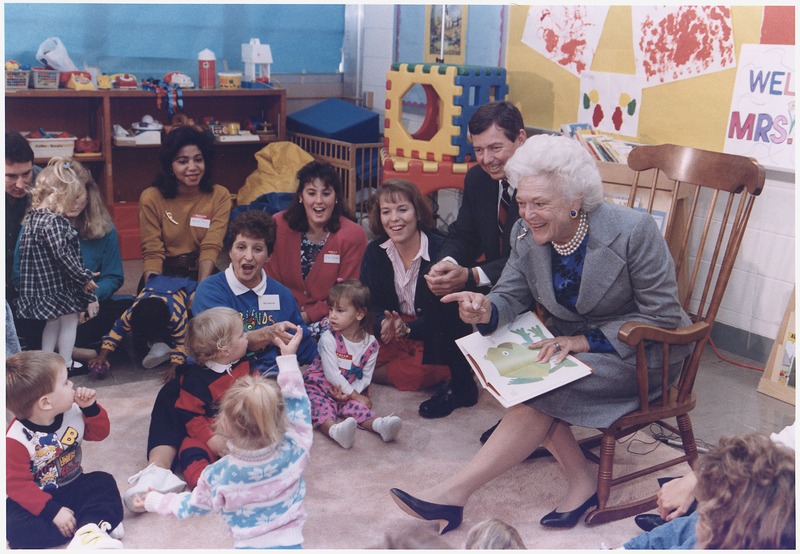 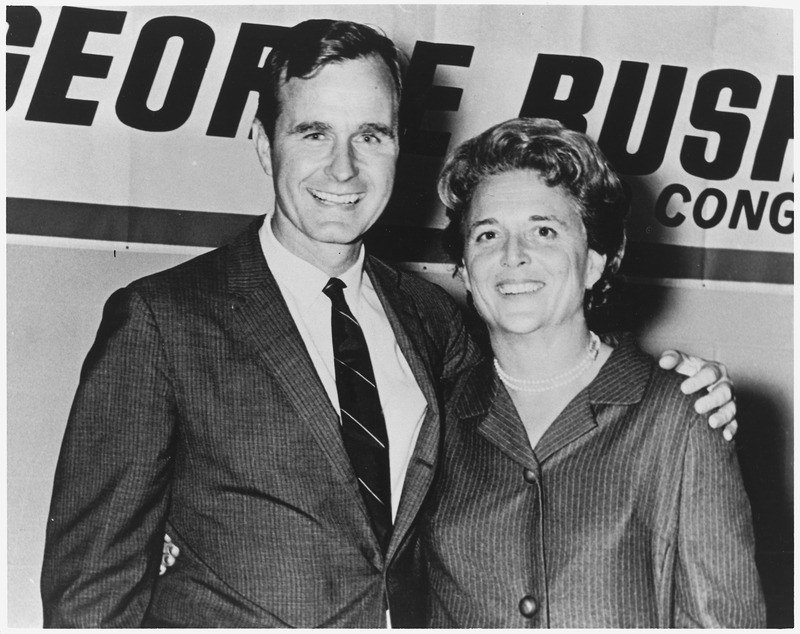 When her three-year-old daughter, Robin, died, Bush became prematurely gray. She became known as “The Silver Grey Fox” and led millions around the world to follow her lead. She never made diet, makeup, new fads or trends. She was always perfectly coiffed, whether driving a golf cart, sitting at a ballgame, or holding her husband’s hand. She made walkers, wheelchairs and even death “fashionable.”

Rest In Peace Barbara Bush. As she said, life must be fun and have joy, and that’s a fashionable rule we can all live by. 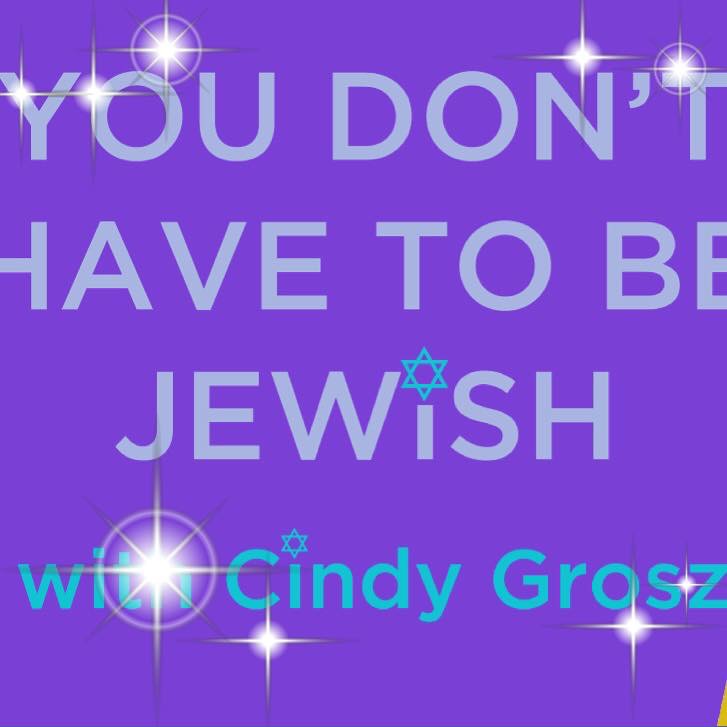