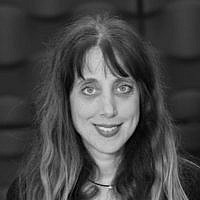 The Blogs
Allana Miller
Apply for a Blog
Advertisement
Please note that the posts on The Blogs are contributed by third parties. The opinions, facts and any media content in them are presented solely by the authors, and neither The Times of Israel nor its partners assume any responsibility for them. Please contact us in case of abuse. In case of abuse,
Report this post.

Today, I attended a bat mitzvah at the egalitarian part of the Kotel. The two bat mitzvah girls and several members of their families were in Israel for the first time. There were many other families trying to celebrate as well. It was my first time visiting the egalitarian section at the Kotel and I could not have imagined what I was about to experience.

During the entire bat mitzvah, Haredi/ultra-Orthodox boys, teenagers, and grown men screamed at us and condemned us (luckily most of the attendees didn’t understand Hebrew), loudly blew whistles in unison in our faces so we couldn’t hear, let alone enjoy the beautiful celebration. It was relentless harassment. What was even more disturbing was the lack of response from the police who said that so long as the boys/men weren’t physically harming us, there was not much they could do, as it was a “public” area. A quick Google search turned up a law on public nuisance. Seems applicable in this situation, but it’s not really the point. Common sense would dictate that harassment was occurring and should have been stopped.

I never knew growing up in the US that my religious beliefs were such a disgust to other Jews. I had never experienced antisemitism from another Jew, or anyone else, frankly. But that is what I experienced today. Not pogroms in Russia, not on the streets of Nazi Germany, but here in Israel.

Let’s say that again. The police and the government allow the ultra-Orthodox Jews to harass Reform Jews here in ISRAEL. In fact, it turns out that one of main instigators today is the son of a Knesset member.

My friends, family, and I were traumatized. I think most about the children that were there. I just cannot fathom how today’s events will shape and affect their feelings toward Israel in the future. But I know one thing — they will never think of a whistle the same way again.

About the Author
US citizen who made Aliyah over 20 years ago. I was brought up conservative/reform and was taught to respect and accept those who are different then me. Sadly, I never experienced religious discrimination until I started living in Israel. Today's experience during a family bat mitzvah at the egalitarian section of the Kotel solidified that religious discrimination is rampant in the one place I was told I could call HOME.
Related Topics
Related Posts