“You gotta visit Napa,” Ari told me fervently. I had always heard wine enthusiasts refer to Napa Valley, California as “Disney Land for adults,” but it wasn’t until I heard Ari describe the festive atmosphere of wine harvest season there that I began to understand what they really meant. Ari recalls the vibe that consumes the entire valley during the month of September almost like a child savoring the buzzing crowds and smell of popcorn when he hugged Mickey Mouse for the first time.

“Being in Napa Valley during harvest season is exhilarating. The entire valley is on the wine clock — everything revolves around wine,” Ari described, attempting to walk me through what it is all about. “The distinct aroma of simultaneous fermentation from the hundreds of wineries in the valley, along with the tangible excitement of all who step foot in the area fill the air. Everyone is up early in the morning picking grapes and out late at night celebrating at harvest parties. Even the synagogues are involved in the festivities – half the members are winemakers!” Ari recalled passionately. “It’s over the top there, each winery has a different theme; one is an Italian castle, another a Persian castle, one tasting room is designed as a Fabergé egg,” he said, shaking his head with his eyes wide open, trying to portray the overwhelming feelings of wonder a visitor in Napa around this time of year could expect.

Going back to the very beginning, Ari was born just outside of Napa Valley, and after spending a few years in Alaska, the Erle family moved back to California, settling in Sacramento, where Ari completed his final three years of high school. “Living just an hour drive away from Wine Country, we would head west on family trips to Napa Valley quite frequently, especially when guests would come visit from out of town,” Ari remembers. Having no idea that just a few years later that valley would change his life forever, he vividly remembers those adolescent trips where he became enamored with the endless rolling hills filled with vineyards, surrounded by the raw nature of northern California.

Upon completing high school, Ari decided to come to Israel on a Jerusalem based year-long leadership program, taking the Zionist ideals he was raised with to the next level. After spending most of his time in metropolitan Jerusalem, Ari was excited to get his hands dirty when he was sent to volunteer on Kibbutz Sa’ad near Gaza. He fondly remembers the days when the hot desert sun beat down on his back as he hitched irrigation tubes over his shoulders, lugging them across the seemingly endless sand dunes of southern Israel. After moving constantly across America as a youngster, now with his boots covered in wet sand and sweat trickling down his brow, Ari told me, “I finally felt at home.”

He completed his post high school year in Israel and headed back to the States to begin university. However, he soon realized that he could not shake his “Israel bug” and dropped out of school to make Aliyah and enlist as a paratrooper in the IDF, only afterwards completing his university degree in Jerusalem. With the memories of the inspiring nature of Napa in his mind and the feel of Israeli soil imprinted on his hands, Ari knew where his heart lay. “I wanted to mix technology and agriculture,” Ari described his first vision of making wine, “the idea of bottling all of that was really exciting to me.” Ari married and set off on what was supposed to be a two year “honeymoon” in Napa Valley. “It was a great opportunity for my wife to really get to know my family, and I enlisted in Napa Valley College to study viticulture and winemaking,” Ari explained.

Within no time, he was working beside some of the most well respected winemakers in in the world. Although two years turned into six, Ari was constantly building a bridge between Napa and Israel. He was always coming up with ways to implement the Napa concepts he was learning into Israeli winemaking, and he also started a company that imported Israeli wines that were unavailable in America to the refined Californian palate for tasting.

The first wine Ari made in Napa was while working as a cellar rat at Colgin Cellars. The winery had some extra juice they were going to be pouring down the drain, and Ari objected. “Don’t toss it, we’ll make some rosé out of that juice.” Along with his fellow cellar rat, Ari bought stainless steel tanks and set out to make some wine. “We decided to go to ‘The Rosé Guru,’ Jeff Morgan of Covenant Winery to get some impressions and advice,” Ari remembers, “and he really liked it.” Now, more than a decade later, Jeff started producing a series of wines in Israel and employs Ari as his co-winemaker.

While Ari was studying in Napa Valley, his old friend Elie Wurtman who owned a hi-tech company in Silicon Valley would stop in to visit him on his business trips to the area. “Over the years we must have visited close to two hundred wineries,” Ari recalls. Half serious, but also half joking, the two friends would constantly scheme of their dreams to one day start a winery together. Upon returning to Israel, Ari and Elie’s dreams turned into reality when they decided to establish “Bat Shlomo Winery.” 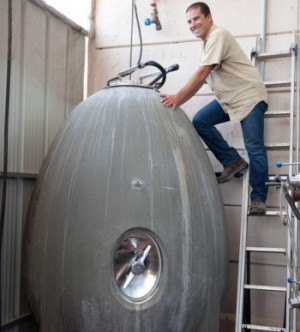 “Wine growing in Israel in very old school,” Ari complained, “the entire process is very outdated, from the plant material used to the bottling.” A lot of what Ari labors to produce at Bat Shlomo Winery is wine made with the most cutting edge methods and technologies. “I constantly feel like I am going against the stream, always having to push and reassure myself that I am doing the right thing,” Ari said frustrated. Whether in the vineyard or in the winery, Ari refuses to compromise his Napa learned ideals, no matter how difficult it is at times. His determination to raise the level of Israeli wine is inspiring; he is truly one of the greatest blessings the Israeli industry could hope for.

This wine is a perfect example of what makes Bat Shlomo one of the most innovative wineries in Israel. While most Sauvignion Blancs are made in stainless steel tanks, Ari brought over some Napa technology and fermented part of this wine in a concrete egg shaped tank, which encourages constant contact between all of the juice and the yeast in the tank. This unique method helps create a more balanced flavor and boosts the highly sought after mineral taste to the wine . This creatively crafted bottle is a lemon party that lasts so long it’s like the Willy Wonka Everlasting Gobstopper of white wine. The potent fruit of this wine is thrilling, and its earthy mouthfeel and flavors are exceptionally exciting. Bring this bottle to your last hurrah of the summer, parting with the endless bright sunny days while listening to The Beach Boys, “Pet Sounds,” or Danny O’keefe’s “American Roulette.”

About the Author
Born and raised in Chicago, Uri is now an Israeli farmer, living in Gush Etzion with his wife, Debbie and his daughter, Rakiya. When he is not farming, you can find him tasting wine with good food and even better company. Feel free to email me with any questions or comments you might have at: urirosenzweig@gmail.com
Related Topics
Related Posts
Uri Rosenzweig
Comments