Just days away from the opening of the 2012 Summer Olympics, controversy is already brewing. Turns out that in the spirit of the Olympic motto, “Faster, Higher, Stronger,” the BBC has decided to change its journalistic standards to “Lower, Dumber, and Jesus Christ, who wrote this crap?”

In case you missed it, the powers that Beeb decided that of the 200 nations profiled on their website, only Israel does not have a capital city. This came as a small surprise to approximately 800,000 residents of Jerusalem. It’s not that they listed the capital as “Shawarmatown” — they simply didn’t list it at all (although if you’re ever planning to visit, I’m all in — I hear the tehina is sublime).

Last I checked, the BBC is not a policy-making body. It exists to report the news, not make it. What if Sports Illustrated decided that Maccabi Tel Aviv won the World Cup? BBC, you can’t just make things up. Reporting that Lindsay Lohan took home an Oscar for her tear-jerking performance in “Schindler’s List” doesn’t make it so. If you write a story that Bar Refaeli and I were seen canoodling on Gordon Beach last night and expect people to believe it, think again. (Even though this did actually happen.) 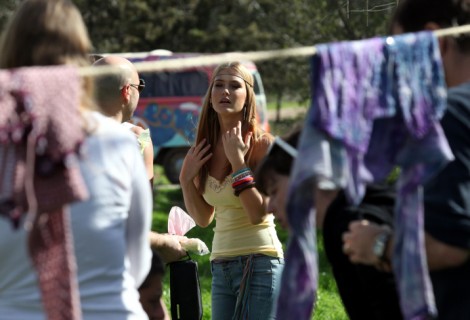 Alright, I lied. It happened in a lush meadow in broad daylight. (photo credit: Yossi Zamir/Flash 90

Journalism is a serious field where the best reporters pay their dues for years to climb to the top of their profession. So what in the hell is going on at the BBC? How did the people over there determine that Israel simply has no capital? Did they send a crack reporter here to search and he just couldn’t find it? Was he embedded in an alpaca farm in the desert?

Or could it be that they simply chose the wrong news sources? Is their Middle East informant Perez Hilton? Is their Deep Throat a four-year-old drunk kid in gan? Hey, BBC, when your source of information on Israeli geography is a card-carrying member of the al-Aqsa Martyrs Brigade, it’s probably time to re-examine your objectivity.

As a media outlet, you have a responsibility to report what is, not what you’d like. What if everyone reported what they wanted?

We interrupt this program to bring you a special news bulletin: After all-night negotiations with their lawyers and Donkey Kong, the remaining members of the Beatles have decided to reunite for a world tour in 2013. Paul McCartney and Ringo Starr will be joining forces with acclaimed musicians David Hasselhoff and Miss Piggy. 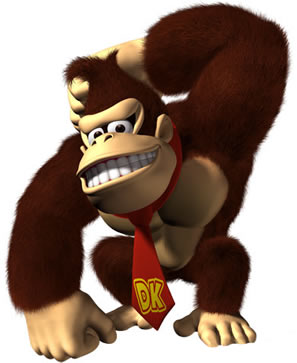 ‘Everybody’s got something to hide except for me and my Donkey.’

Responding to the uproar later last week, the BBC edited Israel’s profile on their site. Did it list Jerusalem as the capital of Israel? Of course not. It listed it as the “seat of government.” What the flying falafel does that even mean? Okay, BBC, as far as I’m concerned, the city of London is no longer hosting the Olympics. It’s hosting “the seat of track and field.” Have fun reprinting all your souvenir t-shirts.

Seriously, BBC, if you’re willing to list Jerusalem as the “seat of government,” is it such a stretch to simply write the word “capital?” You’re being stubborn over semantics? That’s like me going the distance with you and claiming that we didn’t have intercourse — I just inserted the seat of my penis.

And what does it even mean that you don’t recognize our capital? Are the British that poor at recognition? Can you imagine the BBC in Ikea? “What is that, a cabinet?” No, idiots, it’s an Ektorp chair cover. And how do your athletes expect to compete in the Games with such poor recognition skills? Your basketball team won’t be scoring much if the point guard is mistaking cotton candy for the hoop. 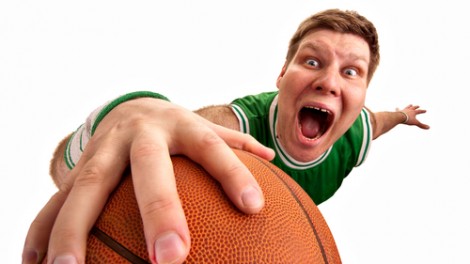 BBC, if you’re lying about something as fundamental as our capital, what kind of favorable coverage can we expect during the Games themselves? That the Israeli swimmer finished in ninth place out of five? That the Israeli sprinter clocked a time of 25 hours in the 100-meter dash? I look forward to learning that the Palestinian shot-put thrower was attacked by Israeli security with disproportionate force or that the Israeli team is occupying the Olympic village.

Fortunately, Mark Regev, spokesman for the Prime Minister’s Office, sent a letter to the BBC demanding that it correct the mistake. However, I have to question his choice of communication in a world where a message can be delivered faster than you can say “epic fail.” Mr. Regev, let me help you out. I’m pretty sure it doesn’t take over 140 characters to say “@BBC, f*** you, a-holes. #suckit.”

BBC, you disappoint me. You’re manufacturing news when you should be reporting it. You can’t just decide what another sovereign nation’s capital is. At least not unless you’re comfortable with someone else deciding yours. 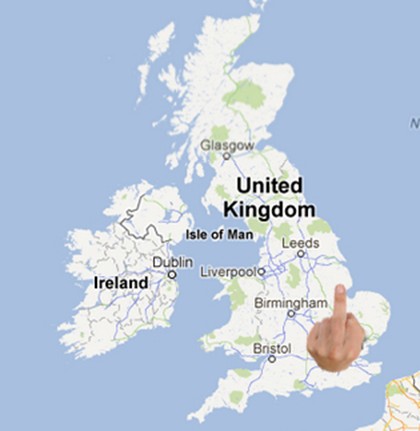 The capital of England is now Fingerhampton.

Post-script: The Times of Israel is reporting that Benji Lovitt just became the capital of the BBC’s mom.

Times of Israel blogger Matan Lurey sided with the BBC on this one. His post can be found here.