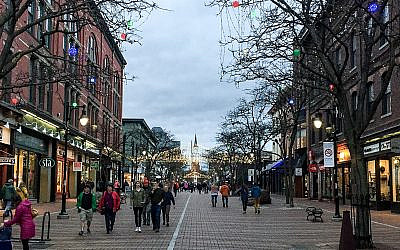 I’m one of those Christian supporters of Israel who’s a bit embarrassed by the way Christian Zionists deploy Genesis 12:3 to explain their support for Israel. You know the passage. It’s the verse in which God declares to the Israelites: “I will bless those that bless you and curse those that curse you.”

It seems a little self-serving to lay claim to a divine blessing for doing the right thing and standing with a nation-state that serves as the home for a people who have been scapegoated and murdered by their Christian neighbors since time immemorial.

Still, I can’t shake the feeling that the verse enunciates an elemental reality about the human condition: people and institutions that lambaste Jews and Israel are in the throes of a systemic failure that elicits a need for a distracting scapegoat l. History reveals that unchecked antisemitism is a prelude to self-implosion.

Other people have noticed this phenomenon as well and oftentimes argue that it’s the Israel-bashing and Jew-bashing that brings about the decline. I wonder, though, if it’s the decline that brings out their bashing.

Maybe we’re both right. Maybe the Israel-bashing and Jew-bashing is a consequence of failure and then once people and institutions give themselves over to these activities, they contribute to more failure and misery in a self-reinforcing downward spiral that ends in disaster if left unchecked.

You can see this spiral in action in the lives of individuals and institutions promoting anti-Zionism all the time. One so-called peace and justice activist, who traveled the world pointing out Israel’s sins to Evangelical Christians, was married to a pastor who sexually abused parishioners in the church the couple founded.

So much for “justice begins at home!”

And another Christian leader who promoted anti-Israel propaganda, portraying it as a faithful expression of the Christian faith, left his wife — and mother of his children — for another woman.

So much for covenant fidelity!

On a group level, it’s axiomatic that the churches that support BDS are losing members at an alarming rate. They are dying even as they claim that God is “doing a new thing” through them.

Maybe in all this, God is doing what He has always done — knocking the legs out from under people and institutions that go astray by using the Jewish people and their institutions as a scapegoat to distract from their own failings.

There is a right way to live, and antisemitism is not it.

The relationship between Israel-bashing and Jew-bashing, on the one hand, and societal decline, on the other, has been on display in Burlington, Vermont over the past few weeks.

On Sept. 13, 2021, the Burlington City Council was harangued for hours by anti-Israel extremists who wanted the city to endorse a BDS resolution put on the agenda by one of the councilors. The resolution condemned Israel for attacking Hamas in the Gaza Strip in May, but didn’t even mention the rocket attacks that preceded Israel’s response. It also called on the Jewish state to dismantle the West Bank security barrier, without, of course, even mentioning the suicide attacks that prompted its construction. The folks who advocated for the resolution targeted Israel with all sorts of defamatory lies that portrayed the Jewish state as a monstrous and genocidal nation in the Middle East. A lot of the supporters of the resolution were members of the local chapter of the Democratic Socialists of America. The local chapter of the AFL-CIO expressed support for the resolution as well.

Predictably enough, proponents of the resolution portrayed Israel as the paragon of evil in the world.

“The same cops that murder and brutalize protesters in America are trained by the IDF in Israel,” one protester said. “The walls used to divide and oppress the indigenous peoples […] here in America are replicated in Israel. The murderous imperialism that led the U.S. to kill millions in Afghanistan and Iraq is the very basis of the Israeli state…”

After about two hours of such testimony, the City Council voted to withdraw the resolution from its agenda. Judging from the statements made by its supporters on the council, it will likely be resubmitted in a different form in the next few months.

While the lies — and efforts to refute them — dominated the proceedings, there was an undercurrent of testimony about a growing problem of lawlessness in the city. It’s a sensitive issue. In 2020, the City Council proposed to impose a 30 percent reduction in the number of police officers on the city’s police force, reducing the number of officers from 105 to 74 through attrition.

One speaker said that if City Councilors were to look at online discussions about life in Burlington, they would see what is really going in the city.

“Crime is an issue,” she said. “Wherever you stand in terms of more or less policing, we have a crime problem. We have a substance abuse problem. We have a speeding problem. It’s really scary out there how few traffic stops I’ve seen and how fast people are driving because there are no police to enforce speeding violations. We have a graffiti problem. The metaphorical broken windows are here and it’s terrifying to see the city go into that state. And now, you’re adding antisemitism to this list. I urge you to vote no on this resolution. Focus on the issues that matter to people.”

Another speaker told the council that in 2016 there were 24 violent assaults in Burlington and that, in the first eight-plus months of 2021, there were 40 assaults.

“These are very serious assaults with great bodily injury,” she said, before telling the council that “Gunfire incidents are up six times the norm in Burlington.”

Testimony of urban decay in Burlington was even more evident at the next City Council meeting on Sept. 27, 2021. Once again, attendees expressed alarm about increased crime, a lack of police officers, and people overdosing and defecating on the streets of the city.

I kid you not.

Kelly Devine, executive director of the Burlington Business Association, argued in favor of more police funding: “We are losing officers at a rapid pace. I came upon on an overdose victim in the middle of the day last week and I have to say there was somebody there to respond because this young man would not have survived that day without the help of the Burlington Police Department.”

Another attendee, a recent transplant from New York, said that in the first five months he has lived in the city, he has noticed a deterioration in the quality of life in Burlington.

“In the morning, when I get The New York Times delivered, frequently, there’s just a homeless person sleeping in the doorway,” he said, before adding that he’s also noticed “people taking a crap on the sidewalk” in front of a local business. “I don’t see the policemen around as much as I did even in New York. I think you got a wonderful city. The unbelievable courtesy that you have here should be preserved. I like it here. Please keep it good. Keep it going up, not down.”

Another attendee told the council that she had moved into the city three years as a college student.

The woman said that Burlington was a beautiful city and had so much when she first moved. Not anymore.

“It’s a waste to see what it’s going on now and it’s really unfortunate that a student like myself does not even feel safe, feels the same anxiety in this room talking about it that I do going to my car at night.”

Yet another attendee, a 20-plus year resident of Burlington, told the councilors that he had “noticed a decline in the quality of life in the city for many years. He said he didn’t really know much about the opioid crisis until a month ago, when he was walking into a parking garage in the city.

“I saw a man who I thought had passed out and when I tried to touch him, he jumped up and said, ‘Do you like to watch people shooting heroin?’ and he had a needle in his hand.”

The same speaker reported that soon after the frightening episode, his car had been broken into in the same parking garage by breaking the window with a rock. They stole his backpack, his wife’s backpack, and a chainsaw.

“We call [the police] and we don’t get a response,” he said. “We just don’t know what to do. But what we do know is that we have people dealing drugs and shooting heroin outside our door. You can walk over to the park in the morning. My son’s 18-year-old girlfriend came up from North Carolina. And she’s having to step over dirty needles when she’s walking the dog.”

“I’ve come out and found feces in our doorway,” he said.

A city whose leaders can’t maintain order, keep clean streets, or protect its citizens from chaos was, just a few weeks ago, the scene of anti-Israel incitement where protesters chanted for Israel’s destruction and falsely accused the Jewish state of ethnic cleansing and genocide.

It just goes to show that whether you believe in God or not, the reality expressed in Genesis 12:3 is undeniable.

Jew-bashing is a sign of disorder in the house.