There was a lot to boo about this past Sunday.  I am not referring to the lackluster Super Bowl game in Atlanta, but rather the shameful boycott, divestment and sanctions (BDS) protest against the Israel Philharmonic Orchestra (IPO) in front of Carnegie Hall.

The IPO annual gala took place on February 3 to raise money for the legendary orchestra with a brunch and concert performance. As attendees entered the concert hall, they were jeered by BDS proponents calling for a cultural boycott of the Jewish state.

IPO was partly created as a refuge for Jewish musicians facing boycotts and imminent death during the rise of Nazi Germany. It’s founder, Bronislav Huberman — a Polish violin virtuoso and child prodigy who had performed countless concerts all over the world — found work scarce on the continent as the cloud of Jew hatred spread over Europe.

He fled to the then British Mandate where he envisaged an orchestra as a rescue operation for musicians persecuted by the Nazis, as well as a contribution to Jewish cultural life in the young city of Tel Aviv. 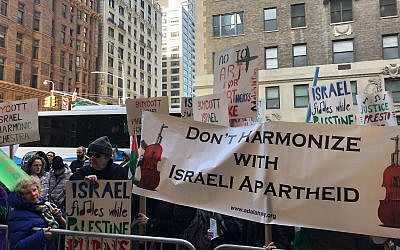 Huberman raised money to bring other musicians who had been fired from European orchestras to the Jewish homeland ultimately saving 1000 lives from what would have been certain death in the concentration camps of Austria, Germany, Poland and Hungary.

How telling it is that Jewish musicians are attacked today with hateful slander and appeals for a boycott as in they were in the 1930s. Protest chants of “From the river to the sea, Palestine will be free!” are thinly veiled calls for Israel’s destruction.  And lest anyone misinterpret their intentions, BDS supporters put a fine point on it a few years back when they sang “Shoot the Jew!” during a performance by an Israeli jazz musician in South Africa.

Gala attendees were not spared this past Sunday either. The protest organizers galvanized attendance by describing the fundraiser as both “lavish” and “outrageously expensive,” relying on standard antisemitic tropes about Jews and money.

The recent IPO boycott rally was organized by Abdalah-NY, but similar ones against other Jewish national treasures such as the Batsheva dance company and the Jerusalem Quartet are a constant in the international music scene.

A different time, and some different places, but the rallying cry remains the same.  The world looks away at its peril.