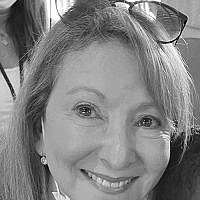 The Blogs
Iris Kraemer
Apply for a Blog
Advertisement
Please note that the posts on The Blogs are contributed by third parties. The opinions, facts and any media content in them are presented solely by the authors, and neither The Times of Israel nor its partners assume any responsibility for them. Please contact us in case of abuse. In case of abuse,
Report this post.

During the last week of the counting of the Omer – the seven weeks between the holidays of Passover and Shavuot – I arrived in Ethiopia with a delegation of Jewish leaders to be part of a different type of counting. It was the latest chapter in the Israeli government’s approval of 3,000 Ethiopian community members with Jewish roots to make Aliyah to Israel, for the purpose of reuniting with relatives from whom they have been separated for 10 to 20 years.

Our group of 70 professional and lay leaders included Rachel Hoffer, Board Chair of The Jewish Agency for Israel-North American Council (JAFINA), as well as representatives from The Jewish Agency, The Jewish Federations of North America (JFNA), Keren Hayesod and the World Zionist Organization (WZO). We accompanied the first group of 180 Ethiopian olim (immigrants) to Israel as part of last month’s continuation of Operation Zur Israel (Operation Rock of Israel), which was initially launched in December 2020.

We did not merely “see ourselves as if we were making an Exodus,” as we do at our Passover Seders each year. Rather, we all became part of history. On the day prior to this Aliyah flight, we visited members of the group of then-prospective immigrants at The Jewish Agency’s offices in Gondar, Ethiopia. We saw Ethiopians of all ages, sitting beside rows of luggage packed and ready for the journey they had been anticipating for years. In fact, their community has maintained Jewish traditions for thousands of years despite the adversity that they have faced in Ethiopia.

We also visited the homes where many still wait their turn to make Aliyah. They live in extreme poverty, with families of six sharing a room and six families sharing a toilet, which is not much more than a hole in the ground.

Nutritional supplements are provided to malnourished children up to age 5, nursing mothers, and pregnant women. The author Paolo Coelho said, “The heart doesn’t feel what the eye doesn’t see.” Together, our group saw, and together, we felt the essential need to leave no one behind.

Earlier in the week, we stood on a spot overlooking the mountains between Ethiopia and Sudan and listened to the stories of Sigal Kanatopsky, The Jewish Agency’s Regional Director to the Northeast US, and Liat Damoza, Jewish Agency Missions Coordinator. They made the journey as young children, given only a moment’s notice, walking by night and hiding during the day for weeks. Many were barefoot. Over 4,000 people died on the way. Those who survived the trip would wait six months in a refugee camp before being flown to Israel in the middle of the night.

Micha Feldman, son of Holocaust survivors and formerly The Jewish Agency’s main Shaliach (Israeli emissary) in Ethiopia, shared his experiences as one of the architects of Operation Solomon, which brought more than 14,000 Ethiopian Jews to Israel in 24 hours in 1991. “Abba Micha,” as community members call him, has dedicated most of his life to helping Ethiopian olim and considers them “the true Zionists” because they overcame adversity in steadfastly maintaining the hope – across generations – of one day living in Israel.

Finally, on a chartered flight from Addis Ababa to Tel Aviv on June 1, we flew alongside 180 members of the community and had the privilege of seeing their dreams come true. They now spend two and a half years in absorption centers, learning Hebrew, completing conversions in accordance with Jewish law, and fully integrating into Israeli society. Amira Ahronoviz, CEO and Director General of The Jewish Agency, accompanied us at an absorption center in Beersheva, where we met young Ethiopian olim from prior Aliyah operations who have made remarkable progress learning English, Hebrew, and the life skills necessary to help their older family members acclimate. Amira shared that five more absorption centers will be built, adding to the 13 that are already operating throughout Israel, to accommodate the groups of Ethiopian immigrants who are scheduled to arrive in the next six months.

For every challenge that the Jewish people face, the global Jewish family responds. Through the collective responsibility of The Jewish Agency, JFNA, Keren Hayesod and WZO, we continue to be the children of Israel – the people we became when we stood together at Sinai.

Every one of us, together… on this journey.

About the Author
Iris Kraemer of Jacksonville, Florida, is a member of The Jewish Agency for Israel-North American Council (JAFINA) Board of Advisors.
Related Topics
Related Posts