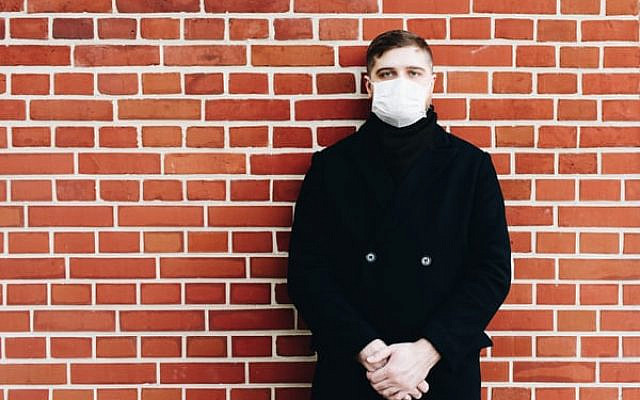 Passing through Krakow airport on my return from an education trip to Auschwitz, there was a sight that I found particularly unsettling.  I remember staring at a group of Chinese tourists wearing masks. Having just learned that we were the last group to leave Birkenau as it was forced to close due to Covid,  I looked at these masked tourists and couldn’t help but wonder if perhaps this was where we were heading.

Four months on and now more than 30 countries have mandated face coverings for their nationals. We join them today in England as from Friday July 24th it is law for people to wear face coverings in shops, shopping centers and supermarkets.

What could be termed as “the greatest cover up in history” has serious implications. No longer will we be able to look at people in the face, to read their expressions and to relate to the emotions they express, I have no doubt that it will create an even greater social disconnect than the one we are already enduring.

It is striking that that this unwelcome development occurs in the period of the nine days, a period of national mourning over all the tragedies that have befallen our people in exile. From the destruction of our two Holy Temples in Jerusalem, through the pogroms, the crusades Tach V’tat and of course the Holocaust to name just a few. There is not a corner of this earth where at some point we have not been persecuted and suffered. But this particular “tragedy” is not being suffered by the Jewish people alone this time.

Tisha B’Av every year predictably evokes the story of Kamtza and Bar-Kamtza, two men with similar names who were involved in events which are said to have brought about the destruction of the Temple, which is the catastrophe commemorated by Tisha B’Av.

Rabbi Yochanan informs us in the Talmud that it was the incident of Kamtza and Bar Kamtza (Gittin 54b-55a) which caused the destruction of Jerusalem during the Roman period.

A brief outline of the incident is as follows:  An anonymous individual threw a lavish party in Jerusalem to which his enemy Bar Kamtza was mistakenly invited instead of his friend Kamtza.  The host became enraged when he discovered Bar Kamtza’s presence and was implacable as he had Bar Kamtza publicly ejected from the party.  Bar Kamtzah was angry, especially at the Rabbis who were present at the party and failed to stop the host from publicly humiliating him.  Bar Kamtzah desired revenge against all the Jews of Jerusalem.

Bar Kamtzah thus travelled to inform the Roman Emperor that the Jews were planning a rebellion.  The Emperor did not believe him and created a test to see if this was true.  He gave Bar Kamtza a kosher and healthy animal to deliver to the Temple authorities in Jerusalem and requested that it be sacrificed on his behalf.  Unbeknown to the Emperor, Bar Kamtza blemished the animal’s upper lip; some suggest the blemish he made was a cataract   rendering the animal unfit to be offered.   The Rabbis eventually concluded not to sacrifice the unfit animal, this led to the Romans concluding that the Jews were rebelling and set in place the eventual destruction of the temple and exile from Israel.

Underlying this tragic story is a tremendous degree of enmity and hatred.  The “Ben Ish Chai,” pointed out that the Talmud purposely identifies what initially appears to be an episode of minor importance as the cause for the destruction. Unlike the sins that led to the first Temple’s destruction, groundless hatred often involves a kind of low-key offense that the average person would not deem a major transgression.  This Talmud attempts to educate us to take the minor slights and squabbles seriously.

The Maharal of Prague suggests a fascinating reading of this passage’s introductory sentence. Taken literally, it says that Kamtza and Bar Kamtza caused the destruction.  Maharal thus asks, how could Kamtza be faulted for this sequence of events, when he was not even present at the party?  Maharal suggests that in an atmosphere of great hatred, people look for friends as allies in their disputes with their many enemies.  Such a friendship reflects not true human warmth, but rather the calculating partnership of the hostile.  If so, even the host’s friendship with Kamtza was part of the corruption that characterized the Jewish society of the time.

As with any Talmudic tale, we should ask whether the story’s details are simply historical facts or have symbolic import. It is suggested that the locations of the blemish clearly belong to the latter category.  Blemished lips represent the terrible speech of the Jewish people prior to the destruction of the Second Temple. Slander, insults and mean-spiritedness dominated the society’s discourse; the animal’s blemish thus reflects the blemished lips of a people.  The blemished eye suggests the pettiness with which they looked at each other.  This pettiness features prominently in the decision to throw someone out of a party even after he had offered to help foot the bill.

Our Sages make an astounding assertion “Any generation in which the Temple is not built, it is as if it had been destroyed in their times” (Yerushalmi, Yoma 1a). The same lack of merit resulting in its destruction has resulted in its not being rebuilt.

Often, it is only when something is threatened or lost that we can begin to truly have a deep appreciation for its preciousness. The face masks that we are now legally obliged to wear, impinge on our ability to speak and communicate face to face with those around us. It is perhaps a stark reminder, as the blemish in the lip was a painful reminder to our people at the time of the destruction of the Temple.

The gift of speech is unique to humankind, it is something that should be utilised to unite and connect us rather than divide and cause enmity between us. We should use this period of obligatory face covering to reflect and consider carefully on our interactions and communications with those around us and ensure they are of the highest calibre.