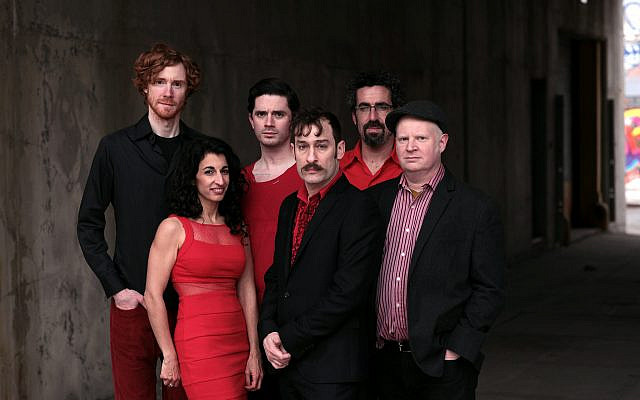 They haven’t put out a record since 2014’s highly successful, ‘Tanz’ (Corasón Digital), they have undergone multiple personnel changes and the band, who is just becoming old enough to drink, has to constantly undergo a dusting just to stay shiny; all this and yet, the legendary klezmer-rock band, Golem, is still very much alive. When not suffering along with everyone else through the coronavirus pandemic, they have been busy with a recent streaming performance in an auditorium at the Museum of Jewish Heritage in Battery Park, and have roles in two large-budget streaming shows. In February, they appeared in ‘episode six’ of Amazon Prime’s series, ‘Hunters’. And they appeared in a Netflix production called, ‘Dash and Lily’, which just hit the streaming service in November.

Despite the recent successes on-screen, the band’s spokesperson claims, unfortunately, the negatives slightly outweigh the positives these days. “The lockdowns are devastating for performing artists. Our last show with an audience was on Purim, March 9th. Our only time performing since then was November 15th without an audience. I hope we can get back to performing someday,” said band founder and co-leader, Annette Ezekiel Kogan. The latter performance she is referring to was taped live on-stage at Edmond J. Safra Hall at the Museum of Jewish Heritage—A Living Memorial to the Holocaust. For the concert, they came out on-stage, in keeping with their tradition, wearing matching red outfits and singing their unique brand of hard-rocking klezmer in Yiddish and English.

As far as projects on the horizon, it is hard to see what is ahead for Golem. “[We are] waiting for the pandemic to end. It’s hard to make plans when you don’t know what will happen,” said Kogan. The challenging year that is coming to a close has been a shame, because, while December will come and go, finding most musicians and performers, kind of depressed, Golem started the year off on a high-note, making a cameo in Amazon Prime’s ‘Hunters’ starring Al Pacino, (as mentioned) and the young Logan Lerman, as “Jonah Heidelbaum”. If only the pandemic didn’t hit New York City in March and make everybody miserable. ‘Hunters’ is based in New York City in 1977, and focuses on a cadre of Nazi hunters—inspired, loosely by real-life characters—who spy and fight and flashback to the trauma of Nazi concentration camps while they spy and fight. In ‘episode six’, the band comes in at about 43:30, performing ‘Hava Nagila’ at a wedding. It is an uplifting and wholesome scene, despite the morose and violent tenor of the show. The party-goers at the wedding appear in the center of the screen dancing the ‘Hora’ along to a masterful klezmer romp by the band who tucks in their punk-rock tail for the performance. The episode is dubbed, ‘(Ruth 1:16)’.

For Netflix’s ‘Dash and Lily’, Golem shot a “Hanukah party club scene on Halloween 2019, ” said the group’s spokesperson, Kogan, who explained that “the show is popular now, I think, because everyone is yearning for a time when things were normal, pre-Covid.” ‘Dash and Lily’, which originally hit the streaming service on November 10, is meant to be a romcom. It is a Holidays story and takes place in Manhattan. Kogan talked about the song selection the producers of the show made, which resurrected an old hit tune of Golem’s from ‘Tanz’ (2014). “The producers of the show chose to use our original song, ‘7:40’, which they called ‘an anthem of Jewish angst’,” she explained, “The lyrics are based on the true story of a Jewish guy who emigrated from the Soviet Union to America, where he is finally free to be an Orthodox Jew (hence the refrain of the three daily prayer services ‘shaharit, mincha, maariv’)”, she continued, “The protagonist talks about his experiences in the USSR, [where] wearing a ‘star of David’ was a crime, not being admitted into medical school, beating someone up after being called a ‘kike’…” She explained, “Netflix said they could not put the word ‘kike’ in the show. First we looked for other words to substitute but nothing really worked, so we (together with the producers) decided just to pause where that word should be, and the listeners can imagine whatever they want.” In the original track of the song off the studio record, the nasty word is blurted out freely, as it was on-stage November 15, at the performance at the Holocaust Museum in Battery Park.  The verse continues, after the violently disparaging word is uttered in the song, “I stick my finger in his eye…” The protagonist of the song refuses to get pushed around by his pugnacious gentile bullies, and he fights back, or so lead singer, Aaron Diskin, sings.

“The storyline of ‘Dash and Lily’ is that two actors in the episode are part of the band—so we actually had the actor re-record the vocal track of the song,” explained Kogan. “Nick Blaemire, an actor in film and Broadway and a singer, did a great job. At the end of the song, the protagonist can finally wear a ‘kippah on his head’ and ‘daven as he likes.’ The song is called ‘7:40’ because the middle section is the melody from a very famous Russian-Jewish song called 7:40.”

Kogan told the story how she became an accordion player, “I grew up doing ballet and Ukrainian dance. For Ukrainian dance class, we always had accordion accompaniment and I loved the sound of it. Also, I played the piano, so it seemed like it would be easy to learn.” Golem’s music is inspired by Polish and Russian klezmer, New York City-punk and rock ‘n roll. They always manage to sound angry, even when playing a lighter tune. The songs are anxious and frantic, sour, with a dash of ironic comedy. Annette Ezekiel Kogan talked about what a band must endure, in order to stay together for so long: “There have been some personnel changes in the band, but we have had the same six members for about eight years now, so we are really like a family,” she said. “Musically, we started out only playing our versions of Yiddish songs and klezmer music. We were a band that re-interpreted that music and brought it back to life. As the years went on, we started doing more and more original music and lyrics dealing with the more contemporary Jewish experience.” The band is Kogan on accordion and vocals; Aaron Diskin on vocals; Jeremy Brown on violin; Curtis Hasslebring on trombone; Taylor Bergren-Chrisman on bass; and Tim Monaghan on drums.

Career highlights for the group have been some legendary and holy performances at private wedding receptions, a couple of recordings on the short-lived but legendary, Jdub Records (2006’s Fresh Off Boat and 2009’s Citizen Boris), Matisyahu’s one-time recording label; and performing a mock Jewish wedding in Alphabet City, lower Manhattan, based on a Yiddish kitsch tradition which used to take place in the Catskills, as an end-of-summer, Labor Day Weekend celebration. The event, which took place in June of 2005, was written-up in The New York Times. The reporter who covered the story wrote of Kogan, her talents and her tastes, “Drawing on old recordings and music discovered on her travels, Ms. Ezekiel collects tunes and then, with her band mates, tweaks the traditional strains of Yiddish, Balkan, Slavic and Gypsy music into something only vaguely evoking their origin.”

Growing anti-Semitism in America is something that Golem experiences with the rest of the country’s Jewry. Annette Ezekiel Kogan explained  how she uses her stardom to speak out against anti-Semitism and to fight hate. “I think that Jew-hatred and anti-Israel sentiment has increased in the last ten years in America,” she said, “It is Hanukah now, and we must remember the Maccabees and never give up fighting against these things. That fight has been a theme of our music since the beginning, and we won’t stop.”

One goal of Golem’s, for after when pandemic restrictions lift, is to finally play Israel, which they still have never had the opportunity to do. “[E]veryone asks us why we haven’t played there yet…No one can come up with the money to bring us there….” said Kogan. However, despite having never musically graced Zion, the band has played in “France, Germany, Poland, Ukraine, Mexico and all over the United States.”