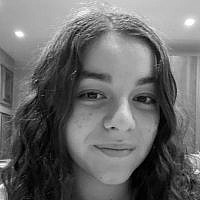 The Blogs
Lea Thomas
Apply for a Blog
Advertisement
Please note that the posts on The Blogs are contributed by third parties. The opinions, facts and any media content in them are presented solely by the authors, and neither The Times of Israel nor its partners assume any responsibility for them. Please contact us in case of abuse. In case of abuse,
Report this post.

In seventh grade, I switched from a small, Jewish community school to an all-girls Episcopalian school. My Jewish bubble turned into going to Chapel daily and having no school on Easter. I got used to needing to ask my teachers what work I would have to make up when I missed school for the High Holidays. Overall, I got used to being one of the seven Jewish students in my grade. Seventh grade, the year of bat mitzvahs, our grade was first introduced to a critical part of Judaism. But instead of conversations being, “That speech she gave was really interesting,” they turned into, “Wow, I had a lot of fun at that party.” I, being only 12 years old, didn’t really understand that this mindset was harmful.

Fast forward to sophomore year (tenth grade), I was signed up to attend Tichon Ramah Yerushalayim (TRY) for my second semester of sophomore year. Unfortunately, Israel closed its borders attempting to try and halt the spread of COVID-19. Even though we were delayed by two months, we still began forming friendships. I ended up visiting my new friends in Philadelphia. We took some cool pictures, and I decided to post them on Instagram with the caption, “lol still not in Israel.” From this, I received multiple comments that were along the lines of, “free Palestine.” I decided to reach out to one of these people just wanting to know why this comment was warranted. Nowhere did I share my beliefs on the political system in Israel. I ended up having a heated conversation with a student from a local school that gave way to a few too many antisemitic messages. Soon after, we left for Israel.

In May of 2021, I heard a rocket siren for the first time. For residents of Jerusalem, this was not a frequent occurrence, but as we later learned, a rocket was fired towards Jerusalem. As a teenager in the 21st century, social media is an outlet for the majority of us. But, instead of posts being made about the violence normal people were being subjected to, posts were insinuating that the Jewish people were at fault. Surprisingly, these teens actually believed what they saw on these posts and would immediately repost them. I received a direct message from a recently made Instagram account (that I linked to the person mentioned before) asking me to defend Israel as a whole. Why should I, a Jewish teenager, be at fault for an entire country’s political choices? That certainly doesn’t happen to Americans when the American government does something controversial. As more students from my school began posting and spreading inaccurate information, I decided that I wanted to speak out, as someone that was in the middle of it all. I hosted a virtual presentation from my Israeli dorm room to my school in America. I would consider this presentation to have gone very well; however, my classmates still said things like, “Lea, I feel so bad that school made you do that.” This was not even close to true. I should not be told that I should be embarrassed for standing up for what I believe in.

Junior year, I decided to get more involved in the Jewish community. I joined my BBYO (B’nai B’rith Youth Organization) chapter board and became a co-leader of JSA (Jewish Student Alliance) in my school. I began to notice more occurrences in school that were borderline antisemitic. We were learning about the Crusades in French class when my teacher played a YouTube video that claimed Israel is occupying Jerusalem. “Jew Jokes” became more frequent and normalized around school. And the final straw, the seventh graders at my school did a project on Anne Frank’s Diary where they made a collage of things they would bring if they had to go into hiding. A collage that included the Christian Bible, energy drinks, and Lululemon shorts. The school Instagram posted (and ultimately deleted) this project on Instagram, essentially advertising this to the community. Nothing was said afterward, even when the projects remained displayed on the wall. I, along with a few other Jewish students, decided to lead a JSA meeting to talk about what we were experiencing around the school and this event in particular. As the Jewish students of school came together, I realized that I am not the only Jewish student who worries about how our non-Jewish peers are educated regarding the Holocaust. Even scarier, I realized that we had all had something antisemitic happen to us, whether around school or in the community.

Some of the antisemitic incidents we listed during the JSA meeting included: teachers using the term “grammar Nazi,” students making fun of the school lunch when it was Shakshuka and Couscous, the normalization of “Jew Jokes”, Holocaust Jokes, and countless more.

In December, in advance of the Christmas season, the school Chaplin asked us, as JSA, to give a speech during Chapel about Chanukah. My first thought was, “Yes! I would love to educate the student body about something Jewish related.” But as I kept thinking, I wondered why we weren’t asked to talk about Rosh Hashanah or a holiday with a more significant value from the Torah. Instead, we were asked to speak on a holiday that has been so Christianized, students and faculty thought that the equivalence of the importance of Chanukah was to Christmas.

On the Wednesday following the hostage situation at Beth Israel Synagogue in Colleyville, Texas, I co-led a conversation that was open to the entire upper school to discuss this event. We had approximately twenty students come, ten being Jewish. To put this into context, our upper school has around 250 students. Sure, some people had prior engagements, but a majority of the school was just hanging out or on their phones. The conversation went really well, but I was still disappointed in the lack of support from my fellow peers. After many suggestions from this talk, JSA is going to be doing more events that are open to the entire school.

As Jewish students, we shouldn’t need to lead or initiate every Jewish-related conversation. As I was waiting to make an announcement in Chapel regarding the conversation we were hosting, our Head of School asked us what we were doing. After we told him, he responded by saying something like, “I am so glad someone decided to say something.” I immediately wondered why he didn’t say anything, being that he has the platform to speak up.

As I was wondering how to conclude this post, I wanted to give some hope. At the end of our JSA conversation relating to the hostage situation, a few non-Jewish students came up to my co-leader and me and asked what they could do to help. This simple gesture made me realize that even though the whole school didn’t come to support us, the few people that did truly want to make the world a better place for everyone. I think we can take the simple question of, “What can I do to help?” to heart. Sure, the world has many people who stir up hatred, but sometimes we need to focus on the small moments of care and compassion that make the world a place.