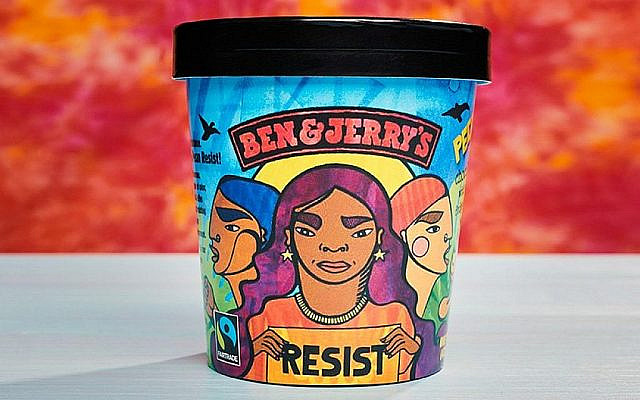 Preparing dessert in our house has long meant opening the freezer and grabbing a pint of Ben & Jerry’s ice cream. Along with 2% milk, eggs and Munster cheese, Cherry Garcia is a staple in our icebox. Frankly, both Ben and Jerry have soothed me through this pandemic. I unfortunately now have the waistline to prove it.

But in my state of New Jersey, the contents of our freezer might soon turn into contraband. New Jersey is one of more than 30 states that in recent years passed anti-BDS legislation, laws that exclude companies from state government contracts and pension funds if they choose to boycott Israel. But the laws in New Jersey as well as New York, and Illinois are even more specific. They ban state agencies from contracting with companies that refuse to do business with Israel or with “territories controlled by Israel.”

So, when Ben & Jerry’s announced last week that it will end its sales of ice cream in those territories captured by Israel in the 1967 war, Jewish advocates including American Jewish Committee wrote to state lawmakers urging them to invoke their divestment statutes.

BDS, or the Boycott, Divestment, Sanctions movement, has become a peaceful proxy for the Israeli-Palestinian conflict here in America and in Europe. I say peaceful because as we saw in May, some people took their positions on the conflict to the streets, unleashing their vitriol on anyone they thought might be Jewish. BDS provides a seemingly more civil strategy for singling out Israel.

Part of the deal struck 20 years ago when Ben & Jerry’s was acquired by the British company Unilever was that the Vermont-based ice cream maker would be allowed to operate with more autonomy than other subsidiaries. An independent board makes decisions about its social mission, brand integrity and policies. After all, social justice and progressive causes have long been part of Ben & Jerry’s brand. They expressed support for the Black Lives Matter movement and LGBTQ+ rights. Founders Ben Cohen and Jerry Greenfield also have expressed support for Israel and its neighbors.

Which is why the decision illustrates how and why many well-meaning social justice activists support the BDS movement — they ignore the movement’s overall mission. Frustrated with settlements in the West Bank and the constant strife with Gaza, many activists with the best of intentions embrace BDS because they want to halt the settlements. But for BDS, that’s just a means to an end. The movement ultimately seeks to eliminate Israel.

Their founding documents spell it out. They condemn self-determination for the Jewish people in the biblical land of Israel. The B.D.S. National Committee’s members include the Council of National and Islamic Forces in Palestine, which includes Hamas, Palestinian Islamic Jihad and the Popular Front for the Liberation of Palestine — all terrorist groups.

During the conflict, Ben & Jerry’s was silent on social media – for two months, nothing but crickets. When they did finally bow to pressure and break that silence a couple of weeks ago, they announced their decision to end sales in the territories controlled by Israel, saying selling ice cream there was “inconsistent with our values.”

But here’s the thing. Israeli settlers can simply drive across the green line and buy a pint. It’s not so easy for Palestinians whose leadership rewards the families of terrorists who cross that line and commit murder. For Israel to protects its citizens, all Palestinians entering Israel – regardless of their purpose – now must pass through security checkpoints constructed during the Second Intifada to curb the flow of suicide bombers into the Jewish state.

Moreover, in 2015 the company began pouring hundreds of thousands of dollars into sustainably sourcing almonds from a Palestinian farmer cooperative.

“Our linked prosperity model offers a way to create benefits for these communities such as investing in local farmers and the manufacturer in the region,” the company’s director of social impact said at the time.

What will those farmers do now?

Regardless of their position, Ben & Jerry’s should speak up civilly and constructively about what they believe. But they didn’t. They stayed silent for two months then unveiled this grand symbolic gesture to satisfy angry appetites. But the decision accomplishes nothing but churn emotions and deny Palestinians a taste.

It also makes ice cream — one of the comfort foods I enjoyed a little too much during this pandemic — more divisive and frankly a little less delicious.

An abbreviated version of this piece originally aired on People of the Pod, a podcast about global affairs through a Jewish lens by American Jewish Committee. In the same episode, the author interviewed Jewish Insider reporter Gabby Deutch about a troubling challenge facing Jewish authors. Listen here.