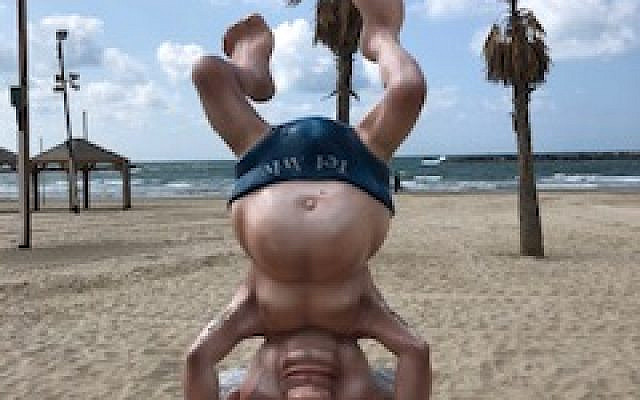 The few days I spent walking the miles-long Tel Aviv beach promenade in February, before the plague, gave me the paradoxical gift of being entirely alone among mobs of people.  Unencumbered by friendship, family, or professional obligations, I paid attention to the silent fixtures of the landscape I would otherwise ignore in more sociable times.

Above this essay, I’ve posted pictures of two of those fixtures.The first is a statue of David Ben Gurion, Israel’s revered founding prime minister, doing one of his famous headstands.  An Israeli guide I know told me that Ben Gurion suffered from back pain and immobility all his life.  Moshe Feldenkrais, inventor of the Feldenkrais method of somatic education, became Ben Gurion’s personal trainer and showed him how to do the head stand yoga pose that Ben Gurion used for his back problems.  The statue is based upon a 1957 photo taken by the photographer, Paul Goldman, at the moment the prime minister was standing on his head right there on the beach.

The second is a statue by the Israeli-born artist, Zadok ben David, entitled “Beyond The Limits.”  Even a casual glance at Ben David’s work on-line reveals his penchant for creating striking, multi-textured steel pieces for outdoor viewing.  As readers can see, Ben David’s “Beyond The Limits” features a monkey standing on its head on what appears to be a wire extending from a strange, ovular object that could be anything…a closed beach umbrella, a uterus, a cacao pod.

“Beyond The Limits” and “Ben Gurion Standing On His Head” stand no more than an 1/8 mile away from each other on the promenade off the beach in Tel Aviv.  I have not found out why the Tel Aviv municipality placed Ben David’s strange sculpture where it did. I would love to hear more from historians of the city about this.  My likely not too original surmisal is that the monkey standing on its head is a satirical commentary on the head-standing prime minister. I’ve considered the almost shocking similarity of the two sculptures:  two very active and apparently intelligent primates are standing on their heads, an act of agility that is neither natural to, nor very smart, of either one; such an act is, in fact, beyond the limits of what we would reasonably expect of them, since it could easily get them injured, if not killed, whether on a high wire or on the ground.

Admittedly, I have no basis in fact to make this assertion.  It is entirely possible that Ben Gurion and the monkey stand near each other because they are two cool sculptures that needed a home along  the heart of Tel Aviv’s busiest, brightest strip. However, part of me doesn’t buy that argument.  The proximity and satirical echoes of the two works just feel too close to be accidental.   Because I am in the business of doing “midrash” – active interpretation – of contemporary cultural artifacts and symbols, I want to pursue this line of satirical analysis.  What is the juxtaposition of the two sculptures possibly trying to say?

Perhaps this is biographical and historical commentary?  His own outsized reputation notwithstanding, Ben Gurion was a mere mortal, full of the same frailties and stupidities as his “less evolved” countrymen.  We owe BG a great debt of gratitude, for obviously, without his daring decision to spurn the warnings of the international community and declare Israel a state, Israel might not be here today.  Certainly, he had the vision to push beyond the limits of conventional political wisdom and radically alter the course of Jewish and world history.  Yet was he also blind to the lasting power of religious fundamentalism in particular, and religious commitment in general, when he formulated status quo agreements during his time as prime minister?   He believed that this Judaism of the diaspora ghettos was on its way to the grave and that the new Jews of modern Zionism would take Jewish history to its logical end.  How have his assumptions worked out for the State of Israel and for the Jewish people?

Perhaps this is general political commentary?  Left to their own devices, political leaders will, (pardon the pun), stand on their heads to boost their own images, avoid blame for their mistakes, and become venerated, larger-than-life figures who can do no wrong in the eyes of a blindly adoring public.  The placement of Ben David’s monkey so near Ben Gurion’s head stand demonstrates the power of art, literature and journalism to do what they do best in a free society:  poke deadly serious fun at people in power, even and especially the ones with legendary reputations.

Perhaps this is existential and moral commentary?  All self- congratulation aside, we humans have not evolved very far beyond our primate cousins.  We believe we’re so damn smart, pushing our intelligence and ambitions beyond the limits, until our boundary breaking behavior, too often motivated by bad impulses, gets us into the worst trouble.  We think we’re Springsteen, who famously sang about “walking out on the wire”, on our heads no less.  We wind up more like Curious George, way in over our heads and in desperate need of some dude in fishing boots and a yellow hat to pull us out of danger.

All three of my interpretations rely upon memory – individual and collective – as a tool for critical thinking and honest, fearless examination of human life, human power and its practitioners in particular.  We know how easily memory can be distorted by powerful people to incite hatred in the masses.  The satirical near-juxtaposition of Ben Gurion and the monkey sends the opposite message:  we must remember that the practitioners of power are not gods, they are not always right, they do not always have our best interests in mind; most important, their leadership decisions are often not bold steps beyond the limits of conventionality, but ridiculous and dangerous head stands by people whose heads are too often in their behinds.

This vital use of memory to speak truth to power is at the heart of self-expression by artists like Zadok Ben David.  They thrive in democracies because free and critically thinking self-expression are one important reason that democracies exist.  Our leaders of free thought and expression  also demand that we remember how easily self-expression can be immolated in the firestorms lit up by populist excess and political manipulation.  They insist that we never forget how difficult and important it is for us to hold our leaders’ feet to the fire at all times, under all circumstances.  Anything less than this is just standing on one’s head hoping for political winds to change while the powers that be monkey around with our freedom.  That would go, truly and inexcusably, beyond the limits.