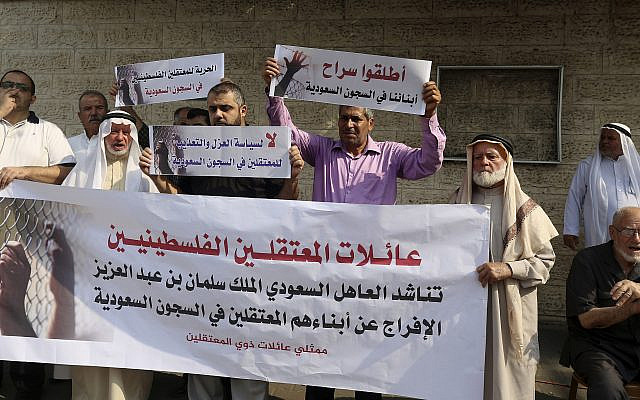 Families of Palestinians held in jails in Saudi Arabia protest in front of the International Committee of the Red Cross office in Gaza, on October 16, 2019, accusing the Saudis of serving Israel by imprisoning Hamas members. Placards read, 'Release our sons in Saudi prisons,' and 'No to the policy of isolation and torture for the prisoners in Saudi jails.' (AP Photo/Adel Hana)

The astonishing article in The Times of Israel by a Saudi, Abd-al-Hamid al-Ghabin, points to potential cataclysmic changes in the Middle East.

The Saudi writer and analyst spoke in an open, positive and transformative way about many of the issues that reflected the fundamental hostility of the Arab world toward the Jewish state for decades: Israel’s legitimacy, the historic connection of the Jewish people to the land of Israel, the impact of the Palestinian issue on the region, the issue of Jerusalem.

One should not get too excited about this. It is, after all, an article by an individual, not a fundamental change in policy. It is true, however, that such a piece could never have appeared even as late as five years ago and reflects evolving dynamics on the ground as well as in rhetoric.

It reminds us of how the theme of threats and opportunities for Israel has turned around almost 180 degrees from the early days of the state.

When Israel defeated the Arab states in Israel’s War of Independence, the Arab world turned to economic boycott and diplomatic isolation of the Jewish state.

He reassured his people that, in fact, Israel was not as isolated in the region as some assumed. He developed his “theory of the periphery,” which posited that there are three states on the margins of the region who by not being Arab and having different interests, shared commonalities with the state of Israel.

Those three states were Iran under the Shah, Turkey with its secular government and Ethiopia under Haile Selassie. And so in those early years Israel pursued relations with all three and derived strategic, economic and political benefits from those relations. Equally important were the psychological advantages for the Israeli people to know that there were those in the region who could live and deal with Israelis unlike their Arab neighbors, even if much of the interactions were sub rosa.

Fast forward to today’s Middle East. Israel, of course, is in a very different place with a strong economy, strong military and relations throughout the world. In the region itself, the trend is in the opposite direction from the days of Ben Gurion.

The opportunities lie with the Arabs.

Israelis are meeting with Gulf leaders on a regular basis and it is an open secret that Israel is more and more being seen as a strategic ally rather than an enemy in the face of the growing Iranian challenge. None of which is to say that hateful rhetoric has disappeared, or anti-Israel votes at the UN have vanished, or that the Palestinian issue has simply gone away or that countries like Qatar no longer fund Hamas.

Larger forces, however, are at work in the region which offer opportunities for relations, which would have been unheard of until recently. These opportunities can involve sharing of intelligence, the benefit to the Gulf states of Israeli strikes against Iranian forces in Lebanon or the movement toward a more balance approach toward Israel in the rhetoric of the Gulf states.

At the same time, ironically enough, today the greatest strategic challenges that Israel faces comes from two of those peripheral states that had once given Ben Gurion such hope.

Since the Iranian revolution in 1979, the Islamic Republic has become Israel’s number one nemesis. Whether it is Iran’s building of a nuclear weapon, its expanding into Lebanon, Syria, Yemen and Iraq, its use of terrorism against the Jewish people or in its rhetoric delegitimizing Israel, Iran dominates Israel’s strategic challenges.

And Turkey under Muslim Brotherhood leader Recep Tayyip Erdogan, which still has relations with Israel, has on many levels become the second most hostile state in the region toward Israel. Its backing of Hamas, its call to bring Israel to the International Criminal Court for “crimes against humanity,” its referring to Israel as a terrorist state, and in general its use of vicious anti-Israel statements and actions has no match these days with the exception of the Islamic republic of Iran.

This is a reminder that history takes many different paths and that change, both good and bad, can come as a reaction to one’s own policies, the internal dynamics of other societies and regional upheavals.

Ultimately, the greatest catalyst for change in the region was the Iranian revolution and the many dramatic consequences of the expansionist presence of an expanding Islamic Republic.

By Iran’s various actions — building a nuclear weapon, fashioning its surrogate of Hezbollah in Lebanon, supporting Hamas in Gaza, and expanding its military infrastructure in Syria in order to build a land bridge to the Mediterranean — it is seeking to convert its peripheral status versus Israel into a front line one.

All such steps have also led Iran to become the number one adversary to the Gulf countries and especially to Saudi Arabia – generating more and more interest and need for the Gulf States to turn to Israel as a potential powerful ally in the region facing the Iranian menace together.

Ben Gurion never would have guessed it.