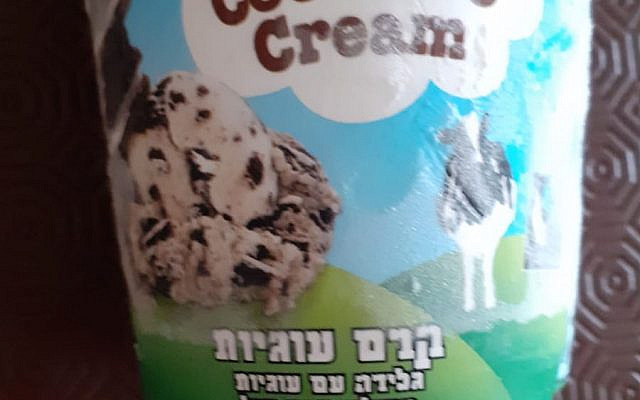 Ben & Jerry’s cofounder Ben Cohen has made an entire line of Bernie Sanders-inspired ice cream in honor of the Vermont senator’s 2020 presidential campaign.

“Bernie’s Yearning,” a play on mint chocolate chip was released in 2016. The Sanders’ campaign’s latest flavor, “Bernie’s Back” is the newest limited-edition flavor Cohen has released through his private label Ben’s Best.

The ice cream was only available through a contest on the senator’s campaign website. Entries were accepted through August 9, and only 40 pints were awarded.

Though Cohen’s tweet suggests that Jerry Greenfield, with whom he founded Ben & Jerry’s, may have helped make the ice cream, Ben & Jerry’s says it is not affiliated with the duo’s namesake brand.

Perhaps the company, Ben & Jerry’s, does not endorse political candidates, but the founders themselves are open and unanimous about who they support.

CBSN political reporter Caitlin Huey-Burns spoke with Ben Cohen and Jerry Greenfield, founders of “Ben & Jerry’s” in early February at a campaign event in Manchester. They talked about why they believe Sanders can beat Donald Trump.

In 1978, with a $5 correspondence course in ice cream-making from Penn State and  a $12,000 investment ($4,000 of it borrowed), Ben and Jerry open their first  ice cream scoop shop in a renovated gas station in Burlington, Vermont.

In 1981, the same year Bernie Sanders began his term as mayor, the first franchised scoop shop opened in Shelburne, Vermont.

Free Ben & Jerry’s ice cream at Sander’s first victory party led to formal endorsements of his 1989 congressional bid. Greenfield and Cohen mailed thousands of letters to Vermont residents, declaring the independent politician had the “strongest record” of anyone running.

American online magazine ISRAEL21c deserves much credit for uncovering the following story with regard to Ben & Jerry’s Israeli operation. I have taken a sampling of points made by author Naama Barak.

The only independent makers of the all-time favorite outside of Vermont give the lowdown on churning out ice cream Israel-style.

ISRAEL21c paid a visit to Ben & Jerry’s Israeli factory to hear all about blue-and-white ice cream, learn of our fellow countrymen’s soft-serve habits, and sample a scoop or two. It was a tough job, but someone had to do it.

Driving up to the factory in the dusty industrial area of Kiryat Malachi in southern Israel, it’s hard to imagine this is where the magic is created. But created it is – some 80,000 pints of it a day, to be precise.

We catch up with Ben & Jerry’s Israel CEO and founder Avi Zinger to get the lowdown.

Hi Avi. So, how did you get to setting up an all-Israeli Ben & Jerry’s factory?

I established the company 31 years ago. I lived in the States for 13 years, and before I came back I was looking for something to bring over here, something special that couldn’t be found.

I love ice cream, which is the most important thing. And I used to ski in Vermont – I lived in New York – and always when I arrived in Vermont Ben & Jerry’s was the pride of the locals. They were just starting out.

And I said walla. There was no really quality ice cream in Israel back then. And people would always say to me, how is it that in Israel, where it’s hot and all that, there’s no really good ice cream. So I said “Wow, if I could only bring this ice cream to Israel.”

I flew out to Vermont, met with Ben at this studio apartment and we talked.

Once the ice cream hit Israel, how was it received?

At first people didn’t really relate to it, because they were used to ice cream with vegetable oils, with chemicals, or pareve [dairy-free], which is horrific. Suddenly you give them ice cream; it’s a shock at the beginning.

How do Israeli tastes differ from American ones?

The favorite flavor here is Cookies & Cream, which across the world does okay, but it’s never a big deal.

One of Ben & Jerry’s most iconic flavors, Cherry Garcia, which is in the top 10 for years. Not a week goes by without someone saying to me, “Avi, how come you don’t make Cherry Garcia in Israel?”

I also love that flavor. We tried bringing it over at least five times. People [in Israel] don’t like it; people think it’s bitter. So Israelis’ tastes are changing, improving and becoming more global, but some things just don’t work out.

Israel is a world-renowned vegan powerhouse. How does that translate into the ice cream world?

When we brought it to Israel it was hysterical, just hysterical.

It’s not only vegans; it’s also people who are allergic to milk, to eggs. For the first time they could eat something that is natural, that’s quality, that comes in a range of flavors. It simply created hysteria here – we were shocked by the response.

What are the implications of manufacturing the Ben & Jerry’s brand? How do you keep in sync with Vermont?

It has to do with a few things. There’s the product itself, which is the flavors. The flavor is not just the flavor, it’s the ingredients and the suppliers.

We, to be Ben & Jerry’s, need for the ice cream to be 100 percent natural, to have the best ingredients and so on… the ingredients also need to be non-GMO and fair trade.

Furthermore, there’s the brand, keeping in line with the brand’s values. This means taking care of the visibility, of the values, of Ben & Jerry’s social mission. We’re very strict about it.

And you’re the only completely independent Ben & Jerry’s manufacturers outside of Vermont, right?

But why manufacture in Israel, and not ship over from Vermont?

First of all, when I started out, Ben & Jerry’s were just about manufacturing in the States. They weren’t even thinking, or were able to think, about exporting.

There’s also the issue of kashrut, of Chalav Israel [a particular type of kashrut for milk products].

What do you think are the ice cream trends for the years to come?

Then there’s the issue of sugar-free, which isn’t working out – although there’s constant demand – because Ben & Jerry’s want it to be 100 percent natural and there are no suitable substitutes.

Defining the Social Mission appearing in the above interview

Our Social Mission compels us to use our Company in innovative ways to make the world a better place.

To operate the Company in a way that actively recognizes the central role that business plays in society by initiating innovative ways to improve the quality of life locally, nationally and internationally.

Wasteful Military Spending?, Does Not Apply To Israel!!!!

It’s a big mystery why Ben & Jerry’s considers military spending wasteful. And I want to specifically focus on Israel.

As has been illustrated this past week, Israel has again been attacked without justification. Israel is dealing with an enemy that is refusing to come to the table and negotiate.

Israel’s greatest mistake would be to reduce military spending. And hence the military aid received from the US is very necessary to support its war efforts against many enemies here in the Middle East.

Israel has tried since its Independence to make peace with its enemies, and to no avail. Rockets, missiles, terrorist attacks to name a few, all are taking place on a regular basis in an effort to destroy Israel.

If the enemy if refusing to seek a lasting peace, then Israel must continue to defend itself every and any way possible.

The strong support that the Ben & Jerry Founders have created for Bernie Sanders does not translate well for Israel or Jews.

Bernie Sanders is also supported by three of four Congresswomen who are all anti-Semitic. These Congresswomen are against Israel and Jews.

Quite simply put, a friend of Bernie Sanders is no friend of Israel or Jews.

With Omar, Tlaib and AOC backing Bernie, this is most definitely a losing combination.

Hopefully Ben & Jerry’s founders will get the message ASAP.