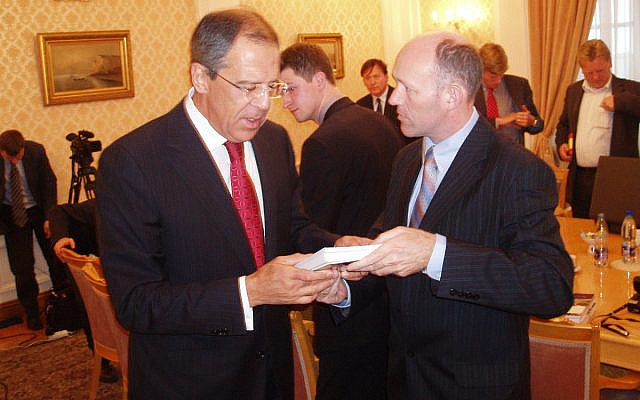 The antisemitic remarks of Russia’s Foreign Minister Sergei Lavrov have revealed the real face of Russia. It has also marked the failure of Bennett’s appeasing policy towards Russia. After being the pariah among Western democracies supporting Ukraine, Israel can make it up by building up Ukraine’s armed forces to gain a heavily armed neutral status similar to that of the Jewish state.

Russia has a large legacy of antisemitism, under the Russian empire and under the Soviet Union. The czars took Jewish boys to serve for decades in the Russian empire to deprive them from a Jewish life. Furthermore, they forced the Jews to life in a specific area of the empire. The antireligious communist regime of the Soviet Union oppressed Jews and prevented them from making Aliyah. Pogroms, the killing of Jews at random, has always been a characteristic of Russia. With this background, the antisemitic statements of Sergei Lavrov are nothing new. But his antisemitic revelations fit it with other statements of this evil, autocratic regime: didn’t Putin say many times that he was not going to invade Ukraine? Didn’t Putin and his gang deny the atrocities in Bucha and elsewhere, allegedly fabricated by Kiev, until satellite images confirmed them? That is the real face of a Russian regime that oppresses its own population and attacks a neighbouring state – Ukraine – which formed no threat at all against Russia. And with that regime of Putin Israeli Prime Minister Bennett sought to follow an appeasing policy…

As an Israeli citizen I felt ashamed to see that Bennett for some 2 months didn’t want to make any statement against Russia’s aggression towards Ukraine. By doing so, he positioned Israel aside from European, North-American and other democratic states that condemned Putin’s war against Ukraine, and delivered huge amounts of weapons to support Kiev. Foreign Minister Lapid was the only Israeli minister to consistently slam Russia. At the time Bennett, allegedly a religious Jew, found it necessary to desecrate Shabbat to fly to Moscow to meet Putin. There was no justification for this Shabbos desecration; the situation in Ukraine was the same before and after Shabbat. The only reason to do so was because Putin’s agenda was free on Shabbat to meet Bennett. But by flying to Moscow, the orthodox Israeli Prime Minister also made his entourage (flight crew, security detail, advisors, etc.) desecrate Shabbat. Not a good show for a person who claims to be religious.

Bennett justified his appeasing policy towards Putin by the deconfliction mechanism between Israel and Russia. Israel informs the Russian forces in Syria when it intends to conduct air strikes on Iranian targets in Syria, in order that Russia’s air defence does not shoot down Israeli aircraft. However, that is a weak justification for not condemning Russia. The Russian air defence system in Syria is not meant against the Syrian resistance against Assad; they don’t have any aircraft. It is deployed against Israeli or American air strikes. Until now Russia has observed this deconfliction mechanism, because it serves its purposes, but that can change by tomorrow. Lying and cheating are features of Putin’s regime. Hence, as I warned before – Prime Minister Bennett should acknowledge that Russia is not a friend of Israel. Russia cooperates not only with Syria, but also with Iran, Israel’s main enemy. However, if the Russians should change their policy and launch their air defence against Israeli aircraft, it does not take much for IDF to wipe out the limited Russian air defence contingent in Syria.

It is time to change for Israel. Lavrov’s antisemitic remarks should mark a definitive change of policy of Israel towards Russia. Ukraine’s President Zelensky, assuming that NATO will probably never allow Kiev membership of this security alliance, has stated that he is aiming for a neutral status. Not neutral as Switzerland but neutral as Israel; that is with a strong, modernized army that will deter Russia from invading again. After its wrong policy of not choosing sides in the Russian-Ukrainian conflict, Israel can now correct itself by supporting Ukraine’s armed forces. Currently, by delivering to Kiev arms and equipment, which Zelensky has repeatedly asked for to Israel, but in vain. After Russia’s aggression against Ukraine has ended, Israel, and IDF in particular, could be very beneficial to Kiev in constructing forceful and sophisticated armed forces. IDF is the most experienced Western army and the State of Israel has been surrounded by enemies since its first day of independence. Hence, militarily and politically, Israel can make a huge contribution to Ukraine’s security. With such a policy change by Israel, Zelensky will surely forgive Bennett for his initial wrong policy choice.