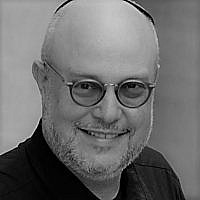 The Blogs
Kenneth Bamberger
Apply for a Blog
Advertisement
Please note that the posts on The Blogs are contributed by third parties. The opinions, facts and any media content in them are presented solely by the authors, and neither The Times of Israel nor its partners assume any responsibility for them. Please contact us in case of abuse. In case of abuse,
Report this post.

As the faculty co-director of UC Berkeley’s Israel Studies Program, Israel is frequently on my mind.

Yet when I began a recently-completed sabbatical in Israel, I didn’t expect to encounter Berkeley so frequently in my Israeli life. I found unexpected ties between Berkeley and Israel just about everywhere, stretching deep into the past, and pointing towards the future.

A few short blocks from our family’s sabbatical home in the northern town of Zichron Yaakov stands the historic home (now a museum) of Aaron Aaronsohn, the celebrated botanist who laid the foundations for Israeli agriculture. Aaronsohn was first to realize that California would be a primary source for the agricultural knowledge key to future of the Israeli economy. David Fairchild, Aaronsohn’s contemporary at the US Department of Agriculture, would remark that “his knowledge of California almost equaled his knowledge of Palestine.”

In 1909, Fairchild arranged for Aaronsohn to visit UC Berkeley, then the leading site for the study of agronomy and botany. After Aaronsohn spent two days walking the Berkeley Hills with Dean Eugene Hilgard, whose retirement two year before had left the College of Agriculture leaderless, Aaronsohn was offered the position. In the end, Aaronsohn turned it down and returned to Ottoman Palestine, where he first founded a center in the coastal town of Atlit geared to developing domestic agriculture (funded by a group including Louis D. Brandeis, Felix Frankfurter, and Judah Magnes), and then, with his sister Sara, founded the famous NILI spy ring to help the British in battling for Palestine against the Turks.

The agricultural connection continued in strength. A 1946 Hebrew song (available here) points to Berkeley’s role in training the next generation of agronomists working to make the land bloom:

“If you want to study some agriculture,” it goes, “Its an easy thing.”

Maybe you want to be an agronomist,

so get yourself over to the Berkeley college.

The college of Berkeley, California.

Today, David Zilberman, an Israeli by birth who is a leader in both US and Israeli water and environment efforts, holds the university’s Robinson Chair in the Department of Agricultural and Resource Economics, after chairing the department twice.

The Berkeley connection, however, is not just historic.

During my time in Israel, I connected with dozens of our current students participating in a range of programs and academic opportunities. I also spent time getting to know Berkeley alums from Israel’s top to its bottom, learning about their important impact on the country.

In the north, Berkeley alum Ron Robin (PhD ’86), Haifa University’s new president, has articulated an exciting vision for transforming the region by leveraging his institution’s academic excellence to grow the path to middle class success. In Jerusalem, Professor Shai Lavi (PhD ’01) was recently appointed to head the Van Leer Institute, a major think-tank on Israeli Civil Society. Dov Greenbaum (JD ’07) runs the Meitar Institute for Legal Implications of Emerging Technologies at the Interdisciplinary Center in Herzliya, which helps identify and address the cutting-edge issues that will fuel Israel’s high-tech economy in the future. In the Negev, Omri Yadlin (JSD ‘94), president of Sapir College in Sderot, leads the most important economic agent in the region, with significant successes serving both Jewish and Bedouin communities of the south.

I hosted a Cal reunion in Tel Aviv, and met Berkeley alumni who teach on university faculties across Israel, lead hi-tech and venture capital firms, and negotiate foreign relations with Israel’s neighbors. And I often began the day by reading posts from Cal grad Sarah Tuttle-Singer ’06, who, as new media editor for the English-language Times of Israel, spearheaded the effort that has brought the site over a million Facebook likes.

My sabbatical also offered the opportunity to build connections for the future, lay the groundwork for ongoing Berkeley-Israel student partnerships, and connect with leading scholars, journalists, diplomats, jurists and community leaders — many of whom I arranged to come to Berkeley this year to work with students and present a diverse range of programs.

This year, we’re hosting six (six!) visiting professors from Israel, teaching a dozen courses on Israeli constitutional law, the Israeli Supreme Court, and Israeli politics, sociology, and medicine, in six different departments. Visiting Professor Rami Zeedan, an expert on Arab-Israeli politics and society, will teach the program’s first course on that subject, as well as on mid-east politics more generally.

Our efforts to take future academic connections to a deeper level have not gone unnoticed in Israel. The leadership position of UC Berkeley’s Israel Studies Program was recognized by the announcement that, this coming summer, we will host the 2018 annual conference of the Association for Israel Studies — the international gathering of those who study and teach about Israel from across the globe.

So, as Israeli students sang, more than 70 years ago,

Get yourself over to the Berkeley college.

The college at Berkeley, California

About the Author
Kenneth A. Bamberger is the Rosalinde and Arthur Gilbert Foundation Professor of Law at the University of California, Berkeley, co-director of the Institute of Jewish Law and Israel Studies at UC Berkeley, and co-director of the Berkeley Center for Law and Technology. He recently completed a sabbatical in Israel.
Related Topics
Related Posts
Comments