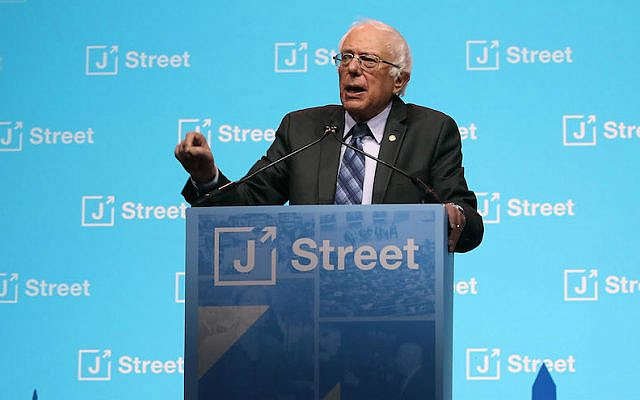 It is clear that for all of his good intentions, Democratic presidential candidate Bernie Sanders doesn’t know what’s actually happening on the ground in Israel. Senator Sanders’s campaign is run on a progressive-idealistic platform. Values direct Bernie’s policies, and rarely do facts, statistics or budgets interfere. While this can sometimes seem shortsighted, for progressives tired of the government putting their values second, Bernie’s message resonates. “Progressive values first” extends to Sanders’s approach to foreign policy as well, especially when it comes to the Israeli-Palestinian conflict. Sanders frequently talks about treating both Israelis and Palestinians fairly. He believes the United States hasn’t paid sufficient attention to Palestinian needs in the past and allowed unjust, even abusive, Israeli policies to harm Palestinians.

In a recent CNN Town Hall Sanders said, “What American foreign policy has got to be about in the Middle East, is bringing the Israelis and bringing the Palestinians together under the banner of justice. It cannot just simply be that we’re just pro Israel and we ignore the needs of the Palestinian people.” Notice how Sanders prioritizes justice and omits the more frequently mentioned peace and security. For Sanders and his followers, the value of justice comes first, peace and security are secondary. While justice is an important value, it’s naive to think that either side will sacrifice their security for justice.

In his speech to the J-street conference, Senator Sanders suggested taking some American military aid and giving it to the people of Gaza to alleviate the supposed humanitarian crisis going on in Gaza. Sanders said, “I would say that some of the $3.8 billion should go right now to humanitarian aid in Gaza.” There is a legitimate question to be raised about whether or not there really is a humanitarian crisis in Gaza. I’ve never been to Gaza and I can’t say for sure. I have read two different narratives both with sufficient evidence to support each claim. Gaza is the same size as Brooklyn with half the amount of people and Brooklyn is definitively not overcrowded. There is no disputing that there are people in Gaza suffering without sufficient food and medicine.

Israel’s critics frequently blame the suffering in Gaza on Israel. They point to Israel’s closed border and naval blockade of Gaza and claim that they prevent the people in Gaza from improving their conditions. Israel’s legitimate security concerns of Gazan Palestinian terrorism is rarely, if ever, mentioned. The critics also ignore that Israel left Gaza over ten years ago and that Gaza is run by the Hamas terrorist organization.

Sander’s suggestion of taking American aid to Israel and giving to the people of Gaza is classic Utopian naïveté. Foreign aid funneled into Gaza more often than not ends up in the hands of Hamas and is used to build terror tunnels rockets and stage attacks against innocent Israelis.

Voters will make their own choice about who to vote for on Super Tuesday. When considering voting for Senator Sanders they must take into account his ignorance of facts and lack of understanding the role of pragmatism in foreign policy. America has seen its presidents lose the respect of the international community, but no president would lose the world’s respect faster than a naive president who makes impractical demands of America’s allies. Voters beware!