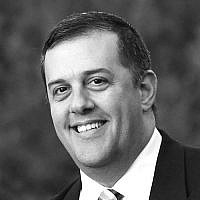 The Blogs
Yehuda Poch
Apply for a Blog
Please note that the posts on The Blogs are contributed by third parties. The opinions, facts and any media content in them are presented solely by the authors, and neither The Times of Israel nor its partners assume any responsibility for them. Please contact us in case of abuse. In case of abuse,
Report this post.

Upon close consideration of Trump’s new Vision for Peace, there is a huge amount to like about it.  First, and least importantly, it is bringing out the true colors of the Israeli left.  “Peace Now” condemned the plan, which just goes to show that, despite their name, they are not interested at all in peace – only in opposing any claim that the Jewish nation has to the Land of Israel, and ultimately in destroying the country.  The Labor-Meretz party also condemned the plan, which shows that, despite their decades of policy, Labor is nothing more than Meretz, and that both are interested not in peace but in weakening Israel.  If they continue to stridently oppose the plan, both parties combined may find themselves outside the Knesset come March 3, which would basically eliminate the Israeli left from serious Israeli politics.

On the right, there is also opposition, which comes mainly from two groups.  One is comprised of some of the people who live in Judea and Samaria – by no means all of them.  There are serious arguments to be made against the plan from those residents, and those arguments deserve to be heard and addressed in a serious manner.  The second is from those on the right who refuse on principle to consider anything that holds out even the tiniest potential for an Arab state within the Land of Israel.  Their opposition is understandable, given the historical and Biblical Jewish claim to all of the Land of Israel.  But they completely miss the point of this plan.  In a certain way, so do the more serious opponents among the residents of Judea and Samaria.

The point of the plan is something that can only be seen between the lines.  Despite what his political opponents may claim, Donald Trump is no idiot.  Neither is anyone among his “peace team”. He and they knew exactly what they were doing.

To lay the groundwork for this deal, Trump began by drawing moderate Arab countries closer to the US, pulling out of the Iran deal, and encouraging those Arab countries to develop closer ties with Israel.  These three elements happened in tandem, and provided background for his next moves.

Then he recognized Israel’s sovereignty over all of Jerusalem.  That was enough to drive Abu Mazen away from any contact with, or acknowledgment of, the United States.  Given the warmer relations President Trump had already fostered between the US and the wealthy Arab moderates, and between them and Israel, this served to isolate Abu Mazen internationally.  His only real allies now are pariah states.  Trump’s third move was to move the US embassy to Jerusalem.  This reinforced the results of his earlier recognition of Jerusalem.  In between all this, Trump passed the Taylor Force Act through Congress, cutting funding to the PA by the amount that the PA pays terrorists.  This further alienated Abu Mazen from Trump.

These moves combined to accomplish two things.  First, they guaranteed that Abu Mazen would completely reject the deal, including all the things promised to him if he accepts it.  Second, they guaranteed that the rest of the Arab world would remain more or less ambivalent about the situation.  And by presenting the plan as advantageous to the Arab residents of Judea and Samaria, by offering them a massive economic windfall, political and diplomatic support, and practical assistance on the ground in building a Palestinian state, President Trump drew Russia and Europe in to support the plan as well.

That’s where the genius of this plan lies.  Abu Mazen’s public rejection of the deal does not really matter in terms of what Israel gets out of the deal.  The result is that Trump has essentially created a situation in which Israel can formally annex large swaths of Judea and Samaria, including every single Jewish community there.  That annexation will have American backing, and at least tacitly, it will also have the backing of Russia, the European Union and its member states, and even the moderate and wealthy Arab countries.  This plan essentially erases the current “Green Line”, and redraws it in a way far more favorable to Israel.  Much like the settlement enterprise until now, it creates facts on the ground in Israel’s favor, and it does so with the approval (tacit or active) of virtually all of the world powers.  It also paints Abu Mazen into a corner as a rejectionist while the entire rest of the world, including much of the Arab world, lines up to support Trump’s plan and a much stronger Israeli presence in Judea and Samaria.

While this is largely “between the lines” it is not hard to discern for those who are prepared to move beyond their well-worn stances.  But there is yet one level more.

When the Jewish nation first came into the Land of Israel under Yehoshua, their conquest of the land was neither immediate nor automatic.  It took 21 years and wars against 11 kings before it was deemed complete enough for the soldiers from the tribes of Reuven, Gad, and half of Menashe to return to their homes.  And even then, the Jewish nation had to contend with the Philistines and Amalek for centuries more.  What we learn from this is that the Jewish home in the Land of Israel grows to accommodate its Jewish population.

In our own times we see this as well.  From tiny farming communities, Israel grew into a country that was split into three distinct parts under the 1947 partition plan.  By 1949, it had grown into one contiguous territory.  In 1967 it grew again with the addition of the Golan Heights and the start of settlement in Judea and Samaria.  Now it is growing again.  It will still not be perfect, but the incremental growth is definitely a step in the right direction.  That it is being done this time with almost full international backing – unlike in 1949, 1967, and 1981 – is nothing short of miraculous.

For those on the right who view the State of Israel in the Land of Israel as our national salvation (ראשית צמיחת גאולתנו), pay very close attention to those words.  It is the beginning of the GROWTH of our salvation.  Like our original home in the Land of Israel, the modern State of Israel was not meant to be established on all the land in one swift move.  Rather, it is meant to GROW into the land.  In my view, this is a major step in that growth, and in bringing Mashiach one massive step closer.

About the Author
Yehuda Poch is a writer and translator living in Israel. He has previously worked as a journalist and as a communications specialist in the nonprofit sector.
Related Topics
Related Posts
Comments