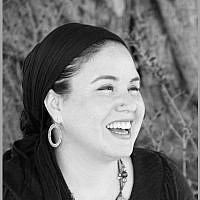 The Blogs
Tamar Weissman
Apply for a Blog
Advertisement
Please note that the posts on The Blogs are contributed by third parties. The opinions, facts and any media content in them are presented solely by the authors, and neither The Times of Israel nor its partners assume any responsibility for them. Please contact us in case of abuse. In case of abuse,
Report this post. 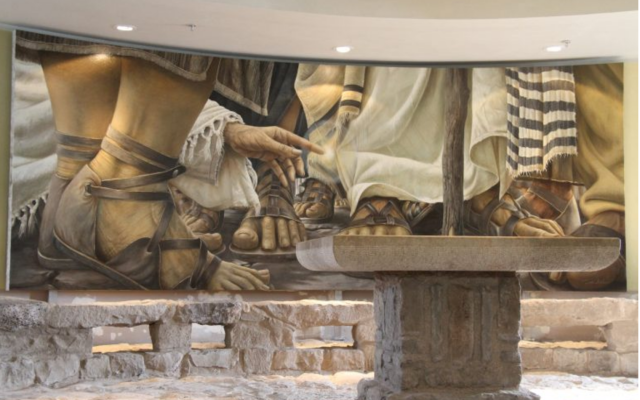 Subtle painting that lines one wall of the chapel at Magdala. (courtesy)

Something is very wrong at Magdala, and we should all be aware of it.

I had spent the day happily exploring Second Temple era sites in the Lower Galilee: Sichin, Ruma, Kana — all thriving little hamlets in the first century CE. The final stop was Magdala, the current jewel in the crown of a touring itinerary built around Galilean sites of interest for aficionados of that ancient period. My visit there left me terribly unsettled, and quite reluctant to introduce other Jews to the site in its current state.

First, some background: the village of Magdala (“Migdal” in rabbinic literature) is better known to Christians than to Jews as the birthplace of Mary Magdalene. Anyone who has read Dan Brown’s The Da Vinci Code might be convinced that this Mary was Jesus’ wife, but a more conservative position would have her an admirer or friend to the rabbi. Regardless, Migdal was a Galilean fishing village on the eastern bank of the Kinneret, at the foot of Mt. Arbel, just a few kilometers north of Tiberias. It is mentioned a few times in the Talmud, but it is clearly of special interest to the Christian community.

Let’s remember that every place Jesus may have visited during his lifetime in the Galilee was a Jewish Second Temple era village or city. He may have encountered Roman soldiers, officials, or other gentiles in these wanderings, but the realia of the Galilean context of his day was entirely Jewish. Kana was a Jewish village (and the wedding he attended there, where he is said to have turned water into wine, was a Jewish one). His hometown of Nazareth was a Jewish village, as was Migdal.

The site currently identified as ancient Migdal was, until recently, prime beachfront property, privately owned by a Jewish Israeli from the nearby town of Migdal. He ran an Israeli vacation hub called Hawaii Beach there for decades (think of all the disco dancing to bad ’70s music, right on top of ancient Migdal!). Tourism flagged in the wake of the Second Intifada, so the bankrupt landowner sold the land to Father Juan Solana, a Mexican Catholic priest, who knew the area to be in the general region of ancient Migdal and sought to develop a spiritual retreat for women on the site.

Here is where the story gets sticky: the salvage excavation (conducted by law by the Israel Antiquities Authority whenever new construction might threaten the destruction of ancient remains) on Father Solana’s new estate revealed the actual ancient village of Migdal, and a beautifully-preserved synagogue dating to the Second Temple era! (There are only seven such synagogues in Israel.) Now this site became a national heritage treasure, of interest to tourists and scholars of all stripes, and archaeologists have been busy excavating there since.

The discovery was thrilling news to Father Solana, and to the Catholic Church. From Magdala’s website (the current development there has been named “Magdala”):

Divine Providence had reserved the unearthing of Magdala for this moment in time. Perhaps God was waiting to speak to the people of our time through this site. In just a few short years, with only part of the site excavated, Magdala has already become a very special place of history and culture for the Jewish community as well as a holy site for reflection, teaching, prayer, and worship for all Christians, regardless of background or denomination.

This was equally thrilling to the Antiquities Authority, and to all people who might have an interest in Judaism of the Second Temple era. Imagine: a synagogue contemporaneous with the Temple itself, boasting mosaic floors, frescoed walls and the centerpiece of a low bimah (where the reader would have knelt to read from the Torah scroll), carved with a seven-branched menora. 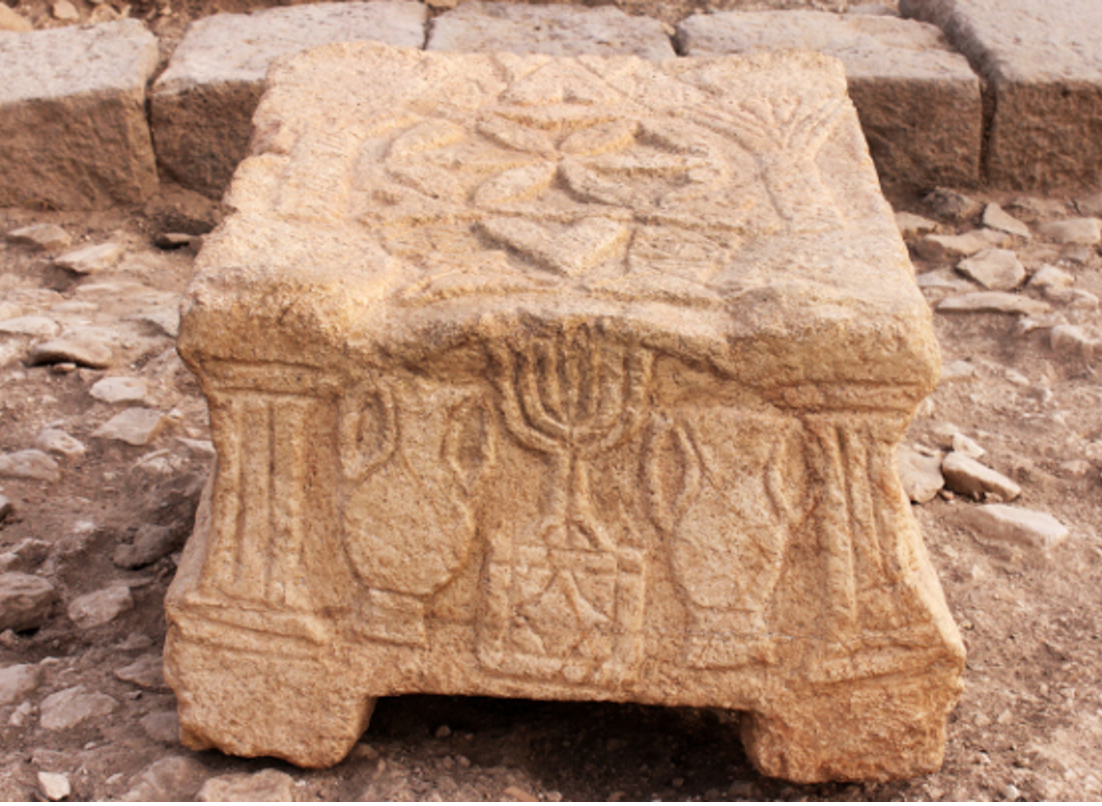 Excavations have continued apace, uncovering residential areas, a marketplace, mikvaot, and fishermen’s work area. Migdal/Magdala is emerging as one of the best-preserved villages of the Second Temple era, allowing all visitors to step back in time and explore what a Jewish village in Israel would have looked like 2,000 years ago. 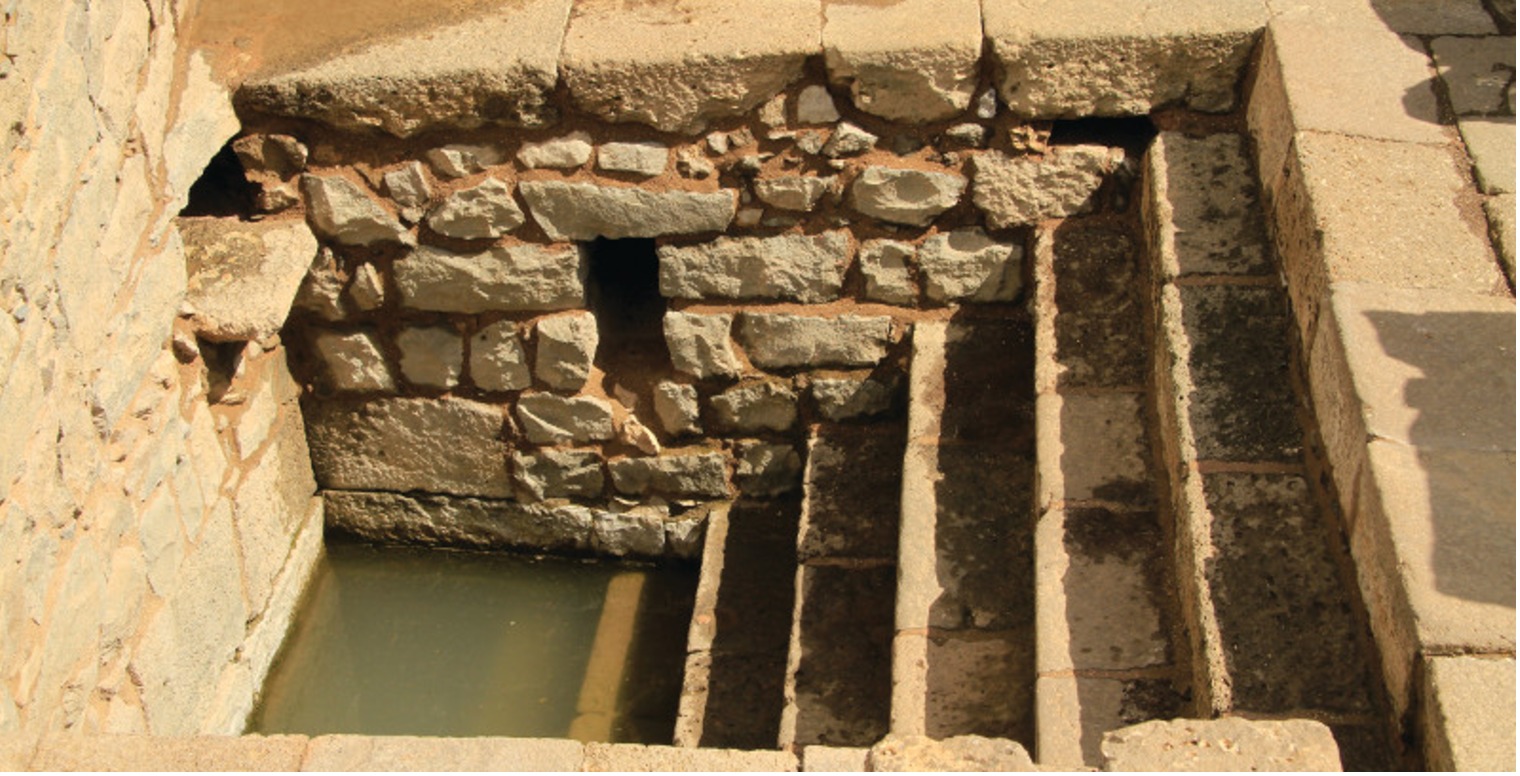 Alongside the archaeological excavations, however, is a growing Christian religious complex: visitors center, gift shop, guest house, restaurant. The brochure and website introduce a 1,000-day capital campaign to raise $48 million (hurry! there are only 54 days left!) “to develop the site and services at Magdala so it can become a premier catalyst for worldwide renewal and reconciliation in the Holy Land.” This is privately-owned land, and so Father Solana and the Catholic Church can legally do with it as they please. What is troubling is that visitors to Magdala are unwittingly experiencing an archaeological site that has been designed with a missionizing agenda.

It is true and worth noting that the signage around the remains of the synagogue and the other excavated areas makes no reference to Jesus or Mary Magdalene, though the large photographs lining the the walkway around those ruins pay tribute to the Catholic Church and current pope. Continuing through the site to the port area and marketplace, though, one cannot avoid the numerous signs informing the visitor of the significance of Jesus, Mary Magdalene and the Church. They are not unobtrusive, and are markedly religious: 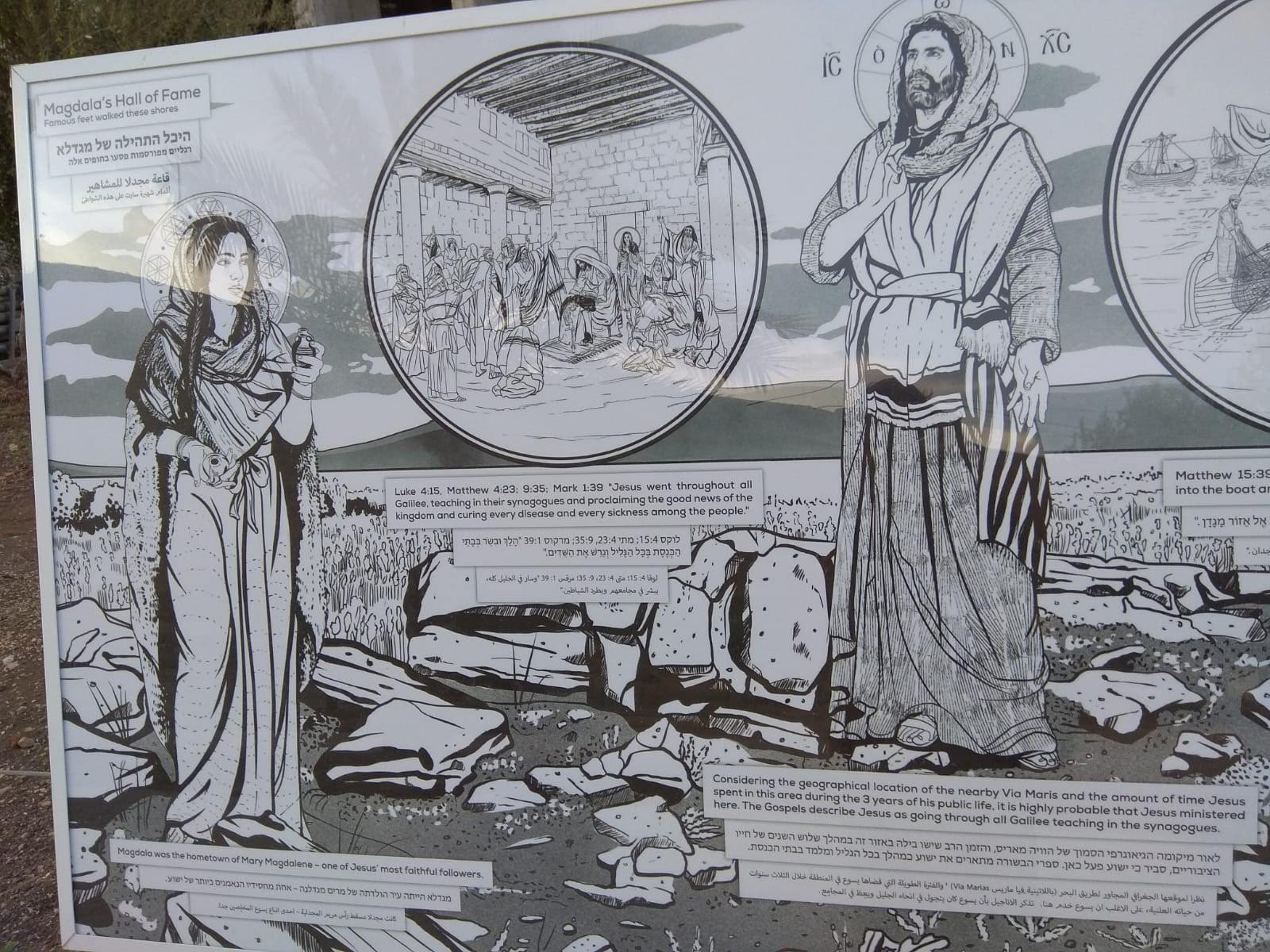 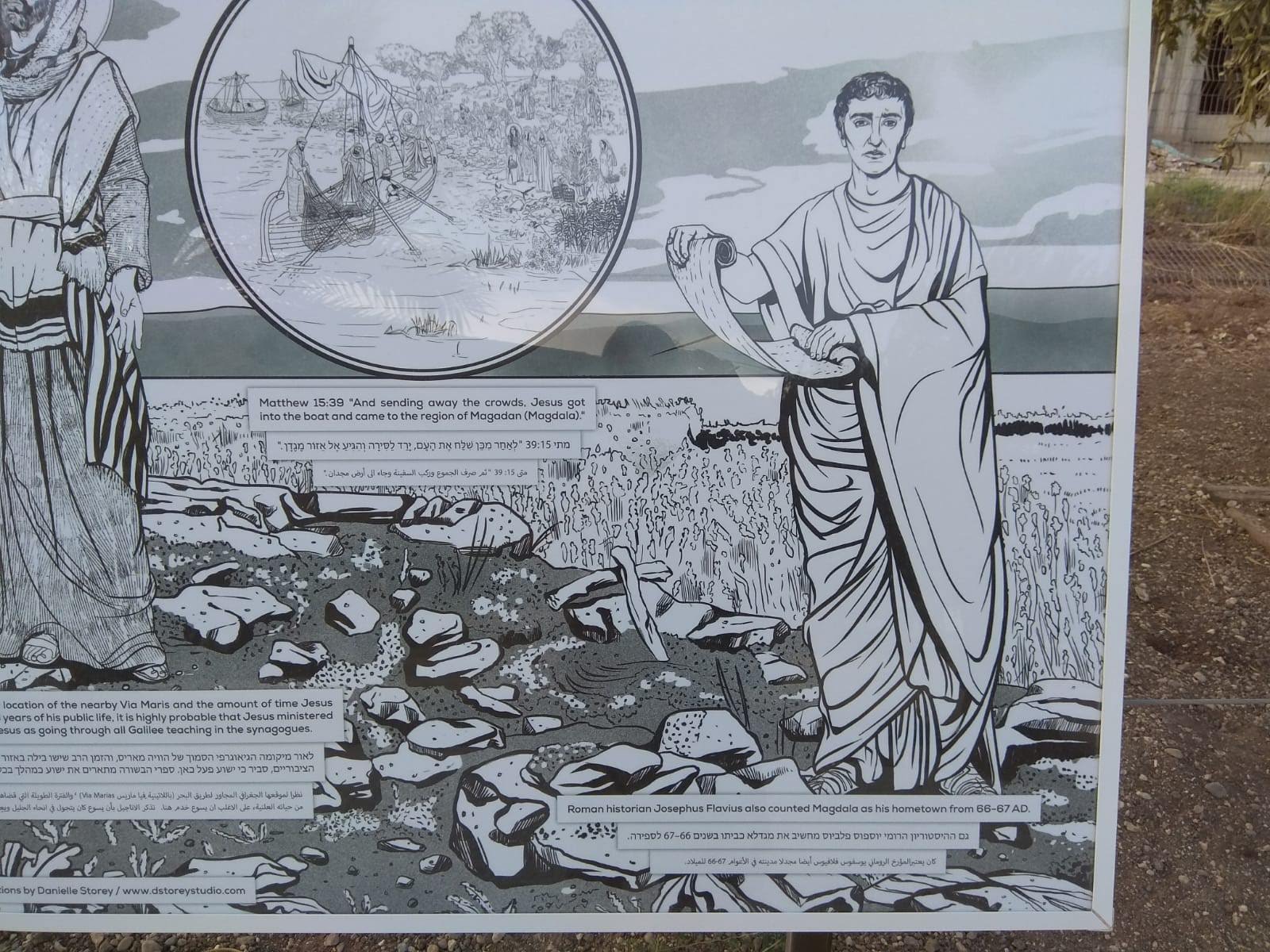 In order to reach the excavated port area, I passed a lovely, unmarked building (no cross in site, no indication that the building is a place of worship). This, I discovered later, upon reading the promotional material, is the Duc in Altum, a complex of six chapels. The ground-floor chapel is a low-ceilinged room; stone benches surround the recently excavated flagstone floor of the first-century marketplace, on which was erected a recently-constructed stone altar. This is the marketplace of ancient Migdal, and I have to enter a church to view it.

What struck me was the gorgeous, realistic portrait lining one entire wall of the chapel: 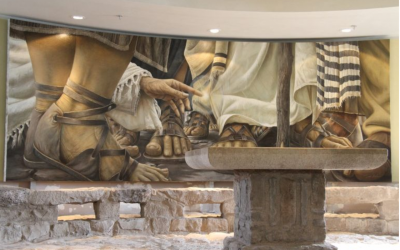 There are no images of Jesus’ face, of the Passion, of halos or winged angels or disciples or saints. The mural depicts the encounter between Jesus and the hemorrhaging woman who is healed by touching his tzitzit fringes.

This painting is disconcerting. There seemed to be a layer of intent, of deliberate decisions made, in commissioning this particular image for this particular church. Missing is any blatant Christian iconography that immediately places an almost automatic, visceral distance between the Jew and a Christian site. (Jews might not recoil at an image of Jesus suffering on the cross, or of a saint administering the Eucharist, but such icons clearly indicate the function of the space for which they were commissioned.) Highlighted are the blue and white of Jesus’ tallit (so reminiscent of the Israeli flag and the modern Jewish experience), the familiar fringes, and the intensely realistic sandaled feet. The painting could almost be a casual snapshot of life in this city 2,000 years ago. It’s a very non-threatening, subtle portrayal of Jesus the Jewish rabbi, walking the streets of Migdal, miraculously healing the sick. The chapel — and it is a chapel, with altar and mass available upon request — is practically non-denominational, which is profoundly disturbing.

Consider the name of the complex: Duc in Altum, which means “put out into the deep.” Duc in Altum is the friendly missionizing face assumed by the Second Vatican Council nearly 50 years ago. The motto is an evangelical call to cast your missionizing net wide and deep, trusting that the allure of your bait will make you a fisher of men. Under the headline: “Duc in Altum, Put Out Into the Deep: New Evangelization and Christian Mission,” Deacon Keith Fournier explains the significance of the term for the website www.catholic.org:

Our task, no matter what our state in life or vocation, is to be missionaries, in every nation and to every culture. That understanding lies at the heart of what it means to be a Christian – we carry forward in time the redemptive mission of Jesus Christ. All Christians need to “put out into the deep” and lower our nets for a catch.

By naming their worship building Duc in Altum, the administration of Magdala is not hiding its agenda. Duc in Altum is what is happening here — casting nets out into the deep, hoping to catch new believers through a very intricate, very subtle missionizing complex designed to deliver a Christian religious experience to its visitors, who probably don’t even realize the very deliberate and carefully designed program they are experiencing. Why is Magdala’s Hebrew brochure double the length of their English one? Why are there illustrated signs relating the miracles that Jesus wrought and the holiness and significance of Mary Magdalene that I must pass if I wish to see all of the excavated areas? Why must I stand in a chapel to see the newly-excavated marketplace of Migdal?

Given proper permission by the Antiquities Authority, let Father Solana do as he pleases with the unexcavated land that he purchased — build a retreat, attempt to missionize, nurture his flock. Let the government reimburse him for the areas that have already been excavated or are zoned for future excavation. To be clear: there is nothing disingenuous about the Catholic Church building places of worship in the Holy Land that are clearly marked as churches and do not intrude on or affect my visit to a site of Jewish interest. But it is patently wrong for a recently-discovered archaeological site in sovereign Israel (for what was Migdal if not a Jewish village, complete with mikvaot, a synagogue, and Jewish iconography) to be designed and managed by the Church, with an evangelical agenda hiding in plain sight.

The archaeological remains of Migdal should be entirely under the auspices of the Israel Antiquities Authority, and entrance fees should go to the Parks Authority, who should be charged with general maintenance and removal of the overtly Christian propagandistic material. Further, Duc in Altum should be relocated, so that I do not have to stand in a Catholic chapel to show Migdal’s marketplace floor to my children, and clear differentiation should be made between the privately owned buildings of Father Solana’s Migdala complex and the ruins of ancient Jewish Migdal, so that I — a Jewish resident of the Jewish state — not be made to feel an uneasy guest while visiting an ancient Jewish city in Israel.

About the Author
Tamar teaches Tanach and Land of Israel studies, and is a licensed tour guide specializing in northern Israel. Her book on the personalities of the sons of Jacob and the contours of their nahalot (Tribal Lands: The Twelve Tribes of Israel in their Ancestral Territories) has just gone into a second printing. Tamar and her family live on their farm in Moshav Sde Ilan, her home base for sharing her passion and knowledge of the Galil. She blogs on her adventures in farming, guiding and life in the north at www.fieldofdreams.co.il.
Related Topics
Related Posts
Comments