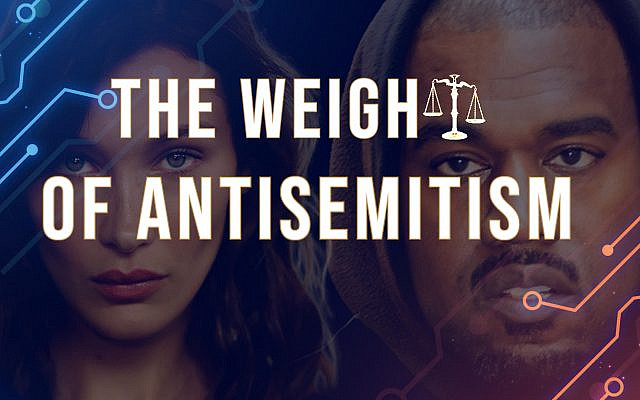 Created by MJE Staff using Adobe Photoshop
The fierce reaction to Kanye West’s antisemitic comments was warranted and justified. Much has been said about the fallout but there’s an important angle that has not been spoken about which deserves attention. There seems to be some picking and choosing when it comes to denouncing antisemitism.
In various places, the Hebrew Bible uses the metaphor of weights and scales to stress the importance of a balanced, fair judgment in a trial:
You shall not falsify measures of length, weight, or capacity. You shall have an honest balance, honest weights. (Leviticus 19: 35,36)
You must have completely honest weights and completely honest measures, if you are to endure long on the soil that your God is giving you…everyone who deals dishonestly, is abhorrent to your God. (Deuteronomy 25: 15,16)
Dishonest scales are the Lord’s abomination… (Proverbs, 11:1)
Based on these verses, the great German Jewish thinker Rabbi Samson Raphael Hirsch taught how we are all in effect judges faced with rendering judgments on a daily basis and that when accumulated, those judgments impact society and form the court of public opinion: “It is the justice of those things on whose correctness the honesty of human intercourse depends. The Torah considers everybody who counts, measures, or weighs anything and on that declares its content…to be and to have the responsibility of a judge. He is an officer of justice, he pronounces judgment as to what is right and fair, his word is judgment: a declaration of what is right. But this places the responsibility for the honesty and legality of things in general in the hands of the conscience of every individual person. Everyone is placed in charge of it, over it, and any misuse of this power is iniquity and just as great a wrong as a misuse of the legal power of a judge.”
I share this teaching because amidst all the justified outrage and activism in the wake of Kanye’s comments, I couldn’t help but think about the muted reaction from the mainstream when figures on the left side of the ideological aisle spewed their brand of antisemitism. When Roger Waters, the Hadid sisters, and others declare that Israel is a modern-day Nazi Germany, or that Jewish money runs the world, the blowback from corporations, government officials and celebrities is nowhere near the level just directed at Kanye West. In fact, Balenciaga and Adidas, two companies that recently severed ties with Kanye West, each just launched ad campaigns led by Bella Hadid.
Let me be clear. This is not a defense of Kanye or any other right-wing antisemitism. I am lamenting that the court of public opinion is failing the Torah’s fundamental message of fair and equal judgment, regardless of who is on trial.
There should be equal weight attributed to all flavors of antisemitism. When left-leaning figures like the Hadid sisters, and Waters can broadcast their ignorant messages without the same pushback that was given to Kanye, there are downstream effects which we are now seeing with the prevalence of anti-Israel vitriol on college campus and the rising popularity of the Boycott Divestment & Sanctions movement.
This is one of the reasons why the Biblical Hebrew word for honor – Kavod shares a root with the Biblical Hebrew word for heavy – Kaved. When dealing with something important and heavy, it is the honorable thing to take a step outside of one’s own biases and look at things objectively the way an honorable judge would – to give it the proper weight. And so, if you lean right, that’s even more reason to call out people like Kanye West, just as you would for the Hadids. And if you lean left, then reserving your energies solely for people who espouse right-wing antisemitism may be another example of holding false weights.
Unlike an individual judge in a courtroom, the court of public opinion is a collective endeavor shaped by individuals. That means we have a responsibility to ensure we are not putting our political biases ahead of what is right. Only then will corporations like Vogue, who continually highlight the Hadid sisters on their magazine covers, follow suit.
In fighting antisemitism or any form of hatred, our responsibility is to push back at whatever the source.
—
Special thanks to Andrew Hershkowitz for his contribution to this article.
About the Author
Rabbi Mark Wildes, known as The Urban Millennials' Rabbi, founded Manhattan Jewish Experience (MJE) in 1998. Since then, he has become one of America’s most inspirational and dynamic Jewish educators. Rabbi Wildes holds a BA in Psychology from Yeshiva University, a JD from the Cardozo School of Law, a Masters in International Affairs from Columbia University and was ordained from Yeshiva University. Rabbi Mark & his wife Jill and their children Yosef, Ezra, Judah and Avigayil live on the Upper West Side where they maintain a warm and welcoming home for all.
Related Topics
Related Posts