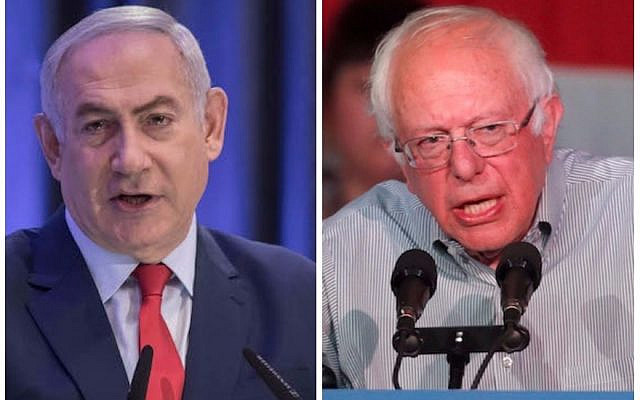 The great internal threat to the cohesiveness of the Jewish people is the growing divide between particularists, whose primary loyalty is to Jewish interests, and universalists, seeking the well-being of humanity. Those two commitments, essential elements of a healthy Jewish identity, are today in profound imbalance, each appropriated by opposing ideological camps. Most of our political and religious schisms can be mapped along that particularist-universalist fault line.

As it happens, the two most prominent Jews in politics today — Bibi Netanyahu and Bernie Sanders — are archetypes for that divide. The 2020 election season in Israel and America provide us with leaders who, each in his way, demonstrate what happens when Jews choose either extreme particularism or extreme universalism. Together, they offer a sober warning of how contemporary Jewish discourse becomes distorted.

Let’s begin with Netanyahu. In his increasingly desperate attempt to remain in power, he has declared war against the delicate balance between Israel’s two essential identities, as a Jewish state and as a democratic state. The framers of Israel’s Declaration of Independence defined Israel as the state of all Jews, whether or not they are citizens of Israel; and as the state of all of Israel’s citizens, whether or not they are Jews. Israel, according to its founding document, is to uphold and constantly balance its Jewish and democratic commitments.

Netanyahu is the first prime minister to reject the entwinement of those two identities. Seeking to forestall the possibility of a Benny Gantz-led government depending on backing by the Arab List, Netanyahu has effectively defined Israel as a Jewish-only democracy. “The public gave me more votes than any other candidate in Knesset elections in the history of the country,” he declared after the most recent vote. That is true if “the public” means the Jewish public. For Netanyahu, including Arab voters in the decision-making process is an attempt to “steal the elections.” Twenty percent of the nation’s citizens have no right to help determine who will be their prime minister.

One may argue against the wisdom of relying on an Arab party that includes Knesset members who have identified with terrorist groups. (Gantz has made clear that his alliance with the Arab List — if it happens at all — will be a “technical” and temporary arrangement, intended only to get rid of Netanyahu.) There is an urgent debate to be had over how best to encourage that majority of Arab Israelis who, according to consistent polls, want to be part of the Israeli mainstream, without legitimizing some of their representatives who are disloyal to the state.

But Netanyahu is no longer interested in such subtle distinctions. By effectively promoting Jewishness as the only real measure of citizenship — a position advocated until now by mostly peripheral political figures — he threatens the delicate balance at the heart of Israeli identity. What began as a cynical attempt to co-opt the Kahanist Jewish Power party into his coalition has become an ideological embrace.

For Bernie, Jewishness has value only when it transcends itself. The task of the Jewish people is to sacrifice its needs for the needs of others. If Jewish interests conflict with progressive interests, there can be no hesitation over which takes precedence.

In fact, betraying Jewish self-interest is a Jewish imperative. There is no contradiction between Bernie’s professed Jewish pride and his embrace of Jeremy Corbyn and Ilhan Omar: his very Jewishness obliges him to stand with anyone fighting for social justice, even if they happen to be anti-Semites feared and loathed by his fellow Jews.

Yet it wasn’t until I read about Bernie’s interaction with Alan Gross, an American Jew imprisoned in Cuba, that I understood the depth of Bernie’s capacity to betray fellow Jews for the sake of universalist principles. Last week, Gross, who spent five years in Castro’s jails for trying to connect the Cuban Jewish community to the internet, told NPR about a visit he received in prison from three US senators, one of whom was Sanders. The three senators were on a visit to Cuba and went to see Gross. But, unlike the other two senators, Sanders appeared aloof during the meeting, as though he had not wanted to be there at all. Finally, he told Gross: “I don’t know what’s so wrong with this country.” (Gross made clear in his NPR interview that Bernie was defending Cuba with that statement.)

This story offers two essential insights into Bernie Sanders. The first is about Bernie the ideologue: even in the presence of one of Castro’s victims, who had lost all his front teeth in prison, Bernie was incapable of setting aside his admiration for the Cuban regime and offering simple human solidarity. Bernie, it turns out, is not only an apologist for cruel regimes, but is himself guilty of ideologically driven cruelty.

The second insight is about Bernie the Jew. One of the most precious legacies of Jewish history is pidyon shevuyim, the commitment to rescue a fellow Jew in captivity. Yet Bernie could not see in Alan Gross a brother unjustly imprisoned for trying to help fellow Jews, could not manage a warm word of Jewish solidarity. Devoid of particularist instincts, Bernie sided with Gross’ jailers.

The Jewish holiday cycle we are now entering — framed by Purim and Passover — offers  useful metaphors for the particularist-universalist divide. Purim is the holiday of Jewish vulnerability, of the need to be mindful that we live in a world where threat is real. The Torah insists: “Remember what Amalek did to you on your journey out of Egypt, how they surprised you on the road and cut off all the weak people at your rear, when you were thirsty and weary and they did not fear God.” In the Jewish imagination, “Amalek” represents the genocidal threat that Jews face in every generation. And Haman, the villain of Purim, is identified by the Scroll of Esther as a descendant of Amalek. The purpose of remembering Amalek is to remember that we live in a world where genocide is possible. Don’t be fools. Protect yourselves.

Passover offers us a very different commandment of memory: remember that you were strangers in the land of Egypt, the Torah repeatedly admonishes. Remember that you live in a world where others also suffer, and that you are obliged to defend their interests along with your own.

When the Purim and Passover sensibilities fail to temper each other, the result is a deep distortion in the Jewish persona. Bibi the Purim Jew and Bernie the Passover Jew embrace only one aspect of the particularist-universalist dynamic. In so doing, both men desecrate the spirit of Jewishness.

Our particularist and universalist identities are embedded in our founding story. When God commands Abraham to “go forth” from his father’s house and from his homeland, He is telling Abraham to separate himself from the non-Jewish world — to effectively cut himself off from any influence extraneous to his mission of founding a new people. But then God explains to Abraham the purpose for his separation: “And through you, all the families of the earth will be blessed.” For Judaism, particularism is a strategy toward a universal goal — the messianic vision of the nations gathering in prayer in Jerusalem.

Built into our being, then, is the imperative to be distinct from the world and at one with the world. Any attempt to delegitimize universal longings among Jews threatens our ultimate purpose as a people. Any attempt to trivialize the need to protect and enhance the well-being of the Jewish people undermines an essential source of universal blessing.

In place of one-dimensional ideologues, we need multi-dimensional Jews, who embody the creative tension between the particularist and universalist pulls within the Jewish soul — at once Purim and Passover Jews, zealously protecting the Jewish people from threat while also feeling responsible for the well-being of humanity. The appearance on our calendars of Purim and Passover in such close proximity challenges us to rethink our growing particularist-universalist divide, and who we choose as role models to embody our story.