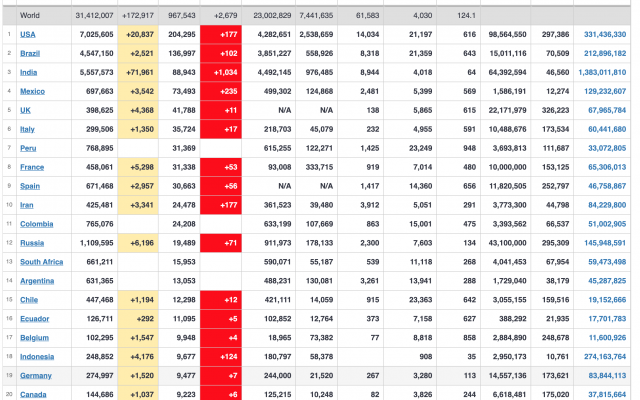 There are a few “universal” truths we have come to accept about COVID, in the US and Israel. 1) COVID was an unstoppable force that would sweep the world and kill millions and there’s not much that governments could do. 2) It is up to citizens to do the right thing and if they do not do it, people will die, the economy will shrink and it will be their fault.

As Israel plunges into a second lockdown, with fines given out, people locked in their homes and blame sent on partygoers in Tel Aviv, Heredi Jews, and the protesters, we should look at the numbers around the world and check our assumption.

I believe this assumption is taken for granted due to how data is presented. We look at the countries with the most number of deaths first. If you simply list countries according to the fewest deaths, you suddenly find that the list is very long. When you do this, you realize that COVID-19 is terrible but not unstoppable. The country where COVID started, China, accounts for only 4,000 deaths in spite of a 1.2 billion population. COVID has spread the world but there are over 100 countries, or nearly half of the countries in the world that have fewer than 100 deaths. In fact, fewer than 20 have more than 10,000 deaths. This means that this is not a global pandemic, it is a pandemic that affected governments that are poorly prepared and care little to stop the spread. 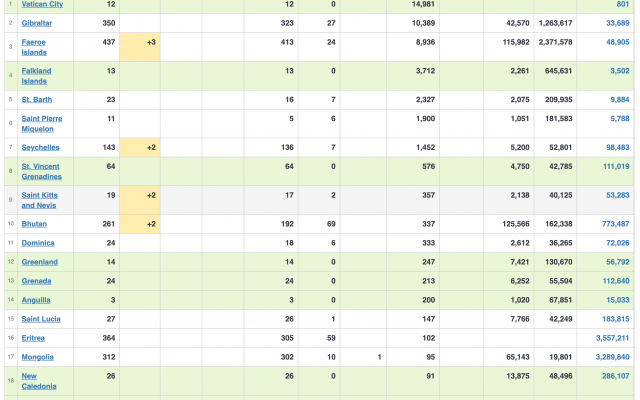 This addresses the second assumption:

2. It is up to the people to stop the spread.

If it were up to the people, then nearly all countries would be affected equally. However, most countries have been largely unaffected. Or, they were affected but took measures to prevent mass deaths. Taiwan is next to China, but economy was not shut down and they suffered only seven deaths. Georgia, an ex-scialist republic with low GDP, located near Middle East and next to Russia but has only 20 deaths. But when we look at United States, Brazil, Russia and India, these governments run by populist corrupt and incompetent politicians, they are at the top of the death heap.

Israel is in top 50 with 1,200 deaths. At first glance, when comparing to US and Spain, it appears like Bibi is doing well combating the virus. However, Israel is one of the worlds smallest nations. It is 33 times smaller than United States. When we look at cases per 1 Million, it is 13th in the world, right behind United States. Thanks to the herculean efforts of Israeli doctors it is 50th in the deaths/ 1M. If Israel was the size of United States, it would have nearly 40,000 dead. Israel is an advanced country, it is a small country that should be nimble, it should be in that list of 100 with no deaths. Yet, it is one of the worlds worst performers. 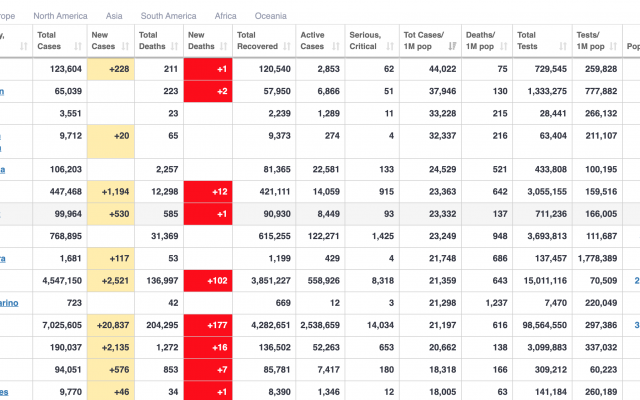 Israel is 13th in the world for cases per 1 million people.

When you realize that 20% of the countries account for more than 80% of the deaths, you start to take away the onus from COVID and population but realize that the fault lies with poorly prepared, uncaring and inept governments. Fact is that the leadership of the United States, not COVID killed 200,000 people and destroyed the world’s best economy. Israeli government killed 1200 Israeli citizens and destroyed a vibrant economy and put the lives of millions of people on hold.

China may have started it, but the 100 countries with less than 100 deaths show us that the buck stops with the government that is willing to be responsible and do the right thing. That has not been the government of Israel and United States. The people of the countries that suffered these preventable deaths, must hold their leaders to account. And while the peace deal with UAE and Bahrain are nice, those governments did not kill a single Israeli. Those governments were never the enemies of Israel, the politicians who argue for a raise while Israelis die, are. What Israel needs right now is not a peace deal with nations with whom we have never tuly fought, but a plan and a deal with COVID that is killing Israelis every single day.

The data for this article was gathered by worldometers.info