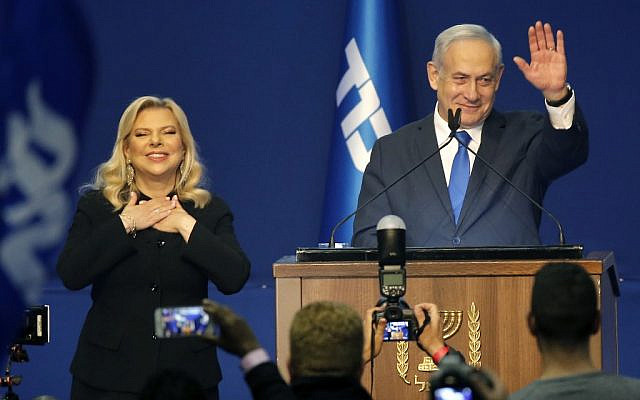 Greetings fellow voters. I come from the future. No, not the really distant future when artificially intelligent supercomputers reveal that it’s all been a simulation. Nope. I’m from the seventh election cycle in November 2023. I have risked everything to come back and warn you so that, somehow, you can affect the space time continuum and restore sanity — and democracy — to the State of Israel.

I won’t get into the specs of the time machine. Nor the inherent paradoxes in time travel. No, I don’t have time for that. The fourth — and most critical — election cycle is in a few days and according to my calculations, the last chance to save the country before it spirals into a never-ending cycle of elections and unsolicited text messages that render an intelligent, albeit easily swayed populace, to lose all interest in voting.

The seventh election cycle has the lowest voter turnout in the history of Israel. Only three people are allowed to vote, in fact. Sara, Yair and Kaia, the Netanyahu family’s beloved (and deceased) canine. Needless to say that the president, Donald J. Trump (who was made an honorary citizen and mayor of Trump Heights in 2022) taps Netanyahu to form a coalition. He manages a very broad 119 Knesset member coalition (hand picked by Sara with one dissent — Ahmed Tibi) and, in the face of rising poverty and record unemployment (no one has been back at work since the 13th lockdown, caused by the Belgian variant of COVID-19), he enacts sweeping legislation to abolish all voting (and save millions of shekels) and nominates himself as “PMFF.” Prime Minister For Forever.

It’s the fourth and final democratic elections that are the tipping point. That’s why I’m here. See, here’s how it plays out. Benny Gantz miraculously — and I mean miraculously! — passes the threshold with 5 seats. This may not seem like a big deal, but under the rotation agreement signed after the third election, he automatically assumes the premiership before a fifth election (November 2021). This unexpected surprise throws the whole system into chaos and leaves BiBi with two impossible choices: Go to a fifth election (while under trial) or automatically get replaced as prime minister in November, leaving himself vulnerable to prosecution and jail or worse: incur Sara’s wrath.

If we’ve learned anything in the future, it’s that Netanyahu is head and shoulders above every other male politician, at least when it comes to political maneuvering. He goes after the clear and present danger first: Gantz. This wasn’t going to be easy for BiBi; he couldn’t use his tried and true methods of dazzling Gantz with promises of a premiership or lies about how much he cares for the State of Israel over his own troubles. The pesky former general can’t be bought with a comfortable ministerial salary and the trappings that come with it. No, Netanyahu (Sara) realizes that there is only one way to get Gantz removed, but it isn’t going to be pretty.

An oversight on the Lebanese border. A Hezbollah friendly fire kills an operative. BiBi pounces on the opportunity and tells the world that the IDF has stopped a major terror act. He antagonizes Nasrallah until the situation escalates into an actual conflict. The Third Lebanese War. And we all know that the third sequel always sucks. Just look at Godfather part III. By the second week of the war, Gantz looks tired and dejected. BiBi’s media empire and army of internet trolls paint Gantz as weak and unable to handle the pressure, like they had done with Peretz and Olmert in the Second Lebanese War. The public calls for his removal. And then, shockingly, Gantz resigns out of respect for the people’s wishes! Once again dealing a fatal blow to all his supporters who counted on him to replace Netanyahu.

That leaves the three stooges: Lapid, Bennett and Sa’ar. Easy work for the master. He divides and conquers. Bennett and his 8 mandates are the first to fall. He’s named Security Minister (with promises to make him  a “hero” for ending the fabricated conflict BiBi had orchestrated) Shaked gets the justice ministry with keys to a D9 bulldozer. The High Court of Justice is demolished and, in its place, a Trump Tower.

Sa’ar is the next in line. His 10 mandates seem like a lot at first, but now that BiBi has a right-wing coalition, he paints Sa’ar into a corner. Either join the new government (still reeling from the devastating losses of the Third Lebanese War) or be labeled a “leftie” and join Lapid, Meretz and the Arabs. Sa’ar has no choice. He and Shasha Shasha Shasha join the Likud government, astoundingly with 0 ministerial positions. Not even one of the fake ones that BiBi keeps making up to give away as bargaining chips to other parties.

Lapid, who receives 8 mandates, is in the best position to form a government at first. He could form a very narrow coalition with the outside support of the Arab joint party. However, once the Third Lebanese War starts, BiBi and his legions of fake profiles pick apart Lapid’s military experience. He is not fit to lead a country at war is a label that sticks. Once Gantz, Bennett and Sa’ar are neutralized, there isn’t much left for Lapid to do. He ends up joining this war time coalition, as an agricultural minister.

However, there is one glimmer of hope, and it comes from the most unexpected corner of the political field: Labor. That’s right. Stop laughing. I’m being serious. The rebel leader Merav Michaeli manages to resuscitate a dying party and is the dark horse of the election. 12 mandates! She fights the corruption and manages, despite being vilified as a “traitor” and a “Nazi” to challenge BiBi’s hegemonic control. In fact, in a series of brilliant political moves, she introduces several no confidence votes that tumble the fourth, fifth and sixth Likud governments, paving the way for the seventh elections, on BibiDay (everyday is now called BibiDay. It’s a bit confusing but you get used to it)

So, my fellow voters, I beg of you to support the rebel leader Merav Michaeli and her labor party. It has become clear to the world in 2022 that women are way more suited to run governments than men. If enough of you vote for her in the fourth election, you can perhaps change the trajectory of history, prevent the third Lebanese War, the fifth elections and the seventh term of BiBi.

But then again, if enough of you did, I would probably not have needed to come back in time to warn you. Like I said, time travel is full of paradoxes.

Go out and vote!