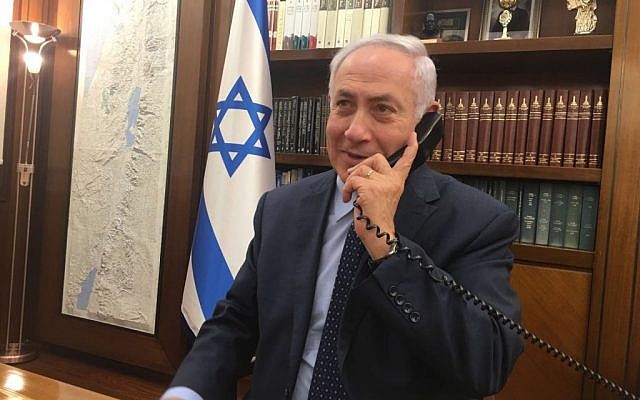 Prime Minister Benjamin Netanyahu speaks on the phone with Israel's ambassador to Jordan, Einat Schlein, and the security official who was stabbed and shot two Jordanians, on their return to Israel, July 24, 2017. (courtesy)

Late last night the Israeli media repeatedly broadcast a telephone conversation between Prime Minister Netanyahu and the Israeli security guard accused of killing two Jordanian citizens after having been attacked with a screwdriver. The security guard and Israel’s ambassador to Jordan had just crossed the border back into Israel and the implication was that Bibi had brought about their release. Bibi once again, as with Gilad Shalit, was a hero bringing our sons home. To emphasize the point, the electronic media is now featuring photos of our prime minister embracing the security guard .

However, anyone who follows the news knows that it was not Bibi but King Abdullah of Jordan who, at the urging of a variety of international players, had agreed to the release of the security guard following a rushed visit by Shin Bet chief, Nadav Argaman, to Amman.

The price that Israel is paying for this Jordanian gesture is clear. The metal detectors at the Temple Mount have already been removed and the Cabinet agreed last night to dismantle the hi-tech security cameras that had been placed at the entrance to the Temple Mount. There could not have been a more embarrassing climb down.

Knesset Member Masud Ganaim of the United Arab List faction has taken advantage of this fiasco to call it “a victory for the demonstrations and the struggle of the Palestinian public”.

In some ways there was a resemblance between what has just taken place and when Israeli agents, posing as Canadian tourists visiting Jordan, poisoned Hamas leader Khaled Meshaal back in September 1997. However, two of the agents were subsequently arrested by the Jordanian authorities. Here too, in order to obtain their release and those of three others who had sought refuge in Israel’s embassy, Bibi had had to capitulate by personally travelling to Amman to apologize to King Hussein, providing the antidote that saved Mashaal’s life and freeing seventy Jordanian and Palestinian prisoners including Israel’s most loathed enemy, Sheik Ahmed Yassin.

Israel’s government should have realized from the outset that there would be violent reactions to her placing metal detectors at the entrance to the Temple Mount. Following the murder of two Israeli Druse policeman by Palestinian terrorists who had taken weapons to what Muslims call Haram al-Sharif, one can understand the justification for such a decision. However – and this is the key point – Israel may have conquered/freed (depending on one’s political perspective) East Jerusalem and the lands up to the river Jordan, but we are not the only actors on the stage.

Any action in respect of increased security measures on the Temple Mount should have been taken following discussions with all of the other players including the Waqf, Arab Knesset members and Jordan as custodian of Muslim holy places.

Israel’s action was arrogant and once again Bibi is coming home with his tail between his legs. That’s not heroism but stupidity.