The term ‘First 100 days’ in office was coined by US President Franklin D Roosevelt and referred to a windfall of legislation that presidents promote during the earliest days of their administration. In Roosevelt’s case, the first 100 days were used to introduce 15 bills all meant to alleviate the Great Depression through ‘New Deal’ initiatives such as mass employment and infrastructure projects. Since then, other Presidents have had their own 100 first days. Lyndon Johnson set out to establish his Great Society while addressing poverty and inequality; Clinton focused on balancing the US budget while President Obama passed an economic reform bill aimed at stemming the impact of the 2008 financial crisis. It is thus during their first 100 days in office that Presidents introduce their vision of their Presidency. This was perhaps best explained by the ‘West Wings’ fictitious Chief of Staff Leo McGarry.

In order to understand Biden’s vision for his presidency, I analyzed his first 100 tweets. I sought to examine the president’s domestic and foreign priorities, to identify the issues that will be prioritized and to uncover the policy measures that will soon take shape. First, I assessed whether Biden’s 100 tweets focused on domestic or foreign policy ones. While the POTUS Twitter account belongs to a national leader, that leader is also a global one. Indeed, when POTUs tweets, the world listens. During Trumps’ reign, when POTUS tweeted, the world shuddered.

An analysis, shown below, demonstrates that Biden’s first 100 tweets focused primarily on domestic issues. While this may not be surprising, given that the US is in the midst of a devastating Covid outbreak that has claimed the lives of half a million Americans, one would expect to encounter tweets summarizing calls between Biden and world leaders or images of Biden conferring with his national security teams. America’s business if, after all, the world’s business. Yet that was not the case. The vast majority of Biden tweet’s focused on domestic issues, including but not limited to Covid. 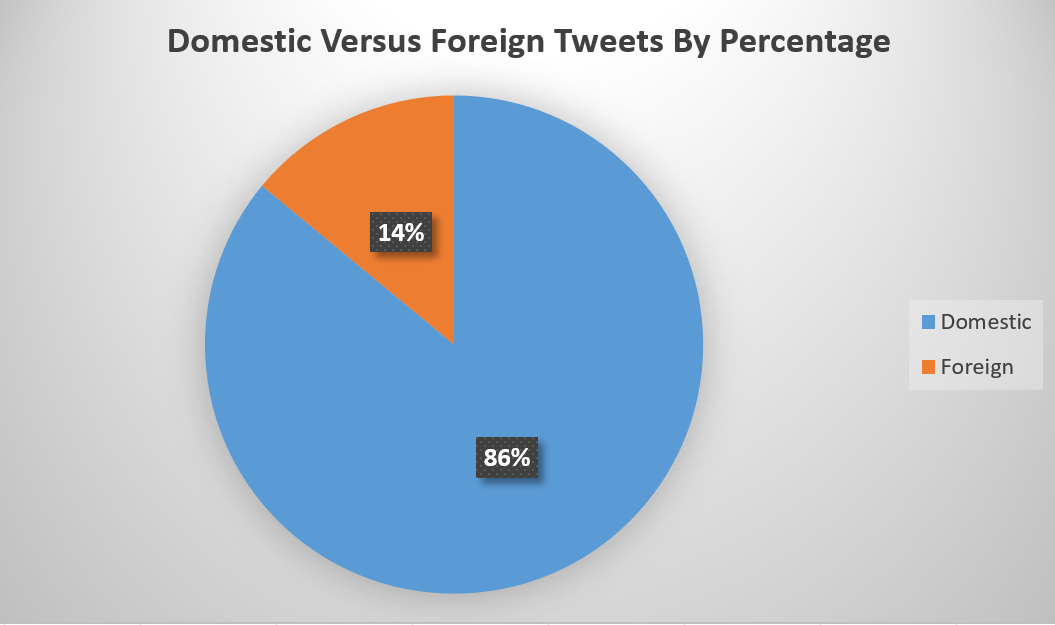 The issues addressed by Biden may be seen in the table below. These may be summarized as a ‘return to tradition’. Biden’s 100 tweets suggest that he views his chief role in reversing Trump’s contentious policies while restoring faith in American institutions and processes. Biden referred frequently to racial tensions which will be at the center of his Presidency. The President also addressed the need for reform in the justice system ending private ownership of jails, an important issue for African Americans who are but pawns in the financial market of private prisons. 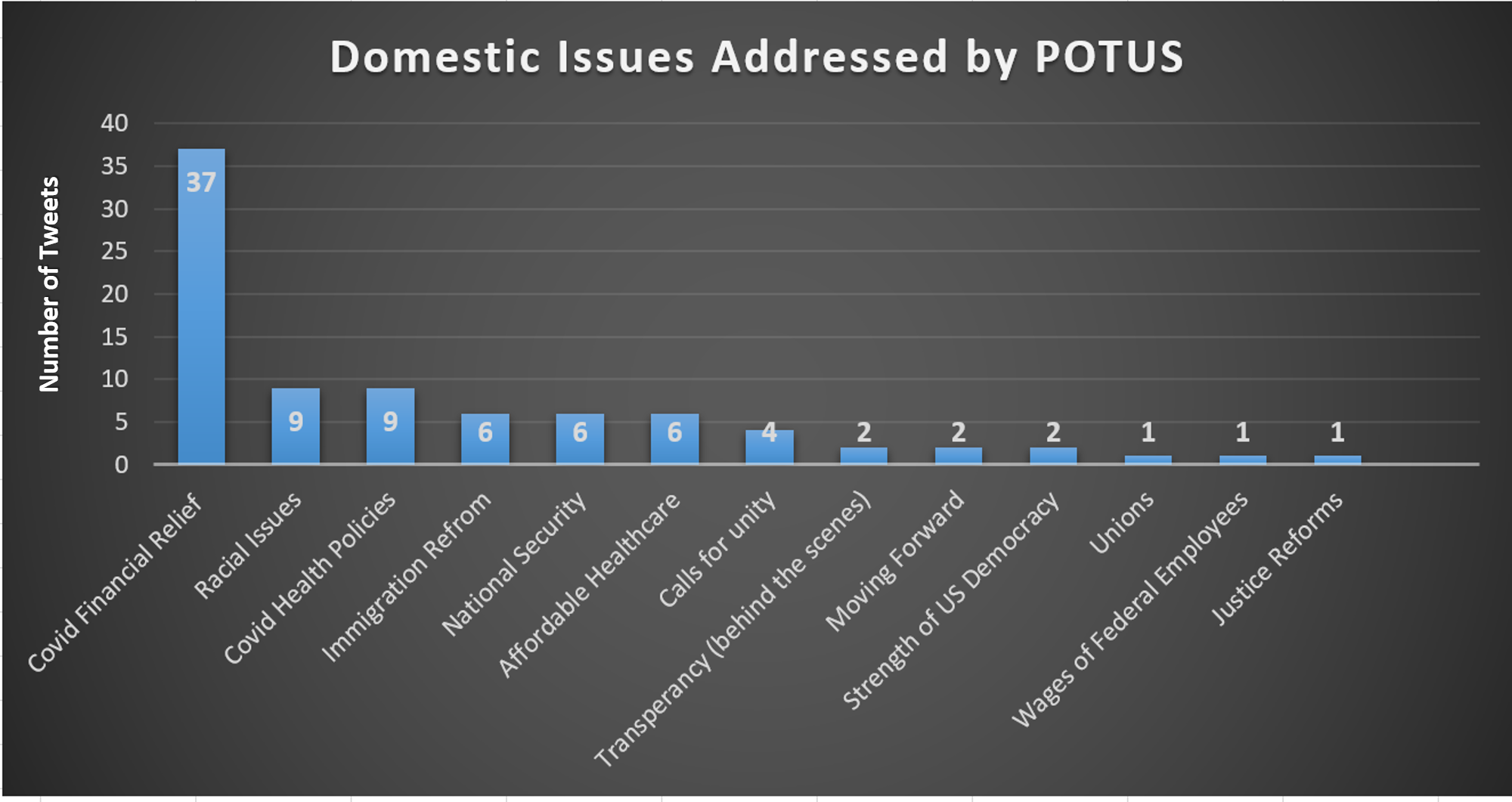 Promising to reunite immigrants with their children, and to end the detention of children at America’s borders, Biden also called for unity in America, a new deal between Americans and their elected officials. Several Biden tweets followed the pattern of “I promised…and today I delivered on that promise”. Such tweets may have been published to re-establish the integrity and prestige of the Presidency which was fractured during the reign of Donald Trump’s Twitter account.

Lastly, Biden dealt not only with the Covid outbreak and the measures necessary to control the pandemic, but he also commented on the societal impact of Covid promising to better healthcare for elders and make healthcare affordable for elders who may be unable to endure the financial costs of healthcare. His financial stimulus package was marketed as a national effort to put average Americans back to work. Such ‘average’ Americans featured prominently on Biden’s account. Biden also spoke of the need to help small businesses, traditionally the backbone of the US economy and the occupants of Main Street.

Small businesses are the backbone of our communities – and far too many are on the brink of closing their doors. Tune in as I announce additional steps we’re taking to support them. https://t.co/BHhUV3nzng

As I’ve said throughout my whole career: The middle class built this country, and labor built the middle class. This afternoon, I met with labor leaders to discuss the American Rescue Plan and how we’ll rebuild our infrastructure—creating good-paying, union jobs in the process. pic.twitter.com/3dyv23GvLq

Last year, Michele lost her job because of the pandemic. I recently gave her a call to hear her story and discuss how my American Rescue Plan will help families like hers. pic.twitter.com/SAqM2GytPf

The distribution between domestic and foreign tweets indicates that Biden’s first 100 days will put ‘America First’, to paraphrase Donald Trump. Yet this will be an altogether different America, one which returns to its tradition of accountability, national unity in the face of crises and assistance to average Americans. Biden will focus on healing America, rather than tearing it apart. While Trump spewed hate, Biden adopts the rhetoric of hope which has been central to Presidential communications since the days of John F. Kennedy.

Today, America is officially back in the Paris Climate Agreement. Let’s get to work.

This may be one issue through which Biden wishes to signal America’s return to the world stage. Trumps’ era of diplomatic dis-engagement will be replaced by a commitment to global diplomatic engagement. Indeed, what better way to reposition the US as an engaged global leader than climate change- a planetary threat that continues to haunt humanity like an ominous spectre. It is through climate change efforts that America will return to the traditional role of a moral leader, one willing to place the global common good ahead of its narrow national interests. Whether America has ever actually placed the world’s needs ahead of its own is another matter. It is also through the prism of climate change that the Biden Administration will manage relations with other world powers and ‘polluters’ such as China or Russia.

The second issue prevalent in Biden’s foreign policy tweets was reaching out to US allies. Here again, Biden promises a return to tradition. The US would alter its uni-lateral approach to diplomacy in favor of collaborations with key allies including specific countries and diplomatic alliances such as NATO.

As vice president, I worked closely with America’s democratic partners to advance our shared vision and values. As president, I’ll work with our partners and allies to defeat COVID-19 and advance peace and shared prosperity around the world.

America is back. Diplomacy is back. pic.twitter.com/03dFPQyYjw

Biden’s promise to re-establish and strengthen ties with US allies perhaps best captures the spirit of Biden’s 100 first tweets. While Lyndon Johnson stood for societal change, and Obama for hope, Biden’s creed is that of tradition. He was elected to restore faith in America, domestically and abroad. To do so, he will adopt a traditional approach whereby America leads by example and by a ‘diplomacy first’ doctrine.