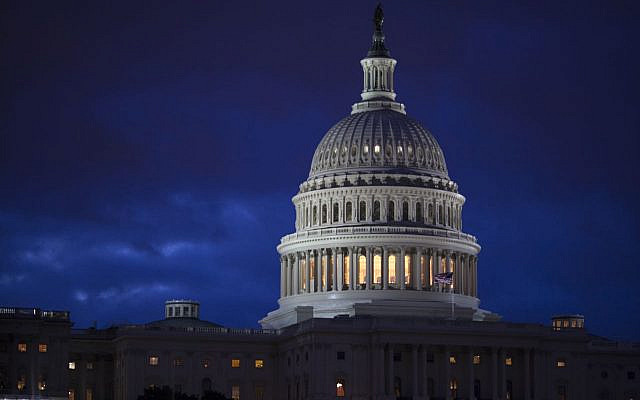 In this April 4, 2017, photo, the Capitol is seen at dawn in Washington. (AP Photo/J. Scott Applewhite)

The 116th Congress has been one of the most polarized Congresses in recent history. It seems that everything from public health to the United States Postal Service has become a partisan football.  In the fog of this parochial rancor, we sometimes lose sight of the things we can agree on as Americans.  For decades supporting the U.S.-Israel relationship has been one of the core areas of agreement among Democrats and Republicans.  While that consensus remains strong, it is under attack.  We must resist efforts to use Israel to score partisan points, and we need to redouble our efforts to make the U.S.-Israel relationship a bipartisan priority.

A vibrant U.S.-Israel relationship is in the interest of not only the American people, but also Israel, the people of the Middle East and the world.  The American consensus on our relationship with Israel has helped reduce the likelihood of war and enhanced the prospects for peace.  The recent normalization of diplomatic relations between the UAE, Bahrain, and Israel highlights that extraordinary progress can be made when Israel feels secure and the U.S.-Israel alliance is solid.  The simple fact is that this extraordinary strategic realignment of Middle Eastern countries could not have happened without strong bipartisan support in Congress for the U.S.-Israel relationship.

I spent more than ten years on Capitol Hill as a chief of staff. Throughout that time, we debated, we argued, we fought hard.  But we also reached out across party lines to find common purpose with colleagues on issues of common interest, including economic development, national defense and foreign relations.  Building bipartisan support for our legislative initiatives made them more attractive to a wider audience on Capitol Hill, helping increase the chances of success.

Representatives Elaine Luria (D-VA) and Lee Zeldin (R-NY) are two members of Congress who, despite facing some of the toughest opposition on Election Day this November from the opposite party, have time and time again put aside partisan and ideological differences for the common good of advancing the strategic U.S.-Israel relationship.

Congresswoman Luria, a member of the House Bipartisan Task Force for Combatting Anti-Semitism, was one of 12 House Democrats to vote in favor of a Republican motion to recommit on anti-BDS legislation. She also notably joined President Trump’s historic Abraham Accords signing ceremony between Israel and the United Arab Emirates and Bahrain.

Congressman Zeldin, one of only two Republican Jewish members of Congress, has long been a significant supporter on U.S.-Israel issues, launching the bipartisan Black-Jewish caucus, opposing the Iran nuclear deal, and taking the lead among Republicans in speaking out against freshman Congresswoman Omar’s anti-Semitic comments.

And while Luria and Zeldin may hold vastly different stances on other policy matters, in late 2019 the two led a bipartisan coalition of 241 members of Congress in urging the United Nations to defend Israel and combat Hezbollah.  They understood the grave threat that Hezbollah poses to Israel and stood together in a show of full bipartisan support that the United States would stand with Israel and its ability to defend itself. Doing so was good for America and the cause of peace.

Promoting bipartisan support for the U.S.-Israel relationship is not just smart, it’s strategic.  When support for Israel and our historic alliance becomes partisan, the relationship rests on shakier ground. Political power in Washington ebbs and flows between the parties.  Republicans may enjoy greater power for a few years, only to be followed by Democratic ascendency.  When support for the U.S.-Israel relationship is bipartisan, the alliance will remain strong no matter which party happens to be in power at any given moment.  And when partisan bickering creates gridlock on other issues, bipartisan consensus on Israel helps ensure that both Israel and the United States will nonetheless remain strong and more secure.

Too much is at stake to allow our alliance with Israel to become yet another partisan punching bag.  Only through Israel’s continued strong ties with the U.S. and its leaders, both Democratic and Republican, have we been able to make progress toward bringing peace to the Middle East not to mention the myriad other benefits that flow from the relationship.  Advancing bipartisan support in Congress for America’s relationship with its closest democratic ally in the Middle East, Israel, is a strategic necessity. To do so, we must support and elect candidates from both parties like Congresswoman Luria and Congressman Zeldin who – despite their policy differences – build consensus across party lines to ensure the U.S.-Israel alliance remains strong.