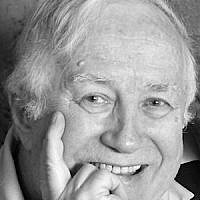 The Blogs
Peter Scott
Apply for a Blog
Advertisement
Please note that the posts on The Blogs are contributed by third parties. The opinions, facts and any media content in them are presented solely by the authors, and neither The Times of Israel nor its partners assume any responsibility for them. Please contact us in case of abuse. In case of abuse,
Report this post.

The same Orbán who enacted into the current Hungarian constitution that specifies the regime of Regent Admiral Miklós Horthy as the one that was and still is the embodiment of Hungarian independence, statehood and its Christian civilization.

The same Horthy who was in charge of the enactment and enforcement over several decades of an avalanche so-called Jewish laws which discriminated against, then disenfranchised, persecuted, robbed, eventually isolated in ghettos and removed from the body of the nation Hungary’s Jews, then stood by quietly while half a million of them were shipped off to Auschwitz in just a few weeks. Including every member of my family outside the capital city of Budapest. None have returned from there.

This is the man, Orbán, who will be welcomed with open arms by Bibi and his cohorts, feted like a hero and a mate and will no doubt stroll through Yad Vashem with the requisite sanctimonious look on his face.

Yep, indeed, you can tell a man by his friends. Netanyahu is no exception.

Way back in June 1967, I rushed into the Zionist Federation office in Sydney, Australia, to volunteer my services during the Six Day War, hoping to help in any small way I can.

Half a century later, I can only wonder what sort of a country will our Israel become?

About the Author
Lived and worked over the decades in Sydney, London and Budapest. Happily settled in Vienna, family on four Continents. My heart is in and with Israel - the nation and the original idea, not any political party. A lifetime of professional journalism behind and, perhaps, ahead of me, both in the Jewish and mainstream media.
Comments