(Following a non-stop last day in Berlin, we returned to the Golden Land, flying into New York).

After we returned to the U.S. following two weeks in Europe, we processed the visit. I posted some of my 3,000 photos on Facebook, in thematic groups ranging from shots of public transit to bridal parties in Prague to Terezin and Berlin. Naomi and I keep in touch with members of the Dresden group, where we shared bonds of geography and heritage. I wear the kippah from the Jewish Hospital regularly at services at my synagogue, Beit Chaverim. For Hanukkah, Naomi gave me Refuge in Hell: How Berlin’s Jewish Hospital Outlasted the Nazis by Daniel Silver. It will make intriguing reading, complementing the book I got at the hospital itself with its investigation into the precarious state of the hospital in the Nazi era, and speculation on why the hospital remained open.

We compiled a photo album for Naomi’s father, Eric, from the visit to his old home in Stenz and our memorable day careenign around Berlin with the greatest fans of the Tennis Borussia soccer club.

The more I thought about Germany, the more questions I had. Imponderables of the Holocaust and Germany’s role in Europe’s current slide toward terror accommodation interest me less than the mysteries of personal history:

I talked about the visit with relatives who recalled stories about family members born in Europe. My great-grandfather, Lehman Michelson, born in Posen, Germany, returned several times. Why? Who did he see? Did family members remain after he moved to Texas? Through Ancestry.com I located Lehman’s 1921 passport application, which said he was born in Germany and immigrated to the U.S. in 1878 and was naturalized in 1896 in Bastrop, Texas. He wanted a passport for travel to England, France, Germany, Belgium and Switzerland. What drove that itinerary for an ailing man (he died in 1923)? His name appears on an April list of U.S. passengers bound from Antwerp on the S.S. Zeeland to New York. The Michelson family tree stops with his parents Jacob and Eva (Bernstein) Michelson; I don’t know of any siblings or other relatives. 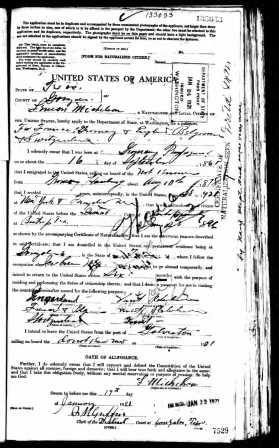 And then there’s Uncle Max Luft, a mild-mannered man from Czechoslovakia who was married to my maternal grandmother’s sister, Ruth. I knew Uncle Max mainly as a man who had managed a vanilla bottling plant, Lotus Manufacturing, in San Antonio, and his fondness for naps while Aunt Ruth played poker with her sisters and my mother. Yet I heard he had rescued or resettled refugees in San Antonio. Who, why, where? How can I get details about this?

I follow the news from Germany, such as the anti-Islamization marches by the PEGIDA (Patriotic Europeans Against the Islamization of the West) in Dresden, the bustling Israeli-flavored Jewish culture in Berlin, and the frequent attacks against Jews everywhere. Essays about Jews afoot in Berlin are popular these days; you’re reading evidence of that. I’ve ramped up my reading on the war era, with books on Dresden, The Fall of Berlin 1945 and The Brigade, about the Jewish execution squads that hunted down SS and Gestapo members immediately after the war. I read Refuge in Hell and gained a great appreciation for the movie-ready drama of the Jewish Hospital.

I would like to return to Berlin to see more neighborhoods, more museums, more conversations about life in Faust’s Metropolis, perhaps learning some German before I go. I think of it as Birthright Germany: Part 2. Closer to home, I became a member of the Center for Jewish History, which includes the Leo Baeck Institute to which I donated Rena’s papers.

The old soldier formerly known as Erich Leiserowitsch, meanwhile, mines his refreshed memories of Stenz, his escape and return as a GI for an ongoing memoir-writing class. He joins other veterans in presentations at area schools; the kids are always amazed when he shows them century-old photos of soccer star Sim Leiser. Interviews over the years with U.S. and German media also preserve his story.

I still think about the trip often, submerging into history. The names and places of history are more concrete, with people behind them, both the Jews and the Germans. From Dresden and Stenz to Berlin and Rena’s Jewish Hospital, I found a welcome, a sense of life stubbornly holding on and rebuilding, after destruction I cannot imagine.

Like I said, give people a margin of hope, and they will survive and go on.