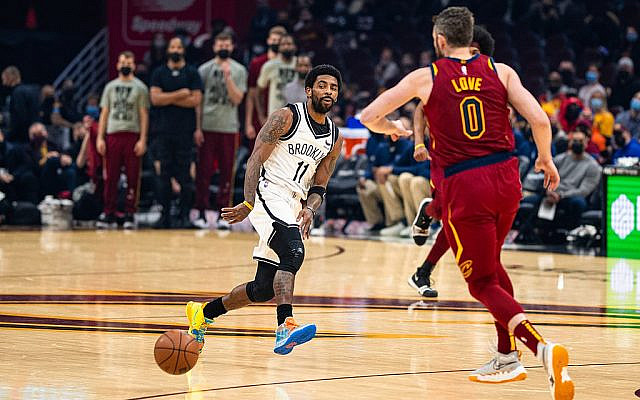 There are some Jews who are actually black and proud about it, and not like Kyrie Irving, Kanye West and some other self proclaimed imposters, rallying under the flag of the so called Blag Hebrew Israelite movement, basically an anti-Semitic movement vituperating Ashkenazi Jews calling them Edomites instead of Israelites, abnegating their Jewish identity and labelling them as imposters.

With several years of racial hatred and violence behind them, this movement continues, to obfuscate history so as to change it, and remove the existence of Ashkenazi white Jews from it, they keep on giving hateful statements like what rapper Kanye West a self proclaimed Jew, gave in the interview he gave to conspiracy theorist Alex Jones, when Jones questioned the rapper’s support for Hitler and Nazism, to which West gave a long-winded answer about what he called the Nazi leader’s “good” qualities and concluded with “I like Hitler.”

“Every human being has value to bring to the table, especially Hitler,” the Spanish EFE news agency quoted West as saying.

The rapper also at another point in the interview denied that Hitler’s Nazi Germany killed 6 million Jews, describing it as “factually incorrect.” In Germany, such statements denying the Holocaust are illegal. In a now-deleted tweet, Kyrie Irving shared a link to “Hebrew to Negroes: Wake Up Black America,” a 2018 film that claims to prove that certain people of colour, including Black Americans, are the true descendants of the biblical Israelites. The film also alleges that Jews have conspired to oppress and defraud Black people, including through the transatlantic slave trade, and that Jews have falsified the history of the Holocaust to “contain their nature and protect their status of power,” according to the Anti-Defamation League. 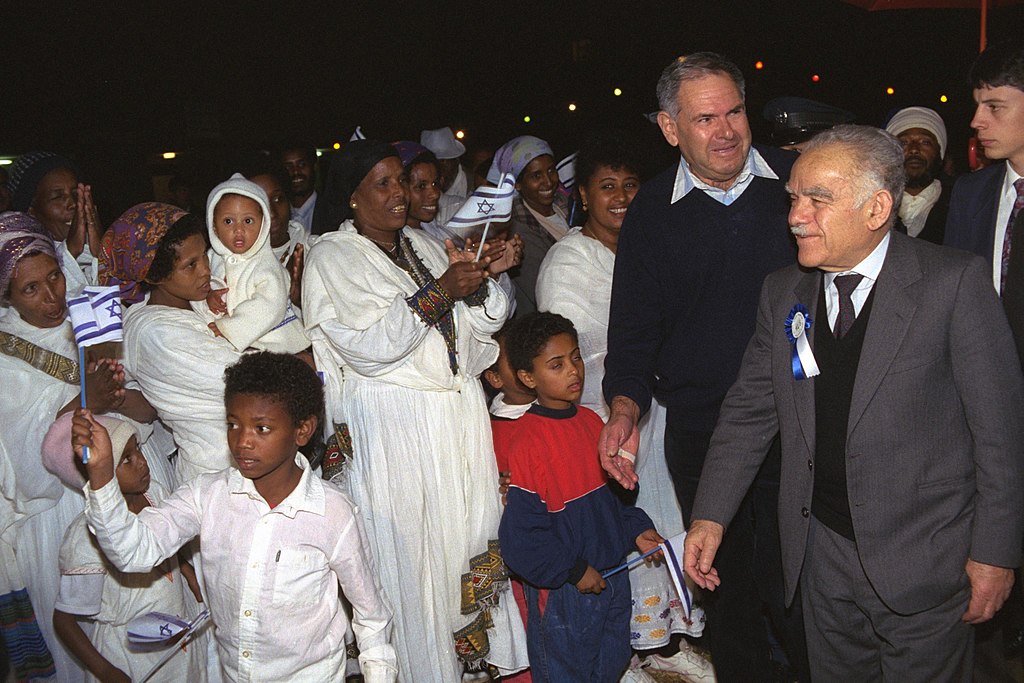 As mentioned in the first paragraph there are indeed several real Jewish communities such as  Zakhor of Timbuktu in Mali, the Igbo of Nigeria, the House of Israel of Ghana, the Tutsi-Hebrews of Rwanda, the Lemba of South Africa and Zimbabwe, the Abayudaya of Uganda, Descendants of David of Madagascar, Jews of Rusape of Zimbabwe, Baluba Jews of Congo, Israelites of Cameroon, Israel Friendship Society of Cape Verde Islands, Beith Ibrahim of Kachane Ethiopia. The question that many readers must be having is how did these Jews reach different parts of Africa? The answer is in the Biblical narratives and prophecies that mentioned the commonly believed existence of Jews in the land of Kush (i.e., Africa) provided the scriptural foundations for subsequent complex connections between Jews and Africa.

Isaiah’s conjecture over the location of the tribes (Isaiah 11:1-12) explicitly asserted the existence of a Jewish presence in the land of Kush, which he differentiates from Patros, the term for Upper Egypt, and he announces the final return of this Diaspora to Zion: “In that time shall the present be brought unto the Lord of hosts of a people scattered and peeled, and from a people terrible from their beginning hitherto; a nation meted out and trodden under foot, whose land the rivers have spoiled, to the place of the Lord of hosts, the mount Zion” (Isaiah 18:7). Zephaniah also, identifying Kush as a tribe’s exile location, prophesies the rally of the Kush population to the Hebrew religion: “From beyond the rivers of Ethiopia my suppliants, even the daughter of my dispersed, shall bring mine offering” (Zephaniah 3:o). Various interpretations of these passages came to be essentially important components of the context in which the story of the Lost Tribes in Africa was cast and elaborated. 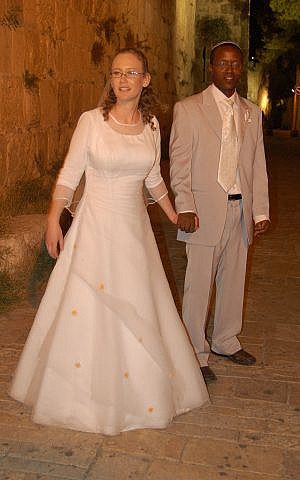 A bride and groom in Jerusalem. Image Credits: Hagitavr369 via Wikimedia Commons.

Ethiopians believe that the founder of the royal dynasty, whose last ruler was Haile Selassie, was the son of King Solomon and the Queen of Sheba. According to legend, their son, Menelik settled in Ethiopia and brought with him members of the Israelite tribes. He also smuggled the Ark of the Covenant out of Jerusalem and brought it to Aksum, the capital of ancient Abyssinia, the Beta Israel do not accept this story. Some theorists trace the Ethiopian Jews’s ( Beta Israel’s  ) origins to the Exodus from Egypt, claiming that a band of Hebrews headed south rather than across the Sinai desert, ending up in Ethiopia, the land of Moses’ Cushite (Ethiopian, perhaps) wife mentioned in Numbers 12:1. There are several other theories about how Jews reached Ethiopia.

As far as scientific studies are considered the author would like to mention one, on the Lemba Jews of South Africa. The Lemba are a southern African Bantu-speaking population claiming Jewish ancestry the study by Spurdle AB, and Jenkins T. titled “ The origins of the Lemba “Black Jews” of southern Africa: evidence from p12F2 and other Y-chromosome markers. Am J Hum Genet. 1996,”  suggests that > or = 50% of the Lemba Y chromosomes are Semitic in origin, approximately 40% are Negroid, and the ancestry of the remainder cannot be resolved. These Y-specific genetic findings are consistent with Lemba oral tradition.

As per Jacob Dorman, a scholar and author of “ Chosen People: Rise of America’s Black Israelite Religions, the first wave of the movement came out of the Holiness Movement in the 1890s,  during the Harlem Renaissance, the second wave centred around rabbis who were followers of Marcus Mosiah Garvey, founder of the Universal Negro Improvement Association and the third wave formed in the 1960s and 1970s, with the first groups calling themselves Black Israelites as opposed to Black Jews. As per Heidi Beirich, director of the Southern Poverty Law Center’s Intelligence Project Black Hebrew Israelites claim to be from the Twelve Tribes of Israel, who will one day be given dominion by God to rule over the Earth,” . “They believe that Jewish people are ‘fake Jews’ imposters who will be supplanted by them in the future,” Beirich added. “They also believe that God will make whites, who these groups consider spawns of the devil, into their slaves, forced into eternal servitude.” . On a chance intersection in January 2019 in US of one very particular subgroup of Black Jews—the Black Hebrew Israelites; some participants in the Indigenous People’s March; and a group of pro-life Catholic high school boys from Kentucky, in front of the Lincoln Memorial in Washington, D.C. The Black Hebrew Israelites merrily saluted the Native Americans as descendants of the Lost Tribes of Israel, cursed the schoolboys as white “Edomites,” and found themselves on the TV sets of anyone in the United States who happened to tune in to the day’s news.

Black Hebrew Israelites are not Jews and Black Jews are not the same as Black Hebrew Israelites. White people and white Jews are commonly referred to as “Edomites” or descendants of “Esau” and biblical enemies of Jacob (Israel). They are described as hairy and ugly, and some teachings of BHI believe that Edomites will become slaves in heaven.

BHI teachings become explicitly hateful when coupled with racial superiority and accusations against white individuals and specific hatred towards the Jewish community. Extremist Black Hebrew Israelites assert that white people are agents of Satan, Jews are liars and false worshipers of God, and Blacks are racially superior and the only true “chosen people.” Judaism is frequently referred to as the “synagogue of Satan.” Stolen identity is a central piece of the ideology and the basis of animosity towards Jews. Among the commonly cited passages used to justify this hatred: Revelation 3:9 “Behold, I will make them of the synagogue of Satan, which say they are Jews, and are not, but do lie; behold, I will make them to come and worship before thy feet, and to know that I have loved thee.” The Sicarii Black Hebrew Israelites also known online as Sicarrii 1715, are a San Diego-based anti-Semitic and racist fringe religious group whose followers believe that Blacks, Hispanics, and Native Americans are the true descendants of the 12 Tribes of Israel. The hate grouo, predominantly based in California, has roughly 15-20 members who actively participate in weekly public demonstrations in downtown San Diego and hundreds of followers online. These events generally involve Sicarii leaders using amplified sound to heckle passersby and broadcast their hateful rhetoric. The Sicarii believe Bible references to the “wicked” are actually allusions to white people, whom they refer to as “the devil.” The rise of anti-Semitism in US lately is a cause of  significant concern, and the propaganda and violence done by Black Hebrew Israelites against White Jews, is a reason among others for this significant concern. We need to educate people who the actual Black Jews are, and prevent these imposters Black Hebrew Israelites from harming the Jewish community. 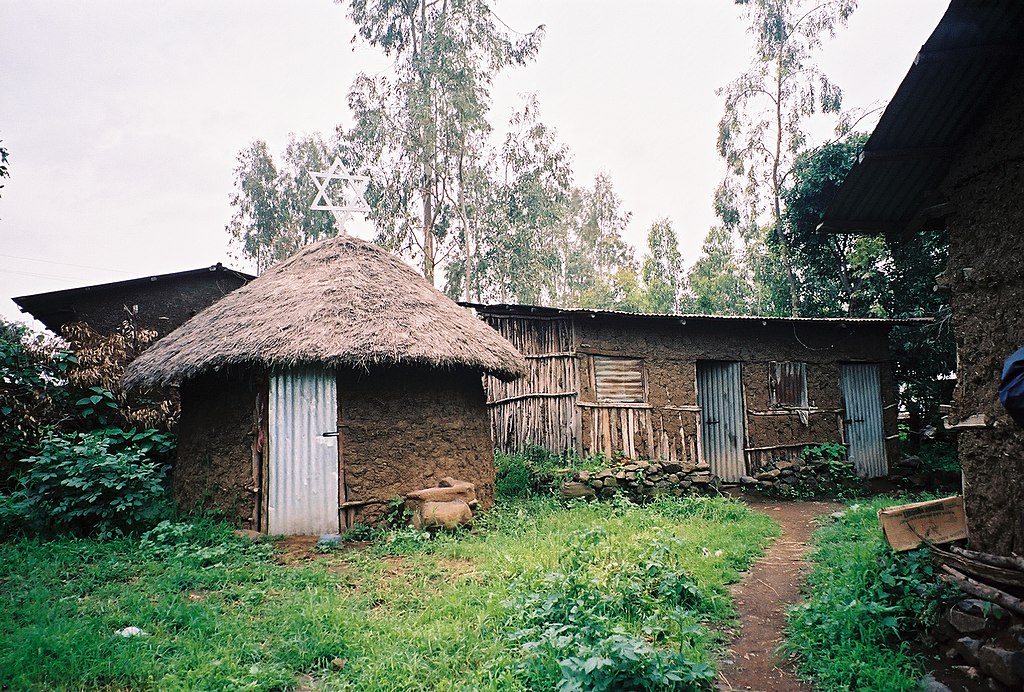 Synagogue in the village of Wolleka in Ethiopia. Image Credits: Marc Baronnet via Wikimedia Commons.

Those who have watched Red Sea Diving Resort on Netflix must have an idea about how Israel saved Black Jews. On November 21, 1984, Israel launched Operation Moses, the first of several covert missions to bring Ethiopian Jews to Israel. The collaboration among the Mossad, the CIA and Sudanese State Security uses more than 30 aircraft to carry almost 8,000 people from refugee camps in Sudan to Israel via Brussels. Operations Moses and Joshua together airlifted about one-third of the Ethiopian Jews to Israel. In May 1991, Operation Solomon carried 14,000 Ethiopian Jews directly to Israel in military aircraft. Subsequent efforts enabled most of the remaining 8,000 members of the Ethiopian Jewish community to make aliyah.

Black Jew of Ethiopian ancestry Lt.- Col. Avraham Yitzhak, a physician who was born in Ethiopia and moved to Israel in 1991 at the age of 19, was appointed by IDF Chief of Staff Lt.-Gen Gadi Eisenkot to serve as chief medical officer of the IDF Southern Command. Some 89 percent of young Ethiopians do IDF service, a rate considerably higher than the general population. Israeli Armed Forces is focusing a lot on assimilation of the Ethiopian Jews. Several Asiatic Jews from India have also found acceptance in Israel, though the Jews of colour still need better support from Government of Israel, and Bharuch Hashem they will get it. But time has come to stop the hateful and violent Black Hebrew Israelite movement, because Ashkenazi lives matter too, like all other lives.  Racism needs to be obliterated as soon as possible, and any form of “colour” based supremacy should not be accepted and defeated, May it be White, Black,  or of any other colour, in India we say “Vasudhaiv Kutumbakam” meaning the entire world is one family. The world needs to work for peace we can do it and we must do it.