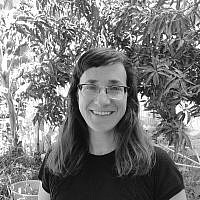 The Blogs
Tovit Neizer
Apply for a Blog
Advertisement
Please note that the posts on The Blogs are contributed by third parties. The opinions, facts and any media content in them are presented solely by the authors, and neither The Times of Israel nor its partners assume any responsibility for them. Please contact us in case of abuse. In case of abuse,
Report this post. 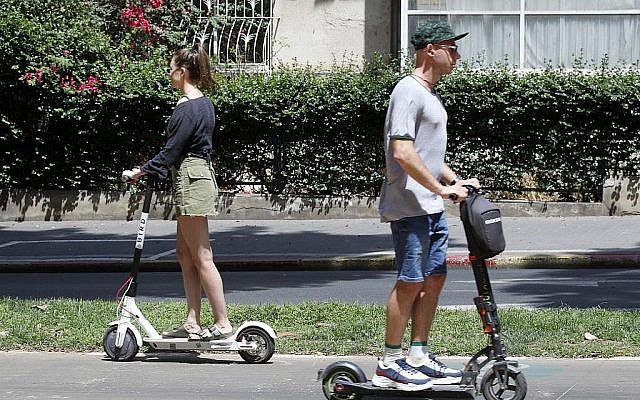 People ride electric scooters in the streets of the Israeli coastal town of Tel Aviv on May 30, 2019 (JACK GUEZ / AFP)

Last week I met with a friend of mine, Dror Carmeli, a blind man with his guide dog and we walked the streets of Tel Aviv. While waiting for a green light, I realized the city is so noisy he could hardly hear the sound of the traffic light. “It’s green now” he informed me “but it’s the sound of the other crossroad, not the one we’re waiting for.”

Quite confusing. Add to that the noises of a truck going in reverse and the underground renovations everywhere, and you’ll be lost. We crossed the road safely, but then I saw a shared scooter that stood in the middle of our way. “They’re everywhere,” he said.

I thought of all the scooters I encounter walking in the streets of Tel Aviv — left behind, standing in the middle, thrown on the ground or piled up and blocking the way. I thought of the San Francisco people who raged against these vehicles, some literally left shit on them, some jammed their electrical wires and others threw them in the ocean.

I asked him how it is that Israelis who are known for their chutzpah have not yet revolted against these hazards. “Someone left a scooter at the entrance to my building,” he told me “I came to pick it up and throw it in the trash in response, but it was so heavy! “

Scooters scattered without care is not a rare event. Think of young parents with a baby stroller on a narrow sidewalk blocked by a scooter, who now have to get off the road to continue on their way.

Think of a young girl who is just now learning to ride a bike and further down the trail lies a lone scooter.

Think of an old man walking with his caregiver and unable to move forward because some scooters had gathered in the middle of the sidewalk.

And think of a wheelchair-bound person whose road is blocked.

The sidewalk has long been out of pedestrians’ reach. And pedestrians don’t always have the energy or time to revolt. It happens every day all over Tel Aviv and beyond.

And it’s not that you’ve become grumpier with age, and you’re not imagining that the situation is only getting worse – it is.

Just this week I saw a brand new player join this bunch of e-scooter brands. If until now BIRD spread its wings in the streets, LIME added fresh acidity, and WIND blew through the crossroads, the new brand, DOTT, definitely added a full stop to our movement.

There is no more room to walk safely for the simple reason that anyone who finishes a trip with a shared scooter leaves it right where he stopped.

The DOTT scooter, probably as part of the launch campaign, offers to try it for free. And it is definitely tempting — after all, we’re all in a hurry to get somewhere.

And if it does not cost us money and does not require a single drop of solidarity, why not try it and leave it at the end of the trip wherever we feel like it, blocking the entrance to a building or a bus stop?

Municipalities may be working to regulate the issue of designated parking (an area where one has to return the scooter or otherwise the rental time continues), but the solution is far from being complete.

Go for a walk in eastern or southern Tel Aviv and you will encounter a jungle of scooters left on the sidewalks. It is puzzling since every new business in Israel should arrange permits and licenses before it starts operating and not while moving on the sidewalk.

And it’s weird since other shared vehicles are well regulated: when I ride with Tel Ofan (a Tel Aviv shared bicycle) I have to put it back in place, otherwise I will be charged for active rental time.

The same applies in the case of shared cars Car2Go and Autotel. If I don’t return the vehicle to a designated parking spot, I will be charged.

The ministry of transportation (which has not yet responded to my questions on this issue) and the local authorities should have had a solution in place to regulate this – before allowing companies to operate in the streets. But it did not happen.

So maybe some hope would come from the companies?

In an age of employer branding and corporate responsibility, it is worth thinking about the ecosystem in which you operate – the city, the streets and the pedestrians – and see how you as a brand keep the place tidy and accessible.

It is not enough to offer a free ride for new users. We are all pedestrians at some point in the day, both those who drive a Tesla and those who ride electric bikes.

At one point we will walk on the sidewalk with our little daughter or our grandfather. And at that point, we will want the basic right of walking on the sidewalk and not between abandoned means of transportation.

June 6th marks the day of awareness and empathy with the blind and visually impaired in Israel. But you don’t have to be blind to suffer from these hazards. And it is very easy to fix this ordeal – starting yesterday.