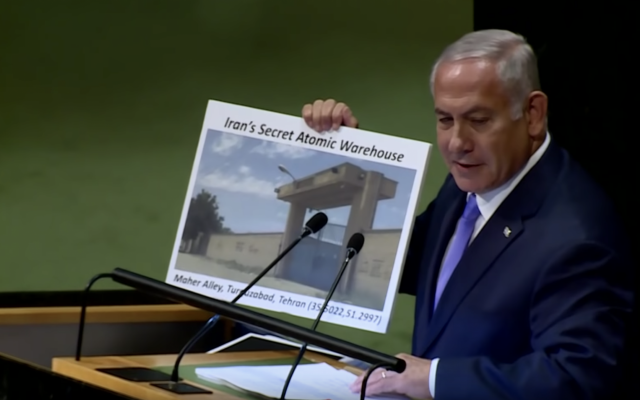 Prime Minister Netanyahu gave a bold speech at the United Nations yesterday–may Hashem bless him and all the protectors of the Holy Land.

In the speech, Netanyahu reaffirmed the special friendship and alliance between the United States and Israel. He also called out the terrorists and their sponsors, the enemies of peace: Iran, Hezbollah, and Hamas.

Netanyahu once again disclosed to the world the complete sham and disgraceful Nuke Deal with Iran of 2015. Following up the prior disclosures of Israel’s incredible raid that netted over 100,000 pages detailing Iran’s nuclear weapons ambitions and program, yesterday Netanyahu now revealed a secret Iranian nuke facility site hidden inside a rug-cleaning warehouse right inside Tehran (Netanyahu even gave the address).

He encouraged the IAEA to do their job, inspect the site immediately, and disclose the illicit and dangerous WMD activities by Iran. Despite the Iran deal, it is incredible that just inside this one Iranian nuke facility are 15 shipping containers of secret Iranian equipment and material–that’s over 300 tons worth! Netanyahu also revealed 3 secret missile sites in Beirut, Lebanon, right around their international airport, continuing the terrorist trend of using civilians as shields.

As Iran continues to develop its nuclear weapons program and sponsor terrorism around the globe, as PM Netanyahu promised, Israel and the U.S. are on to them, and they will not let it happen!  A little more than 70-years after the Holocaust that murdered 6,000,000 Jews, Iran will not be allowed to pose an existential threat to Israel and a danger to the entire world.

Let’s hope that peace can prevail and that the good people of Iran will be able to take back their country soon from the tyrannical and repressive regime. The alternative is that Netanyahu’s blowout of Iran yesterday at the U.N. General Assembly will end up being just a prelude to a genuine blowout of the Iranian nuclear weapons facilities themselves.

About the Author
Andy Blumenthal is a dynamic, award-winning leader who writes frequently about Jewish life, culture, and security. All opinions are his own.
Related Topics
Related Posts
Andy Blumenthal
Comments