The Blogs
Michal Kohane
Apply for a Blog
Please note that the posts on The Blogs are contributed by third parties. The opinions, facts and any media content in them are presented solely by the authors, and neither The Times of Israel nor its partners assume any responsibility for them. Please contact us in case of abuse. In case of abuse,
Report this post.

Tish’a Be’Av – the 9th of Av – is somber. Once upon a time, a glorious Temple stood in Jerusalem. It emanated Light, Goodness, Hope, Spirituality. And it was destroyed, forever changing the destiny of the Jewish people. Since then, and because of that, we’ve experienced exile, enslavement, mockery, riots, pogroms, discrimination, systematic destruction all the way to the Holocaust. Millions have died through no other crime other than being Jewish. In light (or dark-) of all this, discussing the pain of some 8600 people might seem almost sacrilegious.

Sixteen years ago, then-prime-minister Ariel Sharon almost single-handedly ordered Israel’s “Unilateral Disengagement”, dismantling 21 Israeli settlements in the Gaza Strip – “Gush Katif” area – and the evacuation of Israeli settlers and IDF forces from inside the Gaza Strip. By some strange coincidence / cruelty / random drawing of lots / a desire to bury the story of a day observed largely by the religious ones ? the date chosen was no other than the 9th of Av. Once realized that this was what that particular Gregorian calendar date translated into, the execution of this operation was postponed to begin on the 10th of Av.

The Talmud, in tractate Ta’anit 29:a holds a discussion, is the 9th of Av the worst day or the 10th?

And on the ninth, adjacent to nightfall, they set fire to it, and it continuously burned the entire day, as it is stated: “Woe unto us, for the day has declined, for the shadows of the evening are stretched out” (Jeremiah 4:6). This verse is interpreted as a prophecy about the evening when the Temple was burned.

And this is what Rabbi Yoḥanan meant when he said: Had I been alive in that generation, I would have established the fast only on the tenth of Av because most of the Sanctuary was burned on that day. And the Sages, who established the fast on the ninth, how do they respond to that comment? They maintain that it is preferable to mark the beginning of the tragedy….

Our family was in Israel that summer. All over the country, there were banners of blue and white and orange, the color of those opposing the disengagement; and some banners of all three, expressing pain for those evacuated (some would say “relocated” and some would say “exiled”…). At almost every intersection you could come across people giving out flyers and asking for support to avert the decree. Others expressed their frustration with the “settlers” who “kill every good deal”.

I admit, I was very torn, extremely pained yet trying to be hopeful. A couple of years before, we visited friends in Atzmona, in the southern- west side of the “Gush”. Regardless of political opinions, the settlements were just beautiful. Red roofs, lush gardens, greenhouses, exuberant creativity of the pioneering, loving, kind, idealistic people living there. They were a sign of hope; of positive action against all odds; of our ability to still “make the desert bloom”. Among the sand dune, there were synagogues and schools and kindergartens, arts and music and nature. The idea that we, by ourselves, will destroy synagogues… Synagogues! “unilaterally”! with no idea what’s coming, was harsh. But, (isn’t this what we were taught??) if it’s all for peace and safety and well-being, ours and our neighbors, then, oh well, no matter the pain. It’s all worth it and we’ll do it.

The process itself was accompanied by many tears and cries, on all sides. Not only the departing settlers, looking back at the bulldozers crushing their homes, but the soldiers as well, at times, holding a baby, hugging a mother, reaching out and holding an elder’s hand.

The whole saga lasted about a week. A few more days, and the dust settled. The settlers were given generous promises for “packages” that will allow them to rebuild and resettle elsewhere. The Palestinians danced and rejoiced. And all was well.

But now, that 16 years have passed, the euphoria has settled with the dust, and in its stead, grew many doubts. Following the withdrawal, Hamas, an organization founded to establish an Islamic state in lieu of the Jewish state, on the area that is now Israel, was elected as the Palestinian government. Our neighbors in Gaza did not respond to the generous, painful move with safety, peace, love and flowers, but with rockets, explosives and tunnels to pass ammunition and cause damage to us, demanding “more” Jewish disappearance, all the while blaming Israel for “not doing enough”.

On the other hand, the people who went to settle this region following the government’s encouragement were not given the benefits they were promised. 16 years later, many are still battling unemployment, temporary housing in rural areas, poverty, depression, disillusion, feeling betrayed, left behind and a general “down”, while terror continues.

It’s a small story. A modern Israeli tragedy that’s off many’s radar. Compared with the Temple’s destruction, and on the long stretch of pogroms, the Holocaust and more, it might seem trivial; a blip on Jewish history. And with current politics, it’s probably not even PC to mention it. Not to mention that Tish’a Be’Av is still mostly is day of the dosim, the more religious ones.

And yet, especially today, it’s hard for me not to think back and wonder, what happened? Did we actually do the right thing, for ourselves not only for others, or did we overpay for something we didn’t get? And, where are we now? What’s our vision going forward?

May we be comforted in the redemption of the Land and its people. 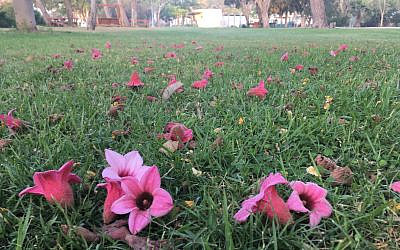 About the Author
Currently a "toshevet chozeret" to Israel, Michal Kohane is a graduate of Yeshivat Maharat, teacher of Torah and Talmud in Israel and abroad, and chaplain in training. She holds several degrees in Jewish / Israel studies and psychology, and has been a leader and educator for over 25 years. Michal’s first novel, Hachug ("Extracurricular") was published in Israel by Steimatzky, and her weekly, mostly Torah, blog can be found at www.miko284.com.
Related Topics
Related Posts
Comments
Advertisement