The question each of us must ask, why humanity’s compassion is off course.

Most of us are familiar with the Book of Esther story and its spirit. It tells the story of a orphan young Jewish woman, born Hadassah and named Esther, who married Ahasuerus, the king of Persia (reigned in approximately 486–465 BCE) and became the queen of Persia.

The biblical Book of Esther, also called the Megillah, is set in the third year of Ahasuerus’ reign when Esther and her uncle Mordecai thwarted an evil plan of Ahasuerus’ prime minister, Haman, to commit genocide against their people, the Jewish nation. The Book of Esther is the basis and an integral part of the Jewish nation’s celebration of the festival of Purim, its full text is read aloud twice, during the celebration, once in the evening and again the following morning.

On Purim this year I went to hear the reading of the Megillah in the evening and the following day I went to hear its 21st century extension, as told by Dr. Ari Babaknia in his book ‘Humanity NOT’.

Genocide is a word many use lightly. Not all genocides are thwarted as in the Book of Esther. Genocides have occurred and reoccur throughout history, the most dreadful one is the 20th Century World War II, The Holocaust, in which 6 million Jews, who had nothing to do with the war, perished, in the most horrendous systematic murder methods just because they were Jews.

At the hospitable home of Moiz and Fay Talei in Los Angeles, a large group of Iran born Americans came to listen to Dr. Babaknia who left a successful medical practice to pursue the answer to his burning question, which he carried in his heart for years, WHY the Holocaust happened? Why people hate each other without even knowing them and the hate is so deep, they perpetrate genocide? 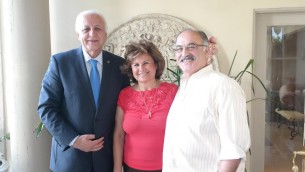 After 20 years of extensive research and becoming a Holocaust scholar, Dr. Babaknia has many ways to answer this burning question. He founded the Memorah Foundation and wrote two noteworthy books on the subject, aimed to change the world. One, a 4-volume book, in the Farsi language, serving the unanswered curiosity of 150 million Farsi speaking people who, till his book came out, did not have a documented literature, in their own language, on the subject of the Holocaust and other genocides. His latest book, ‘Humanity NOT’, in English, is being translated to many other languages, starting with those languages spoken by people who carry deep anti-Semitic sentiments, i.e. Arabic, Farsi, Turkish, French, Hungarian, German.

The book ‘Humanity, NOT’, brings to light, in words and images, illustrated by the world renowned Iranian-Moslem artist, Ardeshir Mohassess, the captured emotions of the victims, perpetrators, bystanders, and survivors of the Holocaust, told in their own words. Reading first-hand horrifying experiences of the victims, as well as some thoughts from philosophers and scholars, will help every human being on earth to finally understand that the Holocaust was a human tragedy. That reaction to the Holocaust has to be other than mere horror and revulsion. It has to be more than empathy with the victims; sharing their fears and some part of their actual suffering and having compassion can become part of the long treatment that will bring about the cure to the most horrific disease humanity suffers from, which is HATE.

The book Humanity NOT

Until such time when society cures itself of hate and the wish to go kill those it does not know why it hates and wants to kill, genocide will continue limitlessly.

Dr. Babaknia strongly believes that humanity failed itself and its children. Lacking the proper teaching brings about a genocide.

By writing the book ‘Humanity NOT’, Dr. Babaknia has started the healing process; join him on his journey.

About the Author
Nurit is an advocate for Jews, Israel, the United States and the Free World in general and sees Israel and the United States, equally, as the last two forts of true democratic freedom. Since 2006, she has been writing about events in these two countries. From Southern California, Nurit believes that if you stand for nothing, you will fall for anything.
Related Topics
Related Posts
Comments
Advertisement